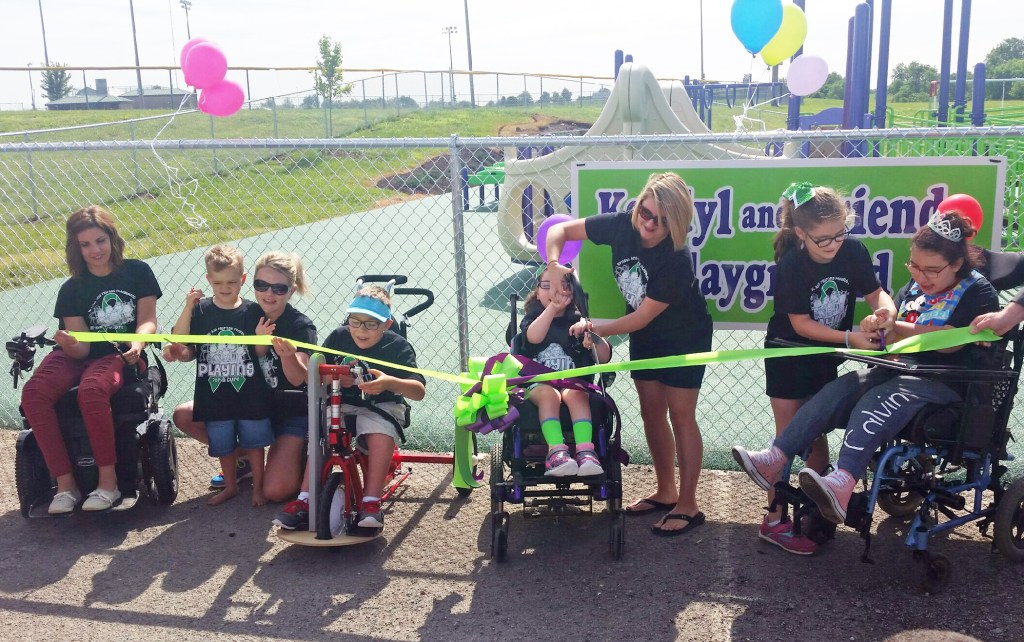 The sound of children laughing and yelling is common on a playground; what isn’t common on most playgrounds is the sight of children in wheelchairs. But on Monday, the Kendyl and Friends Adaptive Playground opened at the Anderson-Dean Park, made especially for children with disabilities.

Crimson Claycomb, mother of Kendyl, the namesake of the playground and the Kendyl and Friends Foundation, called the play area “a blessing.”

“We are thankful for all the donors,” she said. “This is a huge accomplishment.”

The Kendyl and Friends Adaptive Playground features swings for those in wheelchairs, swings with harnesses for those who might not be able to sit in a regular swing, a ground-level merry-go-round, and ramps, all over a recycled rubber ground covering. The area is fenced in and features a wide gate and a sign reminding visitors that the playground is for individuals with disabilities and their families.

The playground’s inspiration is Kendyl, who is severely disabled due to a meningitis infection she suffered as an infant and is now in a wheelchair. Claycomb said her daughter wasn’t supposed to make it to 3 months old, but is now 7 years old.

“This is what it’s all about,” she said, after they cut the purple and green ribbons — Kendyl’s favorite colors and her awareness ribbons for epilepsy and cerebral palsy — to officially open the playground.

When they began planning the playground on June 1, 2016, Claycomb said people told them it would take three to five years to raise the $250,000 needed. It took five months and 22 days.

That’s a testament to the community, said Tim Horn, a donor. He was one of 12 volunteers who Claycomb said put the playground together in 50-degree, rainy weather.

“It was rewarding,” Horn said. “It’s amazing the people that came out and how hard they worked — everyone put their egos aside and everyone worked together. This was a community effort.”

Tabitha Doan and Heidi McKenzie said they were happy to see the playground open.

“This is amazing — having the kids be able to come experience a playground and it be for them,” said McKenzie. “It lets them dream.”

She said it was great that Claycomb had the dream and saw it through; there are few other playgrounds like it around.

“I’ve never seen anything like this,” Doan said, agreeing.

McKenzie, who is in a wheelchair, also took a turn on the merry-go-round and the swings.

“It’s fun for all ages,” she said, laughing.

Friends Shelbi Hopper and Samantha Travillian, both 20, said they attended Monday’s ribbon-cutting to see what the new place was all about.

“This is amazing for the community,” said Travillian, as she pushed Hopper in a swing designed for wheelchairs. Hopper suffered severe brain trauma when she was younger, leaving her in a wheelchair and limiting use of her right arm.

For parents like Jessica Black, who’s son Dakota Pollard is paralyzed from the waist down, it’s a blessing.

“It’s amazing,” she said. “I now have somewhere to bring him and his brother to play.”

Black said her family is also grateful to the Kendyl and Friends Foundation, a non-profit organization that was formed to help those with disabilities, because it purchased an AmTryke hand-pedal tricycle for Dakota.

The bike, explained Claycomb, is considered a recreational toy and isn’t something that’s covered by insurance.

Although the playground was one of the first projects for the foundation, Claycomb said it certainly won’t be the last. They hope to continue helping parents and families.

In many cases, one parent will stay home to care for the child while the other works. That, she said, makes it difficult to purchase extra things and things that let kids be kids — like a tricycle.

Dakota, who is 12, had never ridden a bicycle, but now he can pedal himself around.

And he did Monday, around the new playground.

To donate, volunteer or learn more about the Kendyl and Friends Foundation, visit www.kendylandfriendsfoundation.org or find the organization on Facebook.

Kendra Peek/kendra.peek@amnews.com Mercer County resident Samantha Travillian pushes her friend and former classmate Shelbi Hopper on a swing made to for wheelchairs.

Kendra Peek/kendra.peek@amnews.com Tim Horn, one of the volunteers and donors to the Kendyl and Friends Playground project, pushes 1-year-old Luka, while Dakota Pollard, 12, swings nearby.

Kendra Peek/kendra.peek@amnews.com Nadia Parra, a Mercer County student, climbs on the Kendyl and Friends Playground at the Anderson Dean Park. The playground has ramps, wheelchair swings, a ground-level merry-go-round and more so that children with disabilities can also play. A ribbon-cutting was held on Monday, complete with someone doing hairspray, glitter body art and fake tattoos, and giving away tiaras. Other free vendors included Kona Ice and popcorn from Toyota Boshoku.

Kendra Peek/kendra.peek@amnews.com Kendyl rides the ground-level merry-go-round on the Kendyl and Friends Playground while being pushed by students visiting the park on Monday.

Kendra Peek/kendra.peek@amnews.com Kendyl rides the ground-level merry-go-round on the Kendyl and Friends Playground while being pushed by her dad Jeff and some new friends visiting the park on Monday.

Kendra Peek/kendra.peek@amnews.com Kendyl and her mom Crimson Claycomb talk with Heidi McKenzie at the ribbon-cutting ceremony for Kendyl and Friends playground at Anderson Dean Park in Harrodsburg.

Kendra Peek/kendra.peek@amnews.com Crimson Claycomb, center, with her daughters Kendyl, left, and Kaydance Logue, right, at the ribbon-cutting of the of the Kendyl and Friends Adaptive Playground at the Anderson-Dean Park

Kendra Peek/kendra.peek@amnews.com Kendyl, her friends, and students from the special education programs at Burgin Independent School and Mercer County Schools played at the park on Monday.