Patriots back to district championship after five-year hiatus 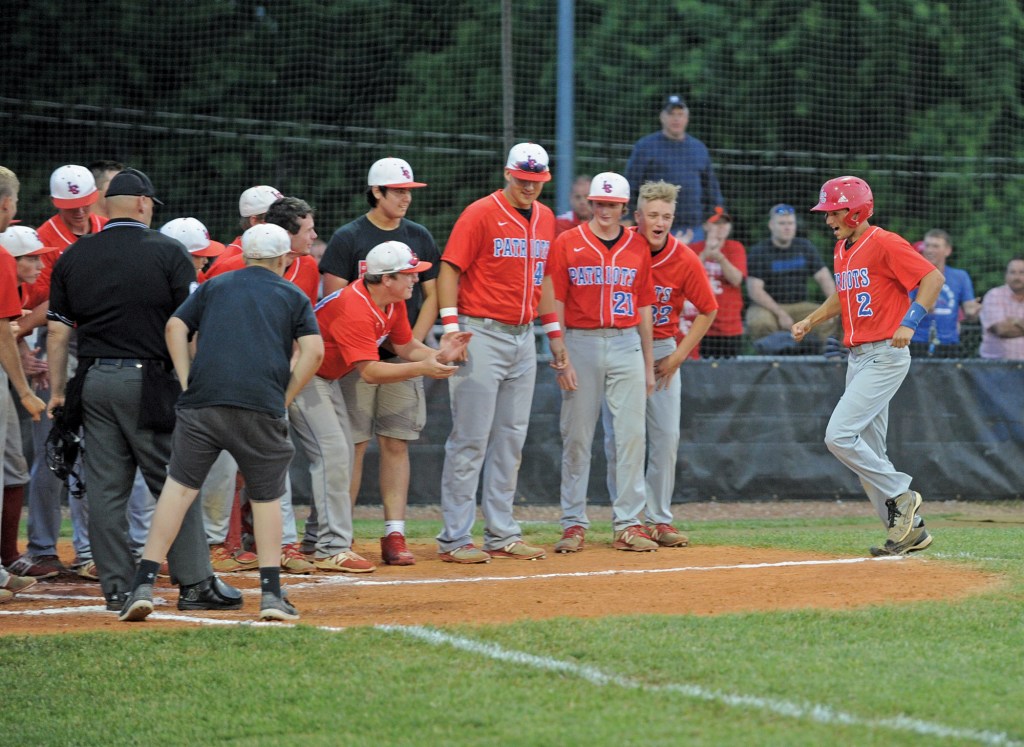 Lincoln County is back in the 45th District championship game.

After a five-year hiatus, the Patriots made a statement Monday, beating host Danville 11-1 in five innings in the district semifinals.

Noah Horton pitched four innings of one-run baseball and Cooper Brown blasted two home runs to give Lincoln its second win over the Admirals in 14 years. The Patriots last victory over Danville in the postseason was in 2003, winning 11-1 in five innings. Danville had made the district championship every year after that game.

“I talked to the boys about how the past doesn’t matter,” Lincoln coach Tee Ellis said. “It’s about this year going forward, one game at a time. That’s how we approach each game and this one was no different.”

The Patriots jumped on Danville starter Zach Dampier early. Although Dampier worked ahead in the count, the first four Lincoln batters reached base.

Cooper Brown hit a two-run home run in the first inning and a solo shot in the fourth, his second and third home runs of the season.

As good as Lincoln was in all areas Monday, Danville was the opposite. The Admirals were able to get runners on base against Horton, but couldn’t find a way to get them across the plate.

“It was just one of those days today, and it definitely wasn’t ours,” Danville coach Paul Morse said. “It was a tough way to end the year, end the long streak we’ve had of going to the regional tournament. It’s bad for your seniors, they don’t want to go out that way, but it’s got to be motivation for your younger guys. They’ve got to work hard and get better because that’s what everyone else in the area is doing.”

Danville finished with three hits and 10 runners left on base.

“With baseball, that happens. On any given night, anybody can beat anybody. Baseball is crazy and every year there’s big upsets on day one of district play. This year, I guess it was our turn.”

Lincoln plated at least one run in all five innings, scoring five in the first frame and three in the fifth. Brown was the standout on the box score but seven batters had at least one hit for the Patriots. Lincoln finished with 10 hits, six walks and three homers.

Ellis was more pleased with the way his team played on in the field.

“We played sound defense tonight. Our game (against Danville) at home, they had two hits against us but they had two runs,” Ellis said. “We put everything together tonight and came out with the win.”

Horton labored through four innings, giving up six walks, but turned the screw when it mattered. He finished with six strikeouts.

“That’s the thing, you’re facing a good pitcher, you’re always wanting to get to him early,” Morse said. “We had opportunities, but he made big pitches and got strikeouts. You can get guys on base, but the equalizer to that is strikeouts.”

Ellis said the strike zone was tight, but Horton did well to prevent walks from becoming too much of a factor.

“He did great, it was tough back there watching some of the pitches he threw being called balls,” Ellis said. “The umpire back there was tight, but he was tight both ways. Noah, to have those walks with that tight zone, I thought that he pitched really well. He didn’t let runners advance, and when he did, he buckled down.”

Danville’s season ends with 20 wins, the second-straight year with at least 20 for the Admirals. Six seniors finished their career Monday night on their home field.

“(Dampier) is a clutch guy and has pitched well, played well for us and had a great senior year,” Morse said. “Lots of our seniors had a great year. (Mason) Schroeder was tops in our region in batting average, third or fourth in the state, great defensive guy. Brian (Baxa) I think still leads our region in strikeouts and hasn’t pitched in a month. It’s a tough way to go out for him. Ellison (Stanfield) is in the top couple in RBIs and hit over .400 as well. These seniors, they didn’t just have great years, they had great careers. You feel bad for them on this day more than anybody.”

Lincoln County will play Boyle County for the 45th District championship, scheduled for Wednesday. Rain might delay the game, and Lincoln’s graduation is Thursday, but Ellis said his team will keep the same thought process no matter what.

“We are back to work tomorrow,” he said. “We’re not settling just making it to region. It’s one game at a time. We’re trying to win the district. We don’t want to be complacent, we want to work for something.”