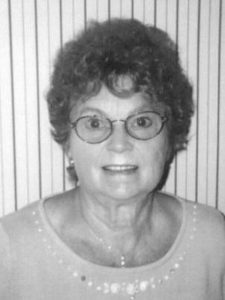 A. Willena Smallwood Cook, 83, a native of Waynesburg, Lincoln County, KY, passed away Friday, May 19, 2017 at Arlington Pointe Assisted Living in Middletown, Ohio. The daughter of Lester & Verna (Mitchell) Smallwood, she was born May 28, 1933. Her parents preceded her in death.

Mrs. Cook was a 1952 graduate of Memorial High School, Lincoln County. She married Kenneth Marshal Cook of Perry County, KY and Waynesburg, KY on July 9, 1952 in Lincoln County. He preceded her in death on February 3, 2006 in Monroe, Ohio. Also preceding her in death were their son, Kelly Ray Cook on October 29, 2013; her sister, Correne (Smallwood) Gross on June 7, 2014; and grandson, Brian Jacob Chamberlain on May 3, 2017.

Mrs. Cook was a 64-year resident of Middletown and Monroe, Ohio and was baptized into the First Baptist Church of Monroe in 1973.

A funeral service will be held at 11 a.m. Friday, May 26, 2017 at Morris & Hislope Funeral Home with Rev. Curtis G. Brock officiating.

Burial will be in Double Springs Cemetery, Waynesburg, KY.

Visitation will be after 10 a.m. Friday at Morris & Hislope Funeral Home.