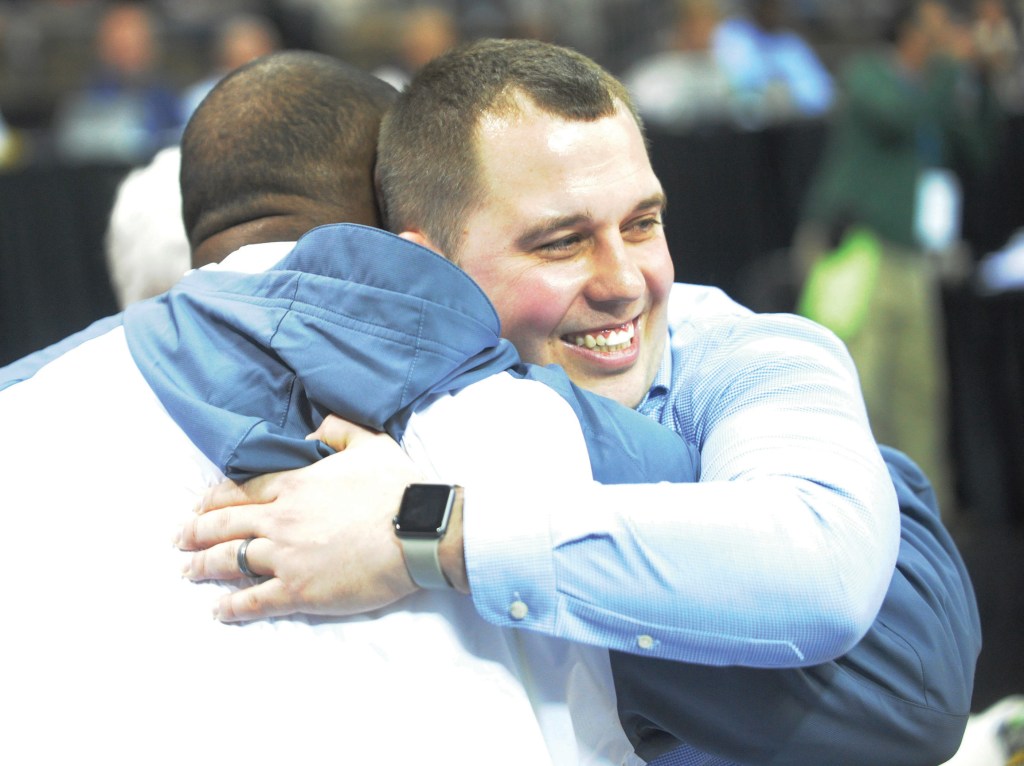 Mercer County didn’t go far when finding the next coach of its boys basketball team, naming Josh Hamlin to lead the Titans.

“Mercer County is a special place,” Hamlin said. “My wife and I have been extremely blessed to get to know some wonderful people here in this community. I am very fortunate to have coached or taught many of the young men who will be playing for our program. Knowing them prior and knowing some of their family members has allowed us to hit the gym running. I believe that having these prior relationships will allow our team to get our system into place faster than if I did not have those relationships.”

In a press release announcing the hire last week, athletic director Donald Wayne Smith acknowledged Hamlin’s familiarity with the program and school system loomed large in their search for a replacement for Kurt Young, who departed after one season to coach at Frederick Douglass in Lexington.

“As a program, we’re looking for the best coach possible, as well as stability,” Smith said. “Coach Hamlin, among other qualities, represents those attributes. He’s a talented, knowledgeable and passionate individual that brings so much to the table. We are so fortunate to have such a strong candidate that is already in our system and has worked in our programs.”

Hamlin is the third coach in three seasons for the Titans, but the changes haven’t hurt their success so far. They went 56-11 in two seasons under Cook and 25-8 last season under Young, and they’ve won three straight 46th District tournament championships.

For Hamlin, continuing that success long term starts much earlier than high school.

“One of my goals to help alleviate some of the ‘growing pains’ that are being said with the program is to establish a solid feeder program,” he said. “The middle school and youth leagues are instrumental in a program’s success. My staff and I understand that if we want to keep Mercer County at the top of the 12th Region that an emphasis must be placed on our younger kids. I think already having relationships built in the community over the last three years will allow us to understand some things that need to be fixed, and go about finding solutions differently than they have been done in the past.”

The Titans averaged nearly 73 points per game last season, and Hamlin said the high octane offense will continue with some of the talent he has coming back, led by Trevon Faulkner.

“One of the things that I want our team to display this summer and during the season is how good of a passing team we can be, and how unselfish they can be. I think fans can expect to see some of the same things that coach Young ran last year as far as pace of play, but our staff has already talked about implementing some different offensive sets that we can run when we have tired legs or our defense is not turning into offense. We are going to try to avoid being stagnant and having empty possessions on the offensive end as much as possible.”

Hamlin’s one season as an assistant for the Mercer girls team helped shape the coach he will be this season. The Titans went 31-6 and cruised to the program’s first state championship, but it was what happened away from the spotlight that Hamlin will take with him.

“The level of hard work and commitment that the girls’ team displayed daily was something special and unique and it caught my eye,” he said. “That is a testament to the program that coach Souder and his staff have built over the years. The girls are extremely talented, which goes without saying, but they are so humble and workmanlike with their approach to the game of basketball. They truly want the best for each player on the team, and they do not care who receives the attention, as evidence by the state championship game performance by so many of our players.

“I hope to instill those approaches in our players this year and into the future. It has been positive to see the level of intensity that has taken place in open gyms and workouts thus far. Rising seniors are holding underclassmen responsible and accountable. Returning players are hungry and intense and great competition is happening daily. Our girls had a very special season last year, but our boys program played for a region championship as well, which is something that we are focusing on getting back to in the very difficult 12th Region.”

‘Long and winding road:’ Boyle will soon decide what…