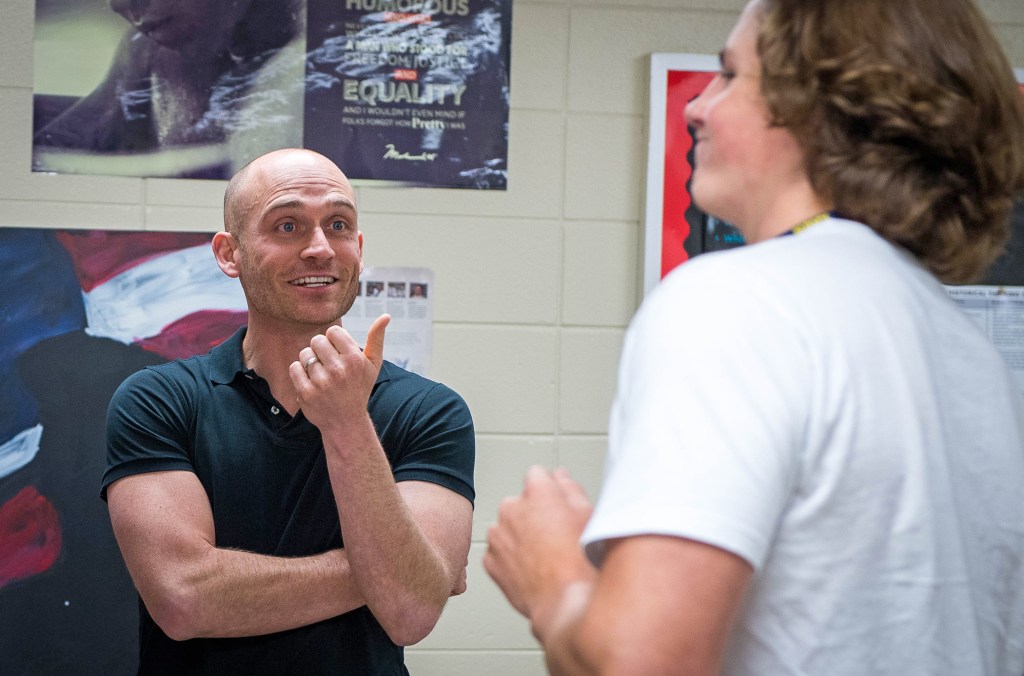 Photo by Bobby Ellis Ryan New, a history teacher at Boyle County High School, speaks with a student during his AP history class. New was named as a semi-finalist for the 2018 Kentucky Teacher of the Year Award.

It was a near-miss for Boyle County teacher Ryan New who was one of the 24 across the state nominated for Kentucky Teacher of the Year — but it’s his passion, not an award that makes him a good teacher, said Superintendent Mike LaFavers.

“Ryan is smart and extremely talented, but what makes him special is his passion for teaching and for his students,” said LaFavers. 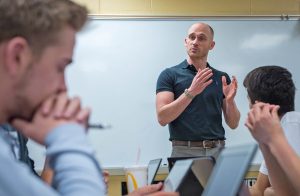 Photo by Bobby Ellis
Ryan New, a history teacher at Boyle County High School, gives instructions to his AP history students during a discussion over different civil rights movements in American history. New, a semi-finalist for the 2018 Kentucky Teacher of the Year Award, opens his class up for debates to help students interact with each other and to help shy students come out of the shell.

New, a social studies teacher at the Boyle County High School, was also one of the top three high school teachers out of eight nominees in the running for the high school winner, which went to Kellie Clark from Randall K. Cooper High School. Clark was also named the overall Kentucky Teacher of the Year.

Belinda Raye Furman, a second grade teacher at Sherman Elementary in Grant County, was named the Elementary School Teacher of the Year; Jennifer Meo-Sexton, a visual arts teacher at Bondurant Middle School in Franklin County, was named the Middle School Teacher of the Year. The two women received $3,000 each and a customized art-glass vase from Valvoline Inc. Clark received $10,000 and a commemorative crystal-glass bowl, and will be provided a sabbatical or suitable alternative for a year. She will represent the state in the 2018 National Teacher of the Year competition in Washington, D.C.

The remaining 21 winners, including New, each received $500 cash awards.

“It was a great ceremony; they do a fantastic job. I’m very happy for the winner,” New said on Friday. “I think (Clark) will be a good voice for Kentucky teachers moving forward.”

Despite not winning, he said he was humbled at being nominated and making the top three among high school teachers.

“I felt very humbled by it, very honored by the nomination process. As I went through it, a lot of people were very kind, said a lot of kind words and were very complementary,” New said. “It always makes what you do feel even more special.”

This is his third year in education, but only his second in the classroom — last year, New worked as a social studies consultant at the Kentucky Department of Education, through a contract with the Boyle County Schools.

New, who teaches AP World History, AP Government and AP U.S. History at the high school, said he thought he was nominated because he tried to do something a little different this year.

“This year, I wanted to do inquiry as largely student-led versus a teacher standing up in class. I made an agreement with myself that I was going to speak only about 25 percent of the time,” he said. “If I have to give 75 percent of my time over to the students then I have to get them ready to master that time.”

“One of the things I try to do is turn over as much of the learning to students as possible. Students really drive the class. I use inquiry-based learning as a way of getting students to become more autonomous in the classroom. For example, every day has questions that we ask — both teacher and student-generated. We look at sources, we compare those sources, pull those sources together, corroborate that evidence, make interpretations about it, and then we communicate those claims or we take informed action and do things within the community.”

Was it a successful experiment?

He said he’s already looking at ways to refine the inquiry-based concept for next year.

“It’s been my favorite year of teaching so far. I found this year, with the students speaking more — I learned to listen in a way that I never thought was there before. I learned just as much from my students this year as they have learned from each other and from me.” 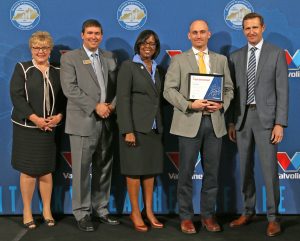 Photo submitted
Boyle County High School teacher Ryan New received his award recognizing him as one of the top three high school teachers in the state and a nominee for the Kentucky Teacher of the Year award. Photographed with New, right of center, are, from left, Education and Workforce Development Cabinet Director Mardi Montgomery, Commissioner of Education Stephen Pruitt, Lt. Governor Jenean Hampton, New, and Chief Executive Officer of Valvoline Sam Mitchell.

New said he enjoyed meeting with Lt. Gov. Jenean Hampton and Commissioner of Education Stephen Pruitt during the ceremony for the Kentucky Teacher of the Year. But having the support of his family, specifically wife Andrea and mom Glenna Decker, was especially important.

“On that day, I was very happy that my wife and my mom were there to see the ceremony,” New said. “Along with Mr. LaFavers and Mark Wade — it was really nice to spend time with them on a day like that.”

New’s wife is a teacher as well.

“She very much understands the demands of teaching,” he said. “… she helped take the load off and gave me more opportunities for classes and meetings, working on applications and some of those other things.”

“They’re fantastic kids. Anything that I’m able to do within the classroom to help students become better thinkers and more rational, I think, will benefit them immensely,” New said. “I’m trying to provide a better opportunity for them in all of this.”

His decision to pursue a doctorate wasn’t motivated by a desire to obtain a certain position in the district, but to obtain better knowledge for his classroom, he said.

“Part of doing something new is that you have to be educated on those things and this is my avenue of becoming more educated. I’m not taking the classes necessarily to move on, it’s just more to refine my abilities as a teacher.”

New said he believes the nomination for Kentucky Teacher of Year wasn’t something he was considered for because of who he is as a teacher — it’s about his students.

“Teaching is a very hard process. I took a risk, my students took a risk this year in doing something very different in the classroom. Being nominated for this is nothing more than a reflection of them and what my students are capable of,” New said. “It’s proof that if you trust your students, then everyone benefits.” 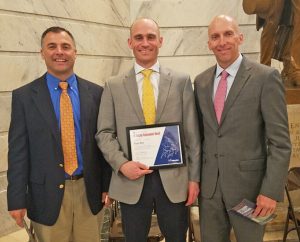