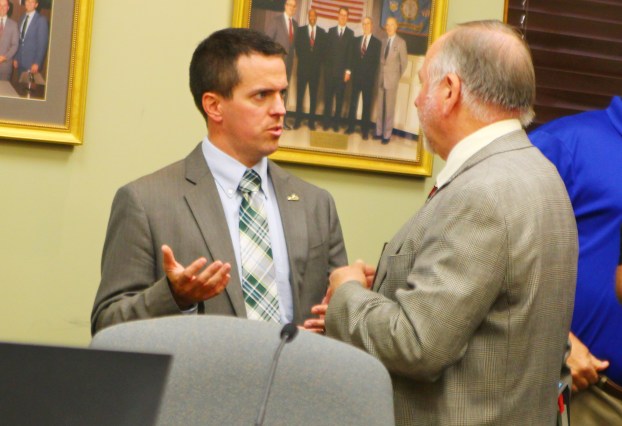 The condemned building at 311 W. Main St. was once again on the Danville City Commission agenda this week, but once again it was tabled without action.

City Manager Ron Scott told commissioners he has now received a plan for restoring the building from attorneys for the owners — something that Mayor Mike Perros said earlier this month had not been received as soon as the city had expected it.

“I did receive on behalf of the owner or potential owner of the building, a communication from their attorney that set forth some specifics with regard to their intent to restore and return that building to a condition that would basically take it out of its current status of being condemned,” Scott said. “However — that response that I received by email had the direction from their attorney that that information was not to be disclosed to the public. It was a restricted communication from his client to the city manager. … I deem that to be inadequate, given the fact that the discussion is in the public venue and has been for a number of years.”

Scott said he commends the owners for showing a willingness to restore the building, but “I do believe that that information should be fully disclosed to the public because the situation is in the public domain.”

Scott said he consulted with City Attorney Stephen Dexter, who agreed that the information should be made public.

“I don’t have that tonight, but I will be presenting that to the city commission, along with any additional information that may be forthcoming from the attorney on behalf of the Hamlins (owners) at the next meeting, and then the city commission can decide what action is appropriate,” Scott said.

Dexter told commissioners it would be common practice “in the private world” for the communication sent to Scott to be kept private, so the request wasn’t surprising.

“It’s not often that attorneys deal with people in the public arena, or entities or public agencies like a municipality or the City of Danville,” Dexter said. “But by virtue of our formation, the law is clear that any communication or written document received by the city is by virtue a public record, therefore subject to disclosure and knowledge and input by the public at large, unless a certain exception that is clearly defined in the Open Records Act is met.

“In this case, this type of communication would not fall under any kind of accepted category and therefore whatever plan is submitted for that structure will be by its very nature public.”

The property at 311 W. Main St. has been a topic of discussion at Architectural Heritage Board meetings for years. It’s been condemned since 2010.

In April, the AHB drafted a letter to the City of Danville, asking the city to take action concerning the building because the condemnation placed it outside the AHB’s authority.

“There is evidence of mold, cracking of plaster/brick, bowing walls and structural instability on adjacent buildings, which lends to our concern that someday soon, we could potentially lose two or three significant buildings in our historic district, due to water damage from 311 W. Main St., if action is not taken immediately.

At the city commission’s May 8 meeting, Perros told commissioners he had heard from the owners’ attorney, promising to provide the city with a timeline of plans to restore the building. The matter was tabled.

Last Wednesday, Scott told AHB members that the deadline for submission of that timeline had passed without the city receiving anything. That, Scott said, caused him to add the item back to this week’s commission agenda for possible action.

The next regular Danville City Commission meeting is scheduled for 5:30 p.m. June 12.

For the 15th year, the Hope Springs Yard Sale will be held at Centre College to raise money for those... read more