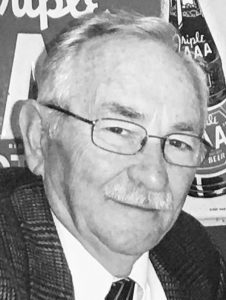 Jerry Wade, 75, died Tuesday, May 23, 2017 at his home. He was born in Junction City, KY on June 19, 1941 to the late Major and Stella Shepperson Wade. Jerry worked in management and was retired from North American Phillips. He attended Indian Hills Christian Church. Jerry was a strong, gentle, loving, and caring man. He couldn’t do enough for other people and loved his family. In addition to his parents, he was predeceased by his first wife, Sue Ann Wade, and a brother, Billy Wade.

The funeral service will be held at 11:00 a.m., Friday, May 26, 2017 at Stith Funeral Home in Danville. Officiated by Rev. Mike Crowe. Pallbearers will be Jerrid Wade, Luke Wade, Micah Wade, Michael Clem, Cameron Clem, and Garrett Clem. Honorary pallbearers will be Barnabas Sunday School Class, and his nephews. Interment will be at Lancaster Cemetery. Vistitation will be Thursday, May 25, 2017 after 5:00 p.m. In lieu of flowers, memorial donations are suggested to Indian Hills Christian Church Building Fund. The online guestbook is available at www.stithfuneralhome.net.