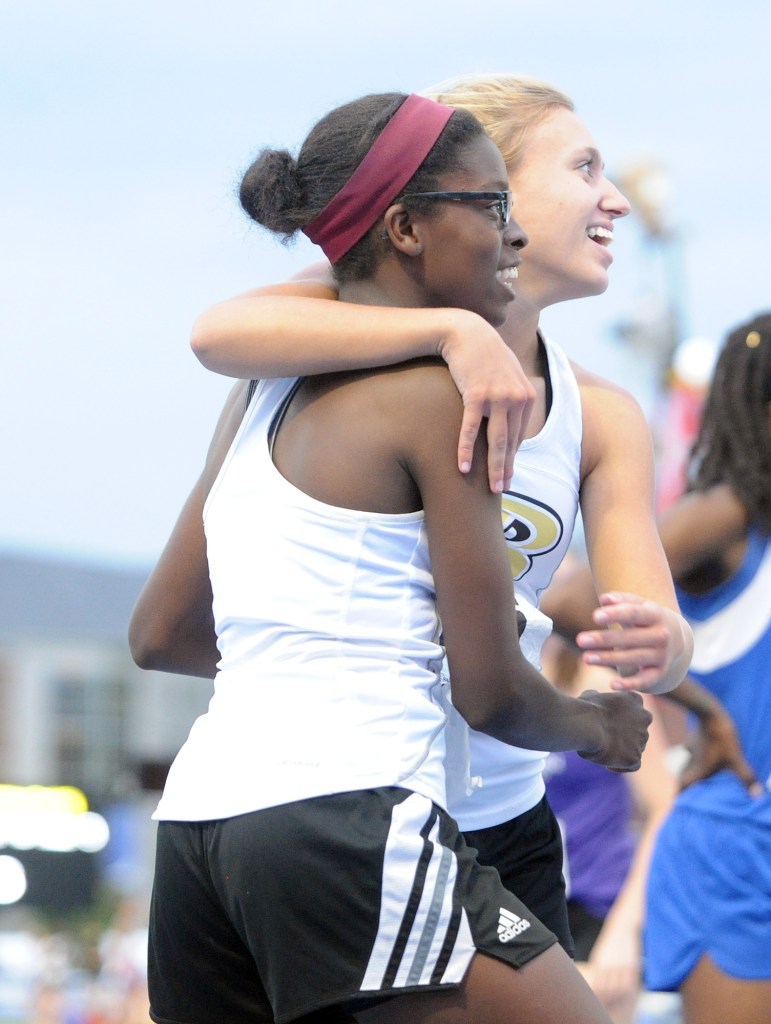 Two of the best track athletes in Boyle County history are graduating.

But just because Kylie Thompson and Emmie Harris have performed in their last high school meet doesn’t mean the Rebels will have a down year.

Thompson and Harris are passing the torch to some talented underclassmen. Freshmen Daneezia Patton and Kaylee Lanigan gave the Rebels a massive boost this season, and they have a bright future ahead.

“I think they can exceed everything we’ve done, honestly,” Thompson said of the underclassmen. “They’re so young and they’re already as good as they are. They have so much potential. I can’t wait to come back and see it.”

“Kylie Thompson has been huge for us,” head coach Brent Wagner said. “She has basically single-handedly turned our sprint program around. She’s taken it to a state-elite level, just for the simple fact that before her, Sarah Hall was the go-to sprinter. Kylie Thompson has broken that record several times now. Not to say anything short of Sarah Hall, her record stood for years and years. But K.T. put us on the map from a sprint standpoint at the state level. She’s done a phenomenal job for us, anchoring our sprint relays. She will definitely go down, right now, as the greatest sprinter that we’ve ever had.”

But Patton took the 200 title away from her this season, winning at state with a 25.46 mark. Thompson placed seventh in the event and immediately went to congratulate her teammate.

“I was just so proud of her. I knew that she was going to win,” Thompson said. “She worked so hard. In 200s in practice, I told her to beat me. And she did, she beat me every time. I knew she’d win because she worked so hard for it.”

Wagner said he and sprint coach Seth Tamme knew Patton would win before they even entered the blocks.

“Before the 200, Seth and I were walking toward the start to get everybody pumped up and motivated,” Wagner said. “He was walking in front of me and turned around and said, ‘Uh-oh, Patton is smiling.’ I could’ve walked away at that point knowing that we were going to be OK. She was just all smiles before the 200.”

Patton is usually all smiles — she’s the “jokester” of the team, Wagner and Thompson agreed. She keeps the mood light.

But before a race, she thinks too much, Thompson said.

“She freaks herself out before races, I’m glad that I can be there with her to tell her to calm down,” Thompson said. “Because she does better when she doesn’t think, she just runs.”

That relationship between Thompson and Patton is a special one. When Thompson went down with an injury after spring break, Patton stepped up.

“The best thing for K.T. was Patton and the best thing for Patton was K.T.,” Wagner said. “It was great last year because we asked Patton to come in and run three relays and one individual event. Last year she was on the 4×2, 4×1, 4×4 and ran an individual. The great thing about that was that she didn’t have to carry us, she wasn’t the one we were riding all our hopes on. She could come in there, have fun, be herself and just go. That was so great, we didn’t put pressure on her from an early age. This year, it was totally different. She did two individual events and two relays. She knew how important she was on those, and in the state meet, she let the state know that she’s the person to beat.”

Thompson said she was thrilled to have a teammate like Patton in practice. Now, Patton will have Elmore to compete with in practice, unless Tamme races Patton against some of the boys on the team.

“I think her and Chelsea will be able to push each other,” Thompson said. “Coach Tamme sometimes just made her run with the guys. If you give her a goal, she’ll meet it. … I think she’s going to go above and beyond anything that I’ve done, and I hope she does.” 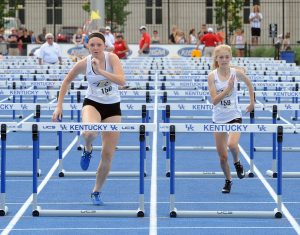 It’s the same for Harris and Lanigan. Harris was an athlete unlike anything before at Boyle: she has 14 medals from region, seven gold, and 12 state medals, four gold.

“In four years, she ran the 4×8, had a brand new event as technical as the 100-meter hurdles, win the state in that event, win the 300-meter hurdles and the 4×4. …  She’s just a phenomenal athlete and a huge competitor,” Wagner said.

Harris even qualified for state in the discus this year, coming within one inch of scoring points. She said she practiced 30 minutes every week on discus.

“It was just a fun thing to do this year,” Harris said. “I just went with it, and I did a lot better than I thought I would.”

That performance alone reminded Wagner that Harris was a special athlete.

“We put her in there just to see if she can get points there,” Wagner said. “She was one inch short from scoring. That shows you what kind of athlete and competitor she is. She was one inch from top eight at state and she only threw discus once a week.”

Competitiveness is something Lanigan brought this season and was a major surprise to the coaching staff, Wagner said. They expected her to be good, but not as good as she was for the Rebels. She’s already got one gold medal at state, in the 4×200 relay, and could have more in the future.

“At the beginning of the season, we knew she was going to be good, just based on what she had done previously,” Wagner said. “But more than anything, in the middle of the season, she kept proving us wrong. Not that we doubted her, we just questioned if she could run three, run four events. Because at the end of the day, she’s probably 56 pounds soaking wet. But I’m telling you, the girl fights. And we found that out in the middle of the year.

“She’s a fighter. And that’s what Emmie Harris is. They fight and compete. Lanigan is quiet, but she loves track and field and loves to win and will absolutely give everything she has. Toward the end of the year, we just stopped saying, ‘We’re not sure if Lanigan can do this.’ She showed us time and time again that she can handle the big competition and the big meet. She doesn’t get rattled.”

Harris said the pair had a competitiveness in practice she loved.

“It was good to be able to work with somebody that was going to push me every day,” Harris said. “It’s hard to practice when she wasn’t there because no one was there to push me. I was practicing with one of the top hurdlers in the state, which made both of us better. She told me after state, ‘I don’t know what I’m going to do at practice next year.’”

Lanigan finished 0.19 seconds behind Harris in the 100 hurdles and was less than a second behind her in the 300 hurdles. Both finished in the top four in each event.

“She’s going to be really, really good,” Harris said. “I’ve told her that and they’ll need her next year, I think they can win another ring next year because she was right behind me in the 300 and the 100 as a freshman. She’s got three more years to get stronger. She’s going to do big things and I think she knows that.”

Amazingly, Harris and Thompson likely won’t be running track next year in college. Harris will be at Utah State playing basketball and Thompson will be playing soccer at Eastern Kentucky.

The pair have been together on the soccer and track teams all four years in high school.

“It’s really bittersweet because we played soccer together since middle school and doing track all four years together was a really awesome experience,” Harris said. “I’m definitely going to miss it and miss soccer.”

Thompson said it’s going to be strange not seeing Harris next to her in the fall.

“It’s going to be weird just not doing a sport with her,” Thompson said. “It seems like everything I’ve done, she’s always there. But I know that she’s going to be successful because she’s the hardest worker I’ve ever met.”

Wagner said Thompson and Harris’ work helped set the tone for the underclassmen and future athletes at Boyle County.

“Emmie Harris and Kylie Thompson are on the Mount Rushmore of Boyle County track and field,” he said.