Quince Arnold talks with admirers about his red 1957 Oldsmobile, which was the top vote getter in the People’s Choice Awards.

The crowd, which included members of the Bluegrass Corvette Club, enjoyed tours of the Lebanon Road distillery, door prizes, music and food from Misfit Commissary of Lexington, Caribbean Spice of Lancaster and Benny Peyton’s Kettlecorn. 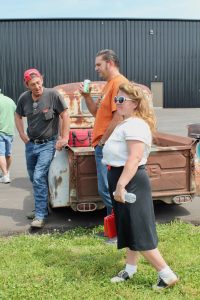 Amy Fleetwood of Hardinsburg was in the spirit by dressing as a bobby socker. She and husband David were celebrating their anniversary while showing off their 1953 Dodge truck and talking with Charles Camden. 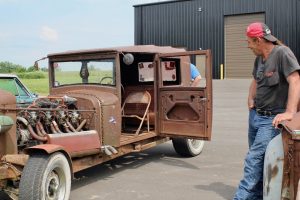 Charles Camden of Danville brought his “mixture” truck with folding seats and a 1932 Essex engine. 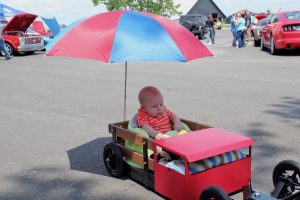 Tilden Richards, 2 months, was the youngest driver. His mom, Jassmine, was pulling his wagon.