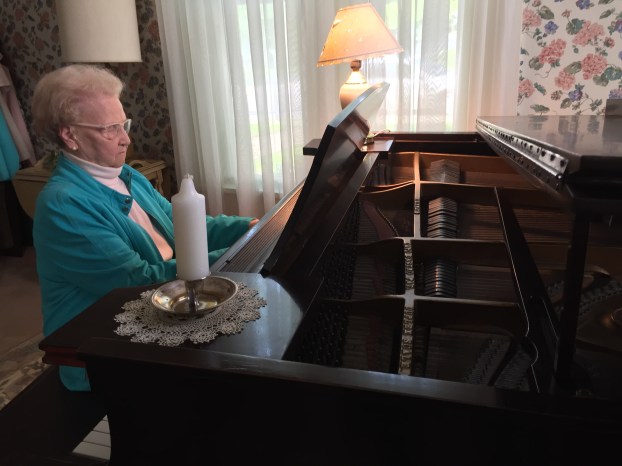 Photo by Casey Craiger Margaret Milburn plays on her piano, which she has used for piano lessons for more than 50 years. The same piano was used by her mother to give piano lessons.

Margaret Milburn was five years old when her mother began teaching her to play the piano. When she was 31, she began teaching piano herself. Now, 79 years since she played her first notes, she’s still going strong.

Milburn has become a widely recognized community member for her skillful piano playing and teaching. She began playing at 5 and learned the talent from her mother, who also taught.

“My mother not only taught piano, but she played the organ at the Christian church for many many years,” Milburn said. “She taught me along with many other children to play the piano in the well-known house on Fifth Street.”

When she got older, Milburn decided to dedicate her life to music and majored in music at Transylvania University. She used the knowledge she obtained to start teaching piano in 1964, when she had become a widow.

“I like all types of music, but at my age I enjoy playing my classical favorites — especially Chopin — and I love songs from the 40s and early 50s, when I was in high school,” Milburn said.

She credits her success in teaching others to her emphasis on practice time.

“I would like to think my pupils would practice from 45 (minutes) to an hour every day — although I don’t think it happens most of the time,” she said. “I do think that to really learn, you must practice every day. If you’re majoring in music in college for instance, I had to practice three hours. But you can’t expect that from a child, as they have to balance multiple activities. I think it is important that everyone practices every day at least 45 minutes to move along fast.”

Slow learning, wrong notes, tedious practice times and frequent mistakes can often discourage young musicians and might lead to them quitting the instrument entirely. It can also be a deterrent for musicians who are thinking about teaching piano lessons.

Milburn recognizes this but adds, “These problems are like schoolwork or anything else — they aren’t as much fun after you’ve done them for a while. For students and teachers, you’ve got to work in different ways for a bigger picture. These problems are all a part of teaching anyone anything. You just work through it and try to get better and better.”

Milburn ensures that every student gets an individualized experience by allowing them to bring their own books with sheet music to play and assigning them special, personal pieces that cater to their talents.

“I try to teach the pupils with the books that they need to learn how to play the piano, but also give them a variety of other materials that will aid them in their interests,” Milburn said.

By providing special sheet music for her students outside of the books all students use, Milburn is able to encourage practice time, spark creativity, and inspire students to play the piano. She hosts recitals in her home to allow students to express their talents.

“The recitals are played on my mother’s steinway piano that has been used for more than three generations in more than one case. It is used for programs because my mother taught on it and then I did,” Milburn said. “Currently I am teaching two pupils that are second generation — children of former pupils.”

The 84-year-old said she will continue teaching until she can no longer. Piano has provided her with a multitude of stories.

“My favorite memories are starting a child out at 6 years old — as I have many — and having them play beautifully when they graduate from high school,” she said. “I hope I will never quit playing piano and I will teach as long as there is a need and I am able. Every year I think might be my last, but it depends on my health. But then again, who knows at my age?”

Milburn’s love for piano has been unwavering and the opportunity to spread it among the community has been noted by many. Her talents have been recognized in The Advocate-Messenger two times previously — once on Dec. 20, 1976, and then again on Nov. 22, 1993.

Her dedication and love for Danville musicians and the surrounding communities is perhaps illustrated by the prices she charges for lessons: Milburn has no set rates.

When asked how much she charges, she responds, “No child should be denied the love of music for an inability to pay.”

Casey Craiger is a Boyle County High School senior who interned at The Advocate-Messenger this spring. She plans to attend Eastern Kentucky University in the fall. 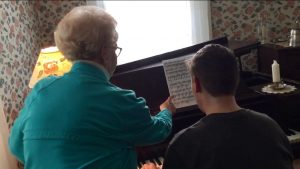