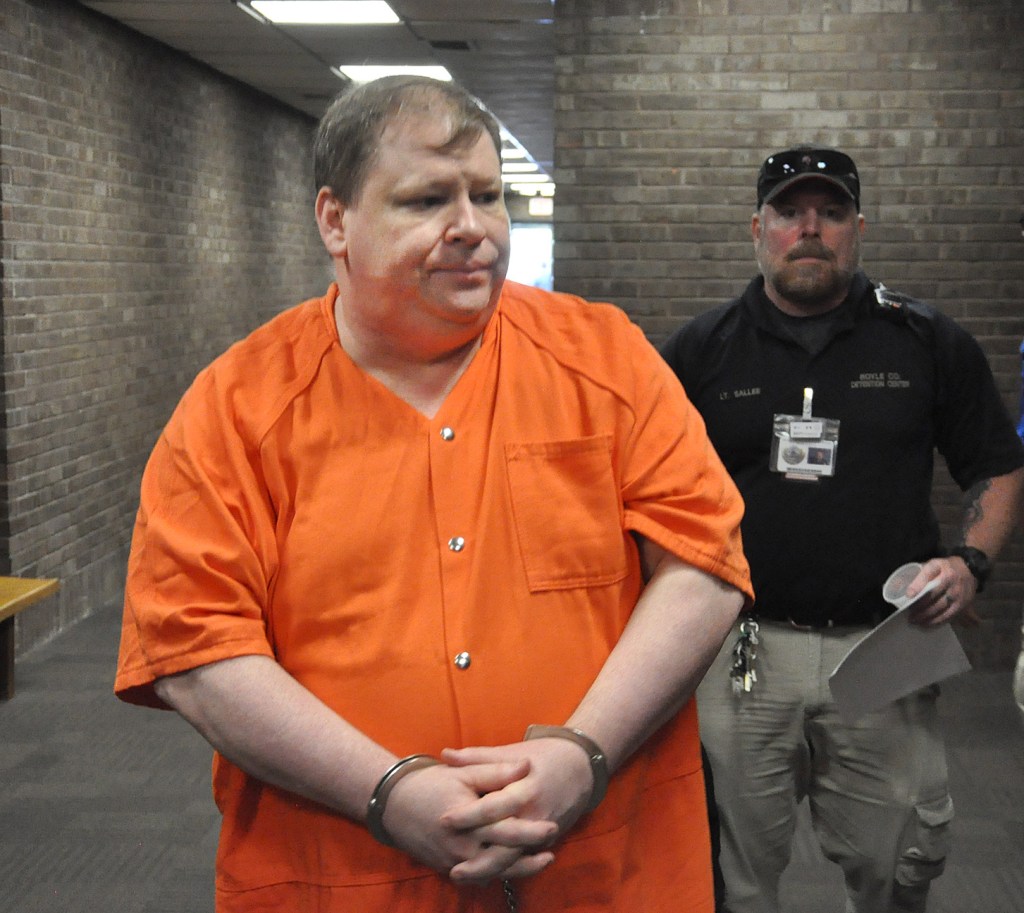 Kenneth Allen Keith is led out of the Boyle County Courthouse Friday, after pleading guilty to murdering three people in 2012. (Photo by Robin Hart/robin.hart@amnews.com)

In a surprise turn Friday morning, Kenneth Allen Keith entered a guilty plea and was sentenced to life without the possibility of parole.

Keith pleaded guilty to first-degree burglary, first-degree robbery and three counts of murder for the shooting deaths of Mike and Angela Hockensmith and Dan Smith in a Danville business in 2013.

Commonwealth’s Attorney Richie Bottoms said he was satisfied with the result.

“Obviously, for the family’s sake, I’m satisfied he’s finally admitted his guilt and agreed to plead guilty,” Bottoms said. “We’re glad the family can finally have some closure. I’m thankful for all the work that law enforcement has done in this case.”

Bottoms said with the possibility of Keith entering a guilty plea came about, they had extensive discussions with the families, because that would mean that the death penalty would not be an option.

“This is not an Alford plea, but a guilty plea,” he said. An Alford plea is reached in cases where there is enough evidence to convict, but the person is not admitting guilt.

He was scheduled for a trial on Aug. 10.

According to records in the Boyle County Circuit Clerks office, the Danville Police Department was holding $101,948 in cash in evidence; $65,000 of it was released to the family of Smith for restitution, while the remainder of the money was released to Keith’s wife. The money returned to Smith was money that was stolen from him during the shooting and robbery.

Two wrongful death suits from the families of Mike and Angela Hockensmith had been filed against Keith; those were to be held in abeyance until the criminal case was resolved. No information was available immediately Friday as to when those will be returned to the docket.

Keith has already been removed from the Boyle County Detention Center, according to online records.

Police were dispatched to the ABC Gold, Games and More business, owned by Mike and Angela Hockensmith, after their children, who were in the store and unharmed, called 911 on Sept. 20, 2013.

Keith, who formerly owned a pawn shop there and employed the Hockensmiths, was first arrested on Oct. 9, 2013, and has been held in the Boyle County Detention Center since that date, awaiting trial without bond. The progression of his case has been rife with delays.

In June 2014, his attorney, Mark Stanziano, was shot and killed outside his Somerset office. His wife, Bethany Stanziano, took over the case, but eventually withdrew as Keith’s representation in June 2015. Sandra E. Downs, of the State Department for Public Advocacy, took over the case before it was assigned to Samuel Cox and Teresa Whitaker — two public defenders from Lexington with experience handing capital punishment cases. Cox and Whitaker were present in court on Friday morning.Suppression motions were also filed in the case — first to suppress the testimony of Tracy Herald, a Michigan pastor and friend of Keith who alerted the Danville Police Department to Keith’s potential involvement; and most recently to suppress the evidence that was found due to search warrants obtained largely on Herald’s testimony.

There was also a request for a change of venue, which was ultimately denied after a hearing was held on the matter.

Bottoms said he had spoken with the family of Dan Smith today explaining greater details of the case and plans to do so with the Hockensmiths’ families next week.