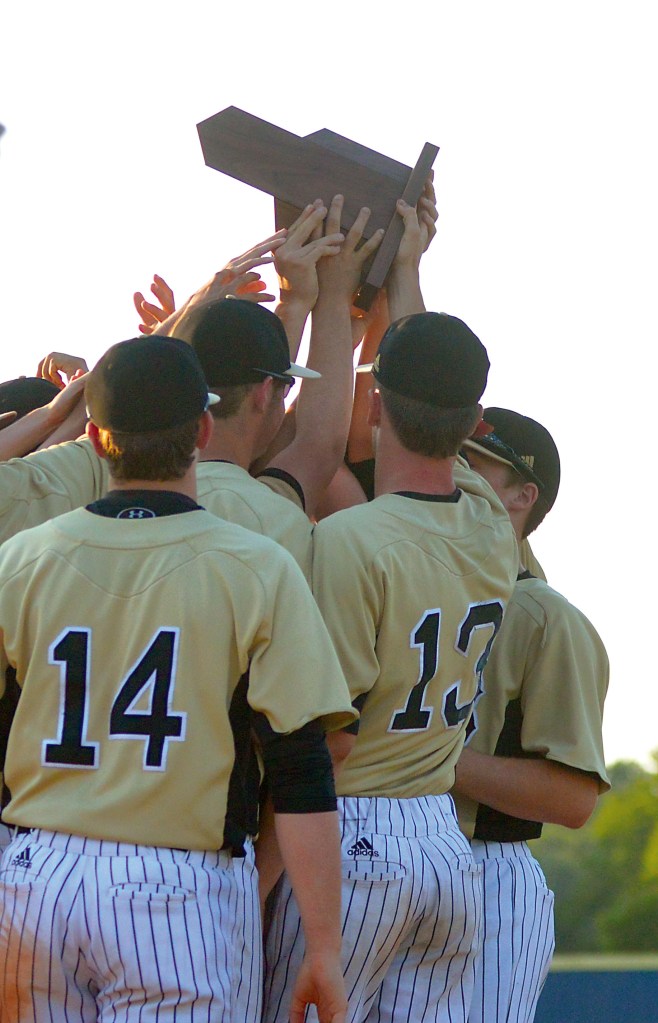 Boyle County had counted on freshman Karson Thompson to throw plenty of innings this year, but arm soreness earlier this season put those goals on hold.

The freshman right hander came on in the third inning of Friday’s 45th District championship game and shut down Lincoln County, helping the Rebels to their second straight championship with a 7-6 win at Danville.

Thompson allowed two hits and one walk in five innings, holding the Patriots scoreless while striking out three.

“The last couple of weeks he’s been feeling good,” Wynn said of Thompson. “… For a freshman in a district championship game to do that and keep us in it was awesome.

“We’ve got full confidence in him to do that, but you never know. It’s a big stage, anything can happen. He handled it great.”

Before that, the Patriots (13-19) were on fire at the plate, lighting up Rebels starter Tristen Helton for six runs on eight hits in the first two innings.

Noah Horton got the scoring started in the top of the first with an RBI triple off the right field wall. Lincoln scored five in the second — Luke Smith hit a grand slam and Horton added another RBI on a single.

“We hit it, but you’ve got to add on through the game. A baseball score can change at any moment. One swing and it can turn around, and that’s what happened tonight.”

Despite all those runs, though, the Pats lead 6-3 through two. Ty Dragan hit a two-run homer and Hunter Mason followed with a solo shot in the first to put Boyle up 3-1.

And it was another long ball that provided the winning boost for Boyle as Helton slammed a two-run shot in the fifth for the final margin.

The Rebels (24-11) got closer in the second and third innings. Thompson hit an RBI double in the second, and Drew Baker added a RBI single in the next frame.

Wynn said the Rebels had struggled at the plate over the final week of the regular season, but all that changed during batting practice last Saturday. They scored 18 runs on 20 hits during the district tournament.

“We just started clicking,” Wynn said. “Monday’s game, we barreled the ball up well. Then again tonight, we’re not trying to hit home runs, but we’re hitting hard-hit balls and that turns into stuff like that.”

Boyle became the first team since the 2012 Danville team to win back-to-back district tournament titles, and the Rebels will ride that wave into next week’s 12th Region tournament, which starts Monday at Rockcastle County.

“Our goal is to win region, but it’s nice to have that confidence going in, knowing we took care of business in the 45th,” Wynn said. “It was something that hadn’t been done in a while, so that’s always a little more incentive, so I think the guys wanted it.”

And while Ellis admitted Friday’s loss stung, he reminded his players afterwards that there’s still more baseball to play. Matchups will be announced after the draw this morning in Mount Vernon.

“This sucks, no one wants runner-up, but we’re still playing,” Ellis said. “We’ve got a shot at the region. Holding the region championship trophy would be a whole lot better than the district championship trophy. That’s what I told them, ‘Don’t get discouraged, hold your heads up and we’ll have a shot at region.’”