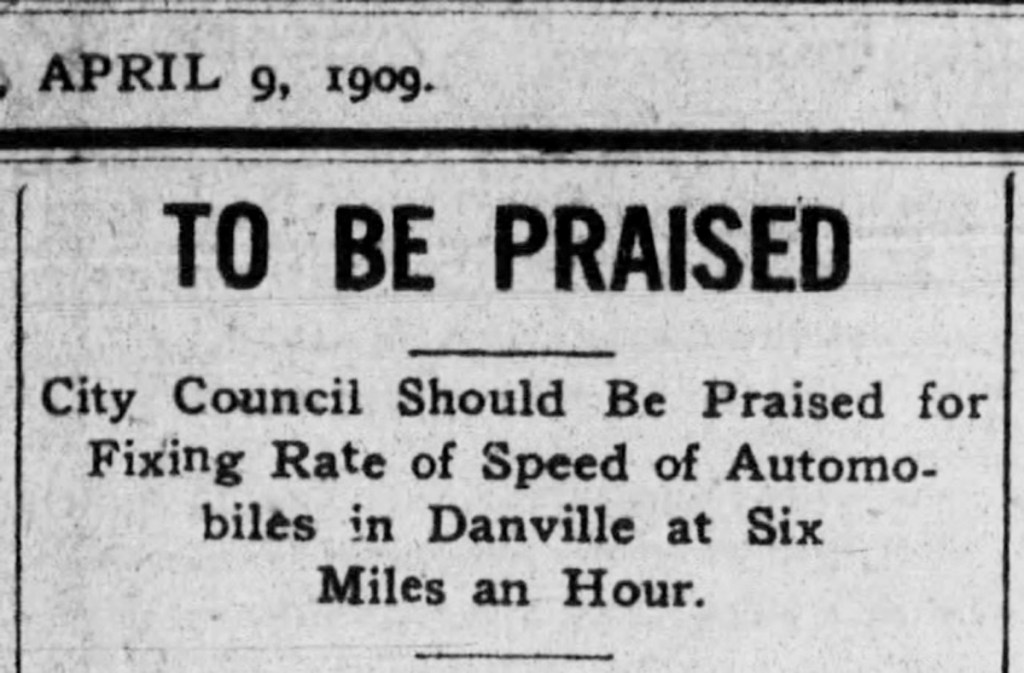 The rush to build a horseless vehicle in Danville came in July 1900 after Col. William F. Cody, familiarly known as “Buffalo Bill” prophesied that “we shall have a horse famine in this country next year.”

He advised farmers and ranchmen to go into the business of raising good horses, as the demand for them will be greater and the prices better than for many years.

Cody’s opinion is that all the talk about bicycles and automobiles driving the horse out of business is nonsense.

An article in the Danville News first mentioned a “horseless vehicle” in the local newspaper was in the fall of 1900.

“Col. Dobbs, whose popcorn is making him a reputation on both sides of the Atlantic and even in China, is to be the owner of a new vehicle, which is now being built at Charley Woford’s shop,” according to an announcement in the Danville News.

The vehicle was for winter use and resembled a cross between a street car and a milk wagon. It will be propelled by the occupant by means of pedals and cogs beneath.

‘’Watch out for it, for it will beat the Democratic band wagon all hollow.” Dobb’s popcorn is doing a wonderful work in these troublous times.

“To see two bitter political enemies eating from the same bag of Dobbs’ corn is as much a sign of reconciliation and brotherly love as the breaking of bread with the wild and untamed child of the desserts of the Orient.”

The editor of the Danville News got to take a ride in an automobile nine months later.

F.V. Mckenzie and Clarence Williams of Louisville, who are making a number of Kentucky towns in an automobile, representing the Remington Typewriter and Kentucky Automobile Co. of Louisville,

were kind enough to come around and take the local editor out for a ride throughly enjoyed and appreciated.

The writer was “carried away” with the vehicle and is ready to go again at a moment’s notice.

When the men arrived in the city Friday night with their automobile, the colored porter at Gilcher Hotel was overjoyed at the prospect, and as soon as the machine was unloaded he wanted to ride to Fox & Logan’s stable, where the machine was put up.

The motorman told him to climb in, and he was up before the command had hardly been given. The motorman started off and was nearing the stable when he suddenly reversed the machine and the flying leap executed by his passenger, who thought the machine out of order, brakes all records.

In July 1902, Thomas B. Dewhurst of Danville built a new machine which he began work on in the fall and hopes to have it ready for use before spring.

He built a machine some months ago which he called the “Dewabout.”

The chief objection to this horseless vehicle was the noise it made. In a new machine, the problem was corrected and patterned differently to be a six-horse power instead of two.

Several horseless carriages have been driven to Danville from other places.

There were two horseless carriages in Danville July 19, 1904, one an automobile and the other a vehicle drawn by two goats, and both of them attracted a great deal of attention from the Court Day visitors.

Dolph Rice owned the first automobile in Danville. It was bought in July 1904, according to the Danville News.

It is double-seated machine and Rice has learned to run it with ease.

A Mr. Hubbard had the only auto in Junction City until Friday, July 1902 when he crashed it.

He is crippled and was compelled to rely on locomotion on a car made especially for his use, which was propelled by means of a set of leavers worked by hand.

About 10 a.m. Friday he had the carriage attached to an express wagon with a rope, and was near a crossing at Shelby City when a local freight came along. The wagon had got across safely, but the automobile was left on the other side of the track, still attached, however, by the rope of the express wagon.

Before the rope could be thrown off, the train struck it and jerked the auto beneath the wheels of the freight engine, where it was quickly pulverized.

Hubbard was thrown on the switch beside the main tack and barely saved himself from rolling under the swiftly moving wheels.

He was badly bruised about the head and sustained other serious injuries, but will recover, according to the Danville News.

The Philadelphia North American was a little skeptical of the first automobiles.

“Well, the automobile is certainly the vehicle for the beginning of the 20th Century, but I wonder what we will be riding in toward its close?”

“A hearse probably,” the article stated.

An advertisement in 1909 shows the speed limit in Danville for automobiles was set at 6 miles per hour. 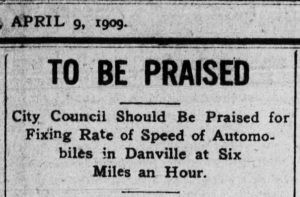