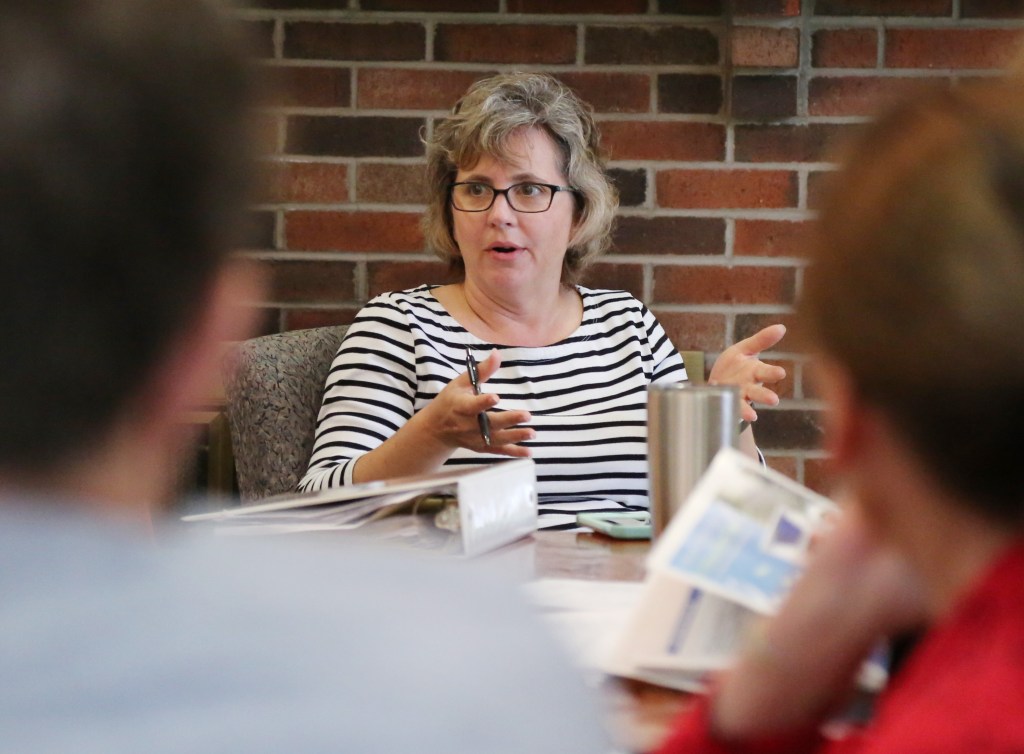 Ben Kleppinger/ben.kleppinger@amnews.com Valery McMann, chair of the Heart of Danville, talks about issues between the City of Danville and the Heart concerning the need to have a qualified preservationist available to meet the city’s “Certified Local Government” requirements.

The Heart of Danville plans to organize a “summit” with Danville commissioners and state preservation officials to resolve apparent disagreements over the proposed hiring of a city preservationist.

Heart board members said Thursday they don’t think their organization has been fairly characterized by city commissioners in recent weeks.

Danville’s proposed 2017-18 budget includes up to $80,000 to pay for a historic preservationist position or contract for preservationist services. It’s a requirement to have preservation services if the city wants to maintain its “Certified Local Government” status.

But city commissioners have been critical of the new line item, questioning why it’s being added to the city’s growing list of expenses when the Heart of Danville has provided the required preservation services in past years.

Former Heart Director Bethany Rogers held a degree that qualified her as a preservationist professional, but newly hired Director Nick Wade and Marketing Manager John Wyatt do not. City commissioners have indicated they think the Heart should have hired someone with preservationist qualifications so the city wouldn’t need to.

Heart board members said they think commissioners may be missing some of the facts about the situation.

Board Chair Valery McMann said while Rogers technically helped the city meet its preservationist requirement, “I think she mostly acted in name, because to my knowledge, she wasn’t called upon very much for that.”

“Our Heart of Danville program — we have a lot to do besides just focus on preservation,” McMann said. “I feel like our main job is to get people downtown so that those buildings can be preserved, because people want to come down here and want to invest in downtown Danville.”

McMann said when the Heart began it’s search for a new director, the fact that the new director would no longer be the city preservationist “was part of the deal.”

“(Kentucky Main Street Program Coordinator) Kitty Dougoud had already told us — ‘you really shouldn’t have your Main Street director be the preservationist person; that’s a conflict,’” McMann said. “And so we went into it knowing — and we told (City Manager) Ron (Scott), ‘we may or may not be able to hire somebody who has this qualification that you want, because we want somebody that’s going to be the best person for the whole job.”

“I think that Ron understands it, but I think that there’s a lot of pressure from the mayor and city commissioners who don’t understand,” Wade said. “Because I don’t know if any of them have been involved in these conversations with Kitty, as they’ve had these conversations about the role of the CLG and the Main Street program, and how we’re all family but we do different things and the oversight of the areas.”

The CLG status is given to cities that prove they are following best practices for historic preservation. It also makes cities eligible for some preservation grant funding.

McMann said in the years before Rogers was director, the city kept its CLG status without a preservationist because “they weren’t as strict about it at that point.”

McMann noted that the Kentucky Heritage Council has provided the city with a letter detailing everything that needs to be done to maintain the CLG status.

That letter, from CLG Program and Planning Coordinator Vicki Birenberg, states that while Danville previously met its preservationist requirement through the Heart of Danville, “this is not the ideal way to meet your CLG responsibility.”

“We are pleased to learn that you are proposing funding for professional historic preservation staff in your budgeting process, and we hope the community will support your efforts.”

Board member Megan Noltemeyer said it seems the situation has been depicted as “the Heart of Danville chose to go against the city and now there could be some financial implications.”

“I’m not sure that’s the truth,” she said. “So if we could kibosh that, bring everybody together and have that conversation and kind of reinvigorate that partnership a little bit, I think that would be better served.”

Noltemeyer may have been referring to when, at a recent Danville City Commission meeting, Mayor Mike Perros suggested that if the city hires a preservationist or contracts for the services, “maybe that needs to be largely funded with the dollars we would have committed to the EDP, which goes to the Heart of Danville.”

Wade said funding from the city that helps fund the Heart is still in the budget for the coming fiscal year.

“My opinion is there will be no implications for this coming year, financially from the city. I think it’s a future year — fiscal year 18-19 and on — that we might see some implications.”

Board member Mary Robin Spoonamore said she believes there’s preservation work that the city cannot currently accomplish because of the current setup.

That would include building better relationships with downtown businesses, so that design guidelines and the value of preservation could be better understood, she said.

According to the city, among the job duties of the proposed preservationist would be helping businesses understand and implement preservation practices; and providing findings of fact to the city’s Architectural Heritage Board (AHB) so the board’s decisions will have the appropriate weight of law.

Heart board members said they hope a meeting with Danville commissioners, along with state Main Street coordinator Dougoud and CLG program coordinator Birenberg would help get “everyone on the same page.”