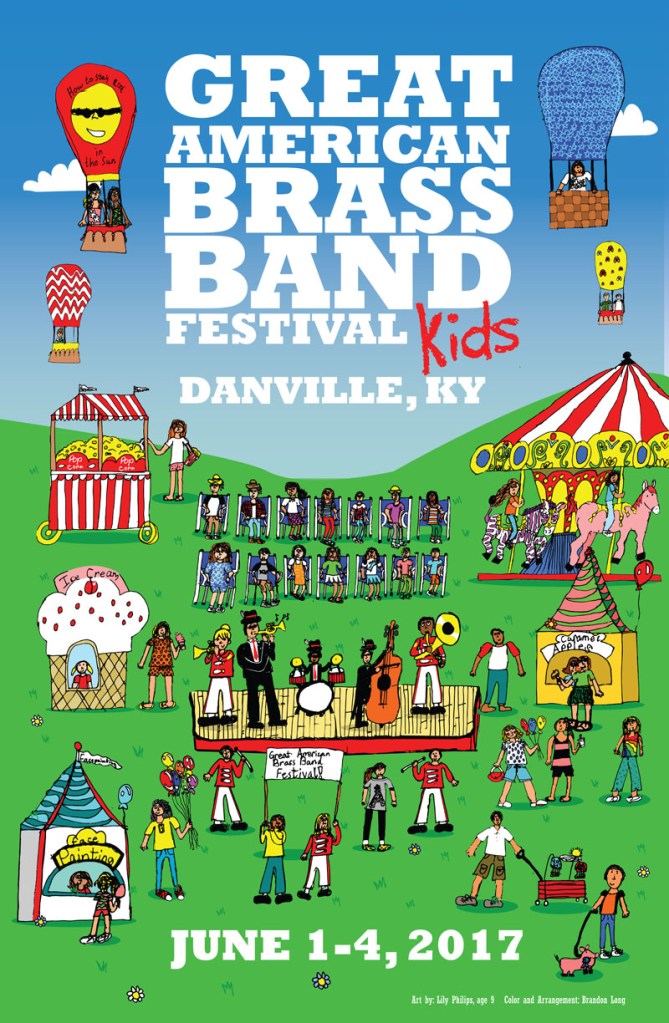 This is the first year for a young artist to create a poster for the Great American Brass Band Festival.

Long worked with Lily Phillips — who was 9 at the time of the drawing —  on her design. He says she approached the GABBF offices with an amazing drawing of how she pictured the festival.

“It really gave a great insight into how kids see and process the excitement that surrounds the event,” he says. Lily’s drawing, Long says, had so much detail and so much imagination.

“She included all of the elements that make the festival great — the band on stage, the hot air balloons in the air, the food vendors. But she didn’t stop there —- she added a carousel, a bouncy-house and a prize-winning pig.  Some of these things aren’t even a part of the festival, but I loved that she added them because that is how she sees the event.”

Lily’s drawings were brought in, all taped together to make one. Long scanned them into a computer, added color and did some rearranging and a few edits (he says “Sorry, bouncy-house, that you couldn’t fit …) so they could turn it into a poster, with room for the title, date and other details.

Long says Lily’s poster inspired his own creation, which has become the 2017 commemorative poster.

“I used her concept of juxtaposing all of the details of the festival into a big montage of the entire event,” he says, adding that tackling the “big picture” of all of the festival events has always been a challenge in creating marketing materials. “It took Lily’s drawing to help me realize that a big cartoon explosion of activity was the best way to go about it. It’s always great to get a creative boost from young artists.” 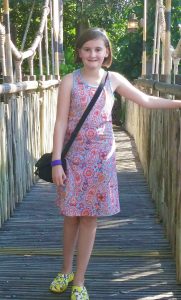 Photo contributed
Lily Phillips, now 10, brought a drawing into the Great American Brass Band Festival offices, expressing her vision of the festival, when she was 9. That drawing has been turned into the first ever commemorative kids poster. Lily is the daughter of Bill and Kimberly Phillips of Danville. 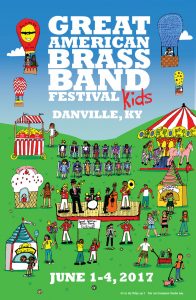