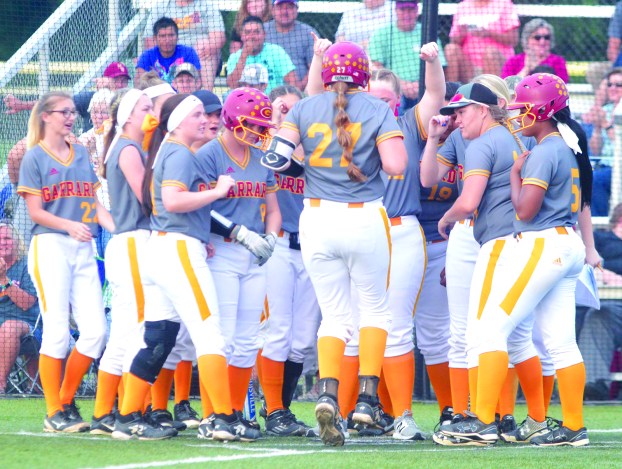 The Golden Lions had no such problems in Monday’s 12th Region tournament opener against Mercer County at Boyle County, beating the Titans 20-1 in five innings while ringing up 20 hits.

Montgomery said he was surprised by the lopsided outcome, expecting a tough matchup with the 46th District champion Titans.

“We wanted to prove something tonight, hitting-wise,” Montgomery said. “… Maybe just feel a little bit better about ourselves.”

The win sets up a semifinal matchup with Rockcastle County today at 8 p.m. The Rockets won the regular season matchup 7-2 in the first week of April.

The Lions held a 4-0 lead after the three innings, but nine runs in the fourth and seven more in the fifth quickly took the game from competitive to mere details.

“They hit everything we threw at them,” Mercer coach Robbie Tharp said. “We threw really everything we had at them to throw and they hit it. And we didn’t. That’s the tell tale sign.

“We’re young in some key positions and whenever some adversity shows up, they have a hard time fighting through it and getting over it.”

Day, Adams, Montgomery and Logan dominated in the first four spots of the lineup, combining to go 9-for-15 (.600) with seven runs and 15 RBI.

“Hitting puts pressure on the defense, and we weren’t ready for that,” Tharp said.

The Titans couldn’t get anything going at the plate, totaling four hits. Lindsay Shope went 2-for-2 with a run.

“They just outperformed us,” Tharp said. “It wasn’t like we were tight. They just weren’t up to it today.

“It mounted and mounted and mounted, and the next thing you know it’s 13-0. When it was 4-0 starting off that inning, we were fine in that situation, knowing that if we got a few key hits late in the game we could be right in it.”

Tharp said the fourth and fifth innings snowballed on his team. While the Lions were plating player after player, coach Montgomery held fast with his usual batting lineup rather than substitute a pinch hitter for some of the bigger bats.

“It starts building,” Montgomery said. “You get two or three on, you hit a triple and score three, then a two-run home run. It’s the fourth inning, it’s still early. If you burn your substitutions up, which I’ve done early, I had to be careful what I did. I didn’t want to be caught in a tough spot.”

The season came to an end for an historic Mercer team, winners of the program’s first district title since 2012 and its first ever undefeated run through the district schedule.

While it was hard in the moments immediately following Monday’s game, Tharp said he and the team will be able to focus on the accomplishments of the season and not one game.

“We’re going to keep reiterating those facts,” Tharp said. “This season was a success — 21-12 on the year, 46th District regular season champions, 46th District tournament champions — and we’re just going to make sure they don’t dwell on this moment. This is an awful, awful moment. I can’t remember in my coaching career having that kind of an outing in this kind of setting.

“We’re going to use that as stepping stones for our young group and use the successes that we had this year and build on that.”

The trail goes on for Garrard, which is seeking its first region tournament title since 2009. As for today’s opponent, Montgomery wasn’t sure what to expect from Rockcastle immediately following Monday’s win.

“We’ll figure it out, like I said, one day at a time now,” Montgomery said. “I expect two really good games tomorrow. In my opinion, it’s the four best teams in the 12th Region.”