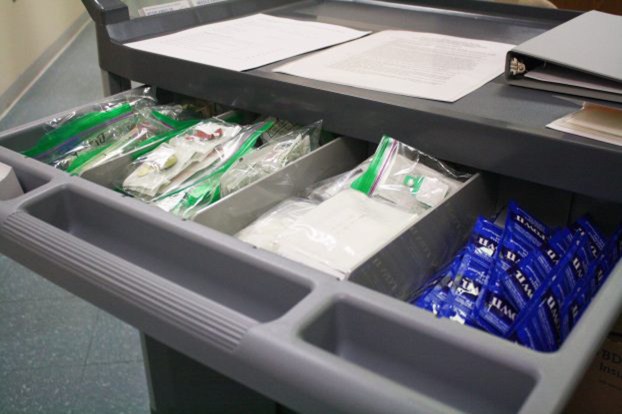 File photo The Boyle County Health Department stores their supplies for the needle exhange program on this cart and the cart transports between rooms during the program.

Blevins says from the beginning, the health department has been focused on making this program work for the people who need it. This focus has brought about a change in the program’s schedule — which will be 4:30-6:30 p.m. on Tuesdays, beginning June 6.

“We started asking clients what would be better for the program. A lot of people work; we have discovered that they have jobs. It’s easier to be off later in the day on a Tuesday,” Blevins says.

Three to five people visit the early afternoon Friday clinics, on average, and he said at least one new person a week stops in.

“Word’s getting around,” Blevins said.

The most important aspect, he said, is that it gives medical personnel the face-to-face time with those using drugs.

“We get that four to five minutes to sit down, face-to-face with someone. They more they trust us, the more we get to learn about their story. It takes a while for clients to trust us, that we’re not going to turn them in to somebody. They’re getting comfortable with us,” he said.

Blevins said he was glad that the program was off the ground in Boyle County and he was happy to see more of the surrounding counties picking up the idea, too.

“The more counties that participate, the better off we all are,” he said.

On the first visit, someone can receive up to 30 needles without bringing any to exchange. After that, it becomes a one-to-one exchange.

“If they bring 14, they get 14; they bring 20, then it’s 20. That’s written into the state funding through ASAP,” Blevins said, referring to the Agency for Substance Abuse Policy.

Typically, he said, people bring 20-30 needles a visit, and heroin has been the number one drug being reported so far. However, a few individuals are reporting methamphetamine use.

The goal, Blevins said, is to cut down on the dirty needles and the transmission of Hepatitis C and HIV.

“That’s our goal … It’s scary stuff. We want to prevent that disease and get those needles off the street,” he said. “We educate and encourage them, find treatment, whatever we can do.”

The Boyle County Syringe Exchange Program will not be open at all this week and will reopen on June 6.

The Boyle County Syringe Exchange Program will reopen June 6 and will be open 4:30-6:30 p.m. every Tuesday at the Boyle County Health Department, 448 S. Third St., Danville.

With nervous anticipation, eighth-grader Madison Terrell stepped in a room before a panel to began sharing about herself, her family,... read more