Sts. Peter and Paul gets approval for elevator, expects to receive tax credits 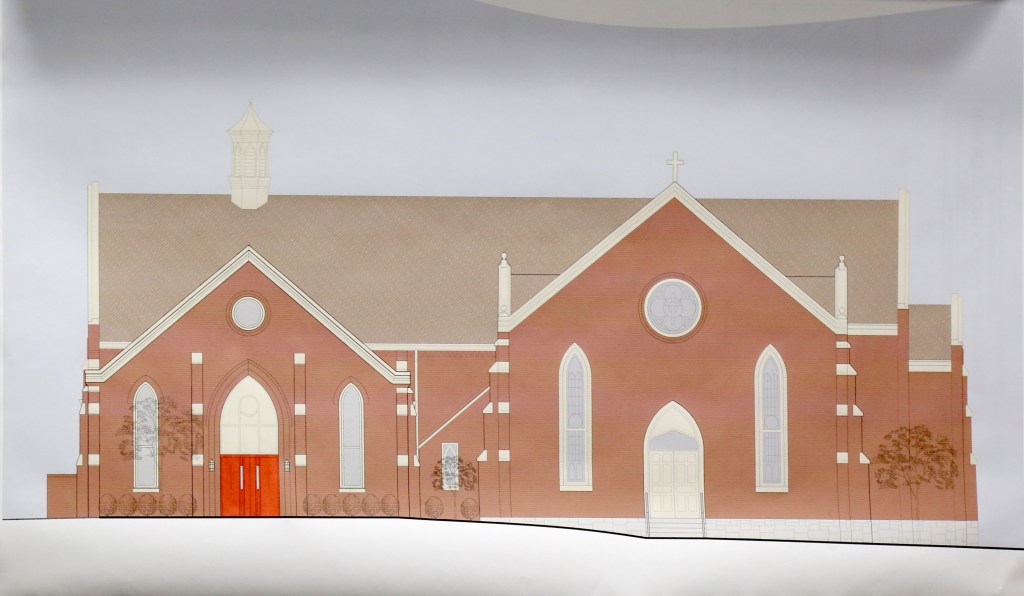 Ben Kleppinger/ben.kleppinger@amnews.com A rendering shows what the front of Sts. Peter and Paul Catholic Church in Danville’s downtown historic overlay district is expected to look like when construction of a new 1,100-square-foot addition is completed.

Sts. Peter and Paul Catholic Church has received approval from the Danville Architectural Heritage Board for a project that will allow it to construct an 1,100-square-foot addition on the front of its original building to house an elevator and stairwell.

The project was first approved in January, but has since been revised to remove a plan for a new steeple tower.

Josh Ives, the architect for the church’s project, told AHB members Friday that removing the tower kept the project within what the church could afford — and qualified the church for state historic preservation tax credits.

“With the original building being 1866 and the main large addition was in 1988, any work that we are doing to the 1866 building portion of it, we’re allowed to go after state tax credits,” Ives told AHB members.

Questioned about tax credits for a church, which is tax-exempt, Ives explained that “what happens is you can actually sell those tax credits to a bank or financial institution.”

“You’re able to sell them those tax credits,” he said. “They can actually use those toward how they allocate their finances and taxes for the year. Typically, they’ll give you a range of 70 cents to 80 cents on the dollar for those.”

Ives said the church qualified for additional tax credits because the work being done on the interior was meeting requirements of the Americans with Disabilities Act.

The church could qualify for tax credits worth about 10 percent of the project cost, which could be awarded in about two years, once the project is complete and the church has provided documentation that guidelines were followed for historic preservation, he said.

The church consulted with officials from the Kentucky Heritage Council, who “were not approving of the tower element,” but did approve of the addition on the front of the original building for a stairwell and elevator, Ives said.

“They want the historic element to really be the forefront and not be secondary and they felt this tower was visually dominating the main feature,” Ives said. “… For us to be eligible, they recommended us taking this rest of the tower and the steeple portion off, making that more of a gable, to really be secondary and more submissive to the original.”

At the beginning of the meeting, two members of the AHB disclosed personal ties to Sts. Peter and Paul.

“Let the record reflect that I’m a member of Sts. Peter and Paul Catholic Church and that I’m not going to have any financial gain in any way, shape or form by voting for or against this,” John W.D. Bowling said. “I do get spiritual plusses out of that particular building.”

“I also need to disclose that our family is a member of Sts. Peter and Paul Church and I will receive no financial gain from this deliberation,” Julie Wagner said.

In order to authorize the revised project, AHB members had to approve findings of fact, compiled by Wagner, and then vote to accept the proposal.

AHB member Mary Girard motioned to approved the findings of fact. Bowling attempted to second the motion, but AHB Chair Tom Tye interjected: “Let me second, that takes any —“

“I’m not concerned about any controversy,” Bowling said. “If people want to shoot at me, that’s fine.”

The findings of fact and the acceptance of the proposal were both approved unanimously. 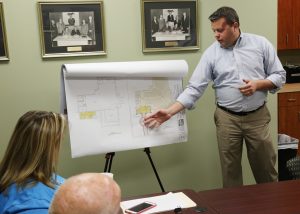 Ben Kleppinger/ben.kleppinger@amnews.com
Architect Josh Ives explains revised plans for an 1,100-square-foot addition to Sts. Peter and Paul Catholic Church to members of the Danville Architectural Heritage Board Friday morning. The church is planning to qualify for historic preservation tax credits for the project.