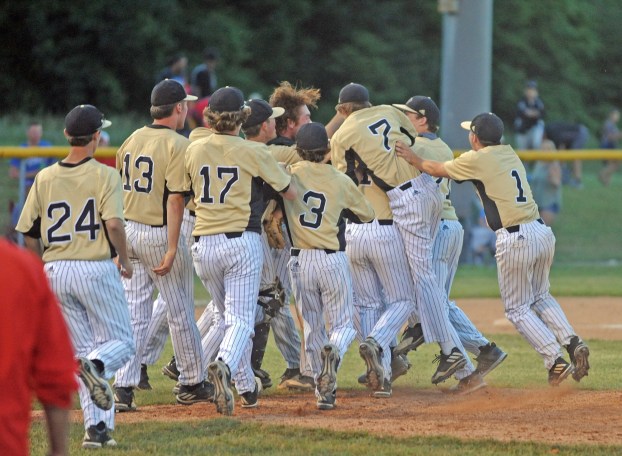 Boyle County baseball back to state after 11 year absence

MT. VERNON — For the past 11 seasons, the only trips Boyle County has made to the state baseball tournament have been as spectators.

That won’t be the case this year.

In Wednesday’s 12th Region Tournament championship game, tourney MVP Ty Dragan cranked out two three-run home runs and Hunter Mason knocked out a solo home run to give the Rebels all the cushion they needed to defeat Lincoln County 10-3 and punch their ticket to next week’s KHSAA State Baseball Tournament.

“We hadn’t been here in nine and hadn’t won in 12 so it’s very special,” Boyle coach Kyle Wynn said of the Rebels’ first region title win since 2005. “I’m so proud of these guys. Day in and day out they believed and kept fighting. We had a couple spots in the season where I think they doubted themselves a little bit, and they got back to where they are. So hats off to our coaches, our program, our parents, and the whole Boyle County community. We’re happy to bring it home.”

Boyle (27-11) never trailed in the ballgame, scoring all the runs it needed for the win in a six-run second inning. The Rebels went scoreless over the next three innings before capping their regional title run with a four-run sixth.

For Lincoln coach Tee Ellis, whose team had scored two upsets to reach the region’s championship game, Wednesday’s loss was a heartbreaker.

“We worked hard. This is where we wanted to be to have a chance. The ball game just didn’t go our way tonight,” he said. “We can look back that there were a few opportunities to score, but a few balls didn’t fall for us. That’s how it worked out.”

Drew Baker connected for a two-out double to get the Rebels started in their six-run second inning at-bat. Tevin Leigh followed Baker on base with a walk, then moved around to third when Cameron Walker tagged an RBI-double to plate Baker. Leigh later scored on a Lincoln error. Karson Thompson took first on the error and Walker moved over to third to set Dragan up for his first three-run home run. The junior shortstop sent Sawyer Carrier’s pitch over the left field fence to put the Rebels up 5–0.

That would not be the only Boyle long ball in the inning, with Hunter Mason following up Dragan’s homer with a solo shot of his own, also to left field, to extend the lead to 6-0.

“In this situation at the end, we try to play loose because we haven’t been here in a while,” Wynn said. “The easiest thing to do is kind of get down on yourself and doubt yourself so when you can score early and play loose a little bit that helps a lot. Luckily we got out to that big lead and scored those six runs.”

Lincoln (15-20) cut the Boyle deficit in half in the top of the fifth inning, getting three runners across home plate. Hunter Jeffries led off the at-bat with a bunt he turned into a double. He then moved to second on a wild pitch before scoring on a Garrett Clem single. Luke Smith, who was walked four times in the game, joined Clem on base with his first walk and both runners scored on wild pitches by Boyle starter Tristan Helton.

The Patriots left two runners on base in the fifth, with Drew Baker, who came on to replace Helton with two outs, getting the final out. The third-strike call on Noah Horton was questioned by Ellis, with the Lincoln coach saying it was a foul tip and not a third strike, but the out stood.

Lincoln missed a big opportunity in the top of the sixth inning by leaving three runners on base. Baker loaded up the bases with walks on Parker Monhollen, Jeffries and Smith and only one out. But Baker got out of the jam by getting a strikeout on Cooper Brown and getting Horton to ground out.

Boyle allowed Lincoln no closer than three runs, coming out in the bottom of the sixth and adding four more runs.

Walker led off with a walk and Thompson reached on a bunt before Dragan knocked out his second three-run homer to left field. Helton, who singled to reach, tacked on another run off a wild pitch for the final.

Wynn commended Dragan for his two three-run homers, but he didn’t consider that his finest feat of the tourney.

“He did a nice job tonight,” Wynn said. “The biggest thing everyone knows is his offense. They know how good he is on offense. But he doesn’t pitch a lot for us and he came in in a tight spot last night (9-3 win over Rockcastle) and shut the door. He doesn’t do that. I was more impressed with what he did on the mound last night.”

Ellis said the four runs in the sixth took the wind out of Lincoln’s sails.

“It was deflating,” he said. “Those were tough. Any deficit is tough to overcome, but when you get runs added on you late in the game it makes it a little harder. And, you know, momentum swings back and forth and it seems like it swung back in their favor with the late runs.”

As Wynn watched his Rebels celebrate their victory, he commended Lincoln for their season and a strong tourney run.

With the 12th Region championship trophy in hand, the Rebels now have to prepare for next week’s state tournament at Whitaker Ball Park in Lexington.

“We’re excited,” Wynn said. “We’ve got a week to kind of regroup and get refocusd. I’m going to tell these guys here as soon as I get out there that we’re not done. They did something special here tonight but let’s see if we can do something special down there in Lexington.”

Brian Deem made a deal with his players — win the 12th Region softball tournament and they can pierce his... read more