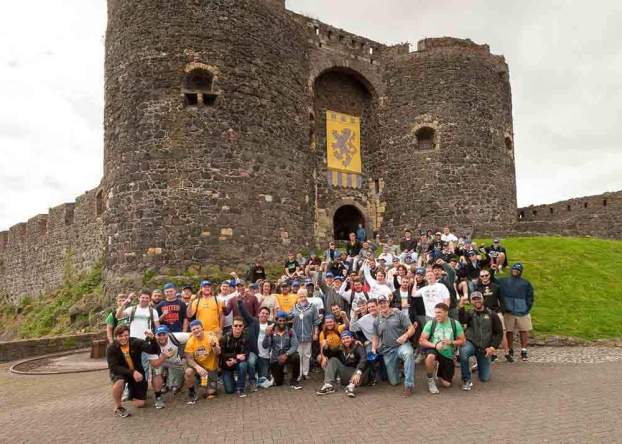 Centre College football players and their parents pose for a group photo in front of the 1170 Carrickfergus Castle. (Photo by Liam Halferty)

A coach and an athlete with the Centre College Football Team are said to be recovering after falling from a cliff while hiking Wednesday along the Cliffs of Moher in County Clare, Ireland.

Centre College President John Roush sent an email to students, faculty and staff on Thursday, confirming their connection to the college: “An Irish Coast Guard helicopter airlifted them to safety. Each is being treated at a separate hospital, in Galway and Limerick. Details are still limited, but they are on the mend.”

The Examiner reports the men had made their way down a goat track and were nearing the base of a 700-foot cliff when they fell, and that emergency officials were alerted around 1 p.m. Irish Summer Time Wednesday.

The names of the men involved have not been released and Centre has not released any details about their injuries. When asked about the men’s conditions, Michael Strysick, the college’s communications director, cited the The Family Educational Rights and Privacy Act and the Health Insurance Portability and Accountability Act (HIPAA). He said each prohibit the school from releasing names and HIPAA prevents him from commenting on the injuries.

“I can say we are confident that everyone will make a good recovery. We are extremely grateful to the people of Ireland for the care that they are taking of everyone and the help that they provided,” Strysick said via phone on Thursday.

The student and coach are part of the Centre College football team, which traveled to Ireland to play the Belfast Trojans on May 27, winning 47-0 against the Irish team. This is the second time the Centre Colonels made the trip, Strysick said — they traveled to compete against the Trojans three years ago. They are expected to make a third trip in 2020.

There are about 100 players on the team. Including parents and coaches who also traveled, probably more than 200 were on the trip, Strysick said. After the competition, he said some of the members stayed behind to do some traveling on their own. One group chose to stay for a few days in Galway, in western Ireland, near where the Cliffs of Moher are located.

The trip also provided an opportunity for some of the group to visit Danville’s Sister City, Carrickfergus, where they attended a breakfast at the 1170 Carrickfergus Castle on Sunday.

HEART OF DANVILLE News release Summer has arrived rather quickly this year in Danville, and the warm weather can only... read more