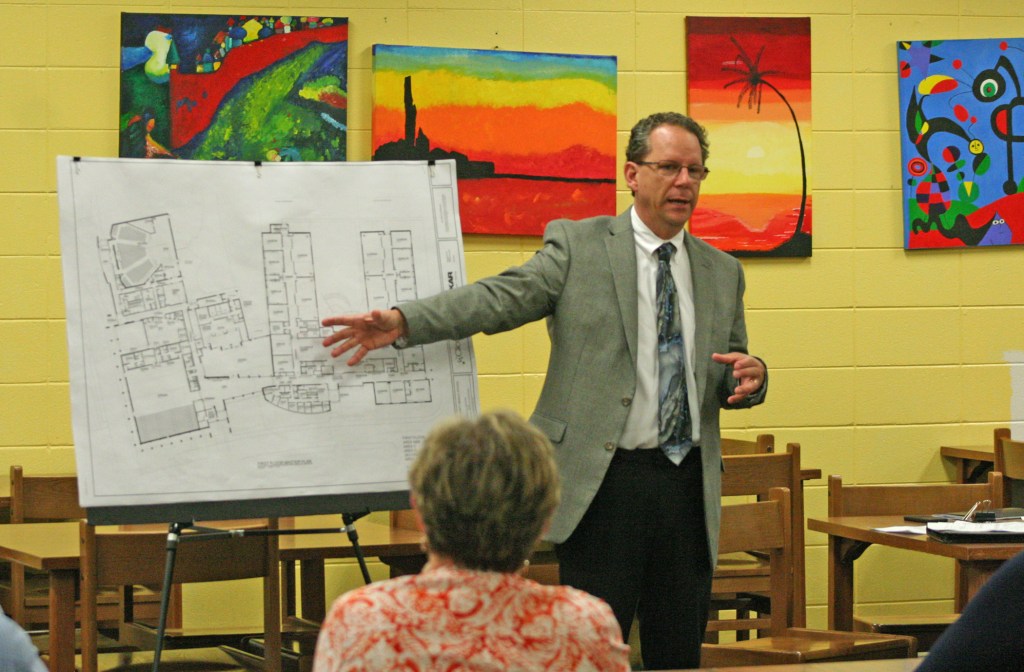 Kendra Peek/kendra.peek@amnews.com Tony Thomas, architect with Clotfelter-Samokar, presented the updated design of the auditorium for the new Boyle County Middle School to board members in a special working session Tuesday night.

The new Boyle County Middle School is likely to cost around $28 million, with the inclusion of the auditorium, according to a presentation from the architect to board of education members on Tuesday night.

“There’s a potential that this whole thing comes in at $27.8,” said Tony Thomas, architect with Clotfelter-Samokar, referring to the whole school, including auditorium. “Wouldn’t that be great?”

However, he said, he thinks the number will be closer to $28.8 million, including all the current listings. He said it would be possible to try to take some of the elements out from the auditorium area, to try to get it lower, but that the next steps would be looking at removing seating.

“We’ve shaved about as much as we can,” said Thomas to the board. “We’ve squeezed all our corners.”

The auditorium wing is currently a 500-seat auditorium, at about 16,000 square feet. It has a scenery room with adjoining dock, band room, green room, its own restrooms, an orchestra pit and more, along with doors dividing it from the rest of the school and a separate entryway, offering autonomy from the school.

Another option, Thomas said, would be to take some things out during the bidding and bid those separately later — things that won’t be needed until later in the process. He talked about kitchen equipment, bleachers, even the auditorium seats as potential alternates.

“Those are things we can pull out on bid day and start the project,” he said.

Thomas told the board that was something to continue thinking about.

“We’ve looked at some options (to make it fit the current number) … If we continue in this direction, we could be looking at $1 million over what you want,” he said.

LaFavers shared with board members that there was some cushion — the district is being reimbursed for the site acquisition cost of $708,721 and there is likely some other money available.

LaFavers said it depends on what the board wants to do at the current middle school which will be renovated into Woodlawn Elementary School, but that, “We’re still in good shape.”

Painting, replacing the tile flooring and moving some fixtures to make it more suitable for young children will be necessities for the school.

According to Boyle County Middle School principal Steve Karsner, the school has just a few more classrooms than Woodlawn does currently. LaFavers said officials at Woodlawn would like to expand the library, if possible, which might take out a few of those classrooms.

Thomas said there would be spaces, such as science classrooms, that may need renovations, too, because they might not be as necessary in the elementary school.

“You have some time to make decisions,” he said. “I don’t see any alterations on a major level that need to be done.”

Small businesses can be everyday heroes