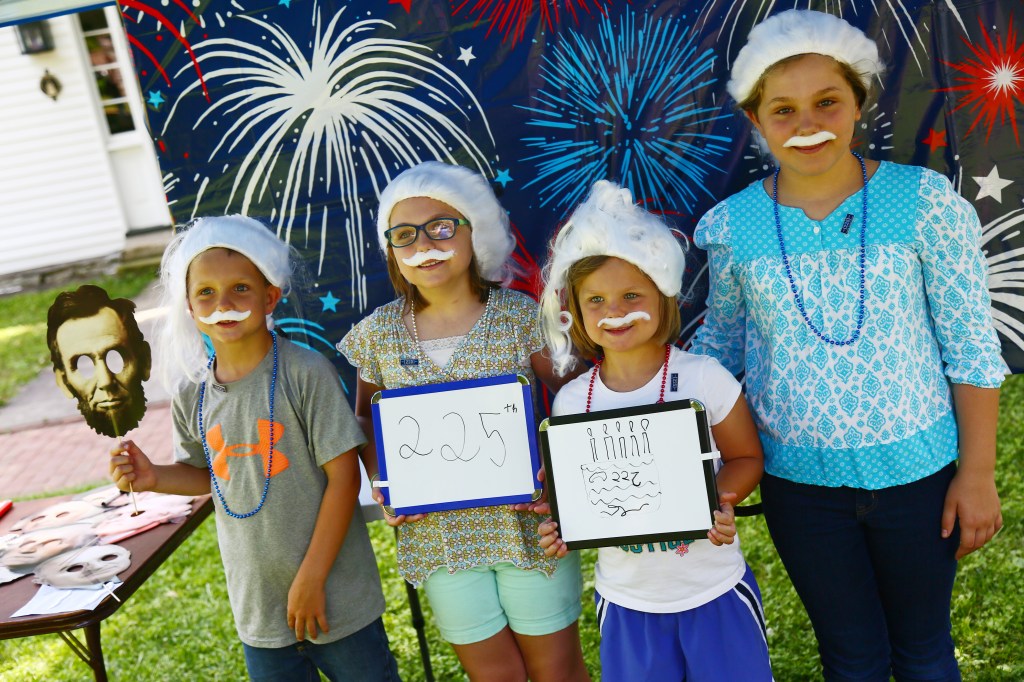 From left, Mitch, Meg, Brigid and Baker Rose Wilson pose for a photo with wigs and mustaches. The kids’ mom is Sarah Wilson. (Photo by Ben Kleppinger)

Kentucky turned 225 years old yesterday, and it celebrated with a party at the same spot where it was born — Constitution Square Park in Danville. 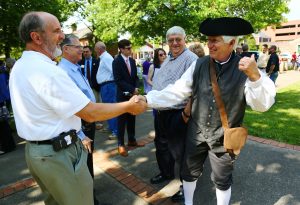 “Welcome home, Kentucky! Everybody wants to go home on their birthday, don’t they?” said Harold McKinney, Boyle County judge-executive, as he delivered a toast in front of about 200 people during the birthday celebration. “We are here in the cradle of the commonwealth. Y’all know that, right? And the hand that rocks the cradle rules the world. That’s why we think we ought to be in charge of the world in this community.”

The birthday event was promoted statewide as the kick-off for the state’s year-long celebration of the 225-year milestone. Commissioner of Travel Kristen Branscum told those gathered while the state legislature didn’t provide any funding for the 225th events, Danville and other communities around the state have been great at assembling excellent events to celebrate the state’s history.

Also in attendance was Kentucky State Treasurer Allison Ball, who has a lengthy family history to match the state’s — she is a ninth-generation Kentuckian from a family that has lived in the Floyd County area since the 1790s. 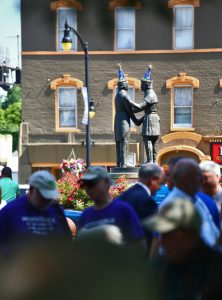 “These folks dressed up over here — they probably look about the way that my ancestors would have looked in 1790,” Ball said, referencing the reenactors who populated Constitution Square all day as part of the festivities. “It’s almost a piece of family history.”

Ball was one of four to lead the crowd in toasts of Kentucky, along with Branscum, McKinney and Danville Mayor Mike Perros.

Ball toasted the ability of Kentuckians to make a difference.

“In Kentucky, we’re a small state but we pack a big punch. We make a difference in Kentucky, and it’s because we’re a commonwealth made up of people who are individuals,” she said. “We have a great sense of everybody’s importance, everybody’s worth and everybody’s individuality in the Commonwealth of Kentucky.”

The Rev. Jim Stewart from Danville’s Presbyterian Church delivered a sermon of sorts on Kentucky’s history, highlighting famous and less-famous Kentuckians from across the state’s 225 years who fought for better things. Stewart spoke about lawyer and orator Henry Clay, black journalist Alice Dunnigan and others, including David Rice — a delegate from the Danville Presbyterian Church to the constitutional convention when Kentucky was founded. 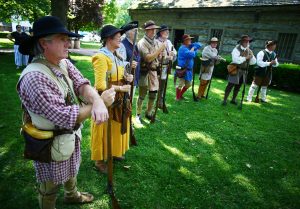 “Not only was he a delegate, he proposed a rather radical idea — that Kentucky ought to abolish slavery,” Stewart said, before reading from Rice’s statement to the convention on the evils of slavery.

Despite Rice’s moving speech, slavery was not abolished in Kentucky. But Stewart noted another native Kentuckian later would be instrumental in ending slavery — President Abraham Lincoln.

The event had much lighter moments, as well. Judge-Executive McKinney noted during his toast that Kentucky is well-known for four things: bourbon, race horses, basketball and Chevrolet Corvettes.

“Two things run through all four of those things. The things are this — we strive for excellence, but they’re all fun,” McKinney said to a round of laughter. “Which tells (me) that you can be excellent but have a good time doing it, and that’s what we’re going to do today.”

Order prints of these and more photos from the 225th celebration here.