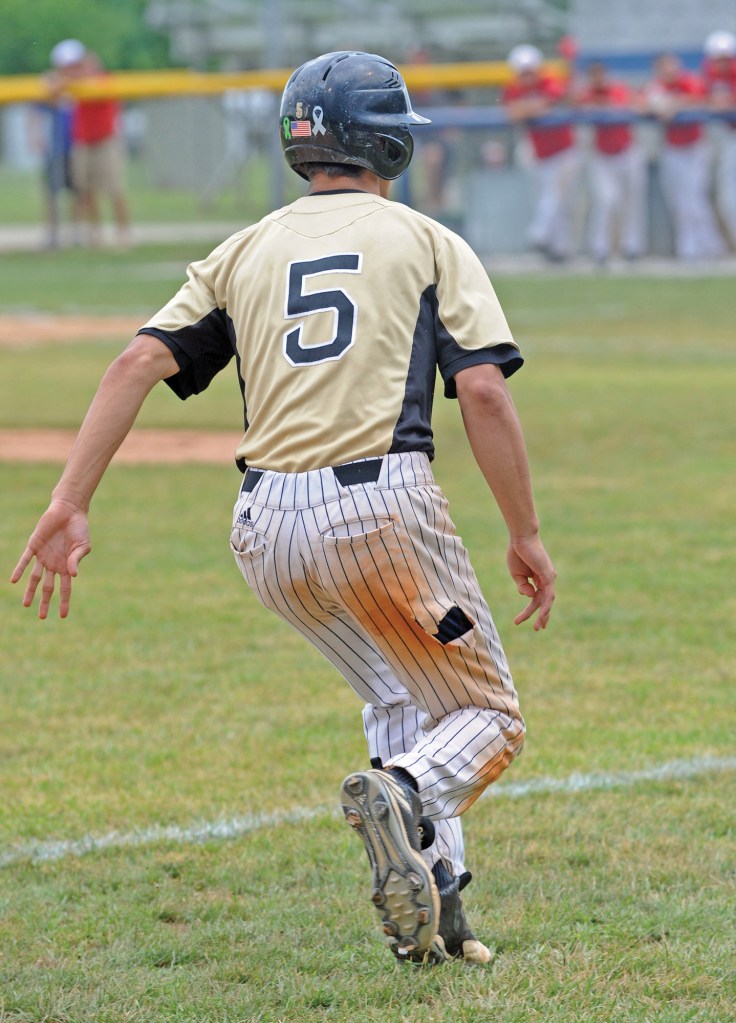 Matt Overing/matthew.overing@amnews.com Cameron Walker started the non-washing superstition after he ripped his pants during one of the first games of the season. Walker stopped washing his clothes and his teammates joined in.

Cameron Walker ripped his pants the third time he wore them this season.

Not only has the hole not been mended — he hasn’t even washed them since.

The senior outfielder started a trend that likely made all baseball moms cringe: About midway through the season, Walker said his teammates stopped washing their clothes as well.

“I knew that this hole in the pants was going to get bigger if I did wash them, so I just decided not to,” Walker said. “It was probably about halfway through the season, they just noticed I didn’t wash my clothes, so they didn’t either.”

Now the Rebels will take their unique superstition to Whitaker Bank Ball Park for the KHSAA state tournament, which begins Thursday in Lexington. They face Knox Central at 6 p.m.

The trend permeated its way to the coaching staff, as well. But head coach Kyle Wynn likes what his team is doing.

“It’s a little ripe right now, I’m not going to lie,” Wynn said with a laugh. “I’m included in that. But I like the way that the guys treat the game. They’re baseball guys. They understand that superstition is a big part of baseball. These guys haven’t washed stuff, and I’m sure hygiene isn’t great, but right now, they believe and want to keep doing the same thing over and over. It’s pretty special.”

Baseball loves its superstitions, and the Rebels have embraced it this season.

“I think it’s carried over to our energy,” Walker said.

Wynn said the team has embraced repetition in their daily lives as well.

“Guys are going to breakfast together. It sounds kind of funny, but in all seriousness, guys were staying together, sitting in the same spots, doing the same thing,” Wynn said. “And they wanted to do that as a team. All kidding aside, that was part of it. Some of the other stuff behind the scenes was even better, and I think that’s part of why we played so well this week.”

Boyle County’s play has improved when it matters the most this season: The Rebels went 8-1 in district play, winning the 45th District championship for the second straight year. This week, they won the 12th Region championship for the first time since 2005. They’re 27-11 entering the state tournament.

Walker said it has come down to energy: He leads the team with 15 walks, is second on the team with 41 runs scored this season and has 13 stolen bases.
He said the energy surrounding the 2017 Rebels is different than in years past.

“We were there for each other, but as a team, we never got loud,” Walker said. “We never had as much energy, commotion, anything like that. I think that plays a big role into winning games.”

Wynn said that excitement has been built by former players, and while the dugout energy is at a high, he said the players from the past helped shape the team to what it is today.

“I think it pays off,” Wynn said. “They finally bought in, that it’s OK to have a little fun. We’ve had that ‘too cool’ thing in the past a little bit. Now, the guys care about each other. And it hasn’t just been this year, it has been built. You can look at the other guys in our program’s past, and I hate that we didn’t win it then, but those guys are just as special as what happened out here (Wednesday in the region championship). Those guys have done a great job of getting us to this point and building something, and it carried over to this success.”