Boyle County saw a big jump in the number of felony cases from 2015 to 2016 and felonies are still on the rise this year, according to County Attorney Lynne Dean.

“It looks to me like we’re on track halfway through the year to maybe hit 500 (by the end of the year),” Dean said.

Not all of those cases resulted in indictments, Dean said, and the numbers of cases does not equal the number of individuals charged. Some individuals could have multiple felony cases or charges.

Dean said drugs are a reason for the increase in cases.

“A lot of felonies you see are possession charges. The problem is that it’s not just possessions we’re seeing, it’s not just drugs or even the trafficking of drugs. We’re seeing a lot of other felonies being committed while people are under the influence of drugs,” Dean said. “Felony thefts to get money to get drugs — I’ve seen an increase in that.

“I think one thing a lot of people don’t realize — we try to let a lot of people go to rehab. It’s Judge (Jeff) Dotson’s call, ultimately, in district court; Judge (Darren) Peckler’s in circuit court.”

Those who take the rehab option but then choose not to go or leave before their time is complete face a felony escape charge.

“There have been an increase in escapes,” Dean said.

There are also more people being charged with promoting contraband. Dean said individuals will try to sneak drugs or drug paraphernalia into the Boyle County Detention Center when they are arrested. Once they enter the jail with a contraband item, it becomes a felony offense.

She said many also face charges of tampering with physical evidence because they try to get rid of drugs in some way, such as eating or hiding them.

Of the cases directly connected to drug possession, Dean said they are seeing more charges due to methamphetamine than heroin.

One difference, however, Dean said, is that Boyle is seeing more crystal methamphetamine, which is a more potent form of the drug. It’s likely coming from elsewhere into the county, she said — the limit on purchasing drugs with pseudo ephedrine in them has helped cut down on charges for manufacturing methamphetamine.

“We don’t see the manufacturing meth charges as much, but you see just as many (for) possession of methamphetamine,” she said.

Another factor is changes in the charge for possession of synthetic marijuana, which is now a felony. Part of what makes that type of drug use scary, Dean said, is that it was being cut with other drugs.

“I have talked to some people in the course of sitting in on witness interviews and that kind of thing … They started adding things to synthetics, which is questionable because they’re already synthetics,” she said. “I have a lot of people who come in and say that they haven’t tried these drugs that they tested positive for, but they had smoked synthetics or they had smoked marijuana.

“That’s the scary thing, people are putting other drugs in there and by the time they realize it, they’re hooked on other drugs.”

Impact on the system

The increased number of felony cases and cases in general have a direct impact on everyone in court system, Dean said.

“I don’t think people realize exactly how much goes into the process,” she said.

It starts on the front lines with law enforcement, Dean said. Officers investigate all of those felony cases, but also a slew of other misdemeanor cases, as well as calls that don’t involve arrests.

“We never see some of these cases — we don’t see the ODs and we don’t see the suicides, all this other stuff they have to deal with,” she said. “It’s getting tougher to be in law enforcement or to be a first responder.”

The Boyle County Detention Center is also facing challenges, she said, because it’s having to deal with a larger number of inmates, and issues of overcrowding.

And courthouse clerks “are working extra hard to process all of these cases,” she added.

It’s up to the clerks to prepare the docket for the court room, to sit through the court proceedings, and to update what has been done in the courtroom. On Wednesday, Dean said, she had over 100 cases in court and a clerk there the entire time.

“That’s a lot for them,” she said. “Trying to keep up with our schedules around here is crazy … My staff is doing a lot. I’m asking them to do extra work right now.”

And judges — they remain busy covering Boyle and Mercer counties, spending one to two days a week in each county.

So far, the system is withstanding the added burdens.

“Everybody is working harder. We’re trying to work more efficiently and trying to come up with ideas for what we can do, but we’re holding our own,” Dean said. “Everybody seems to be doing pretty well with it.

“I know I love my job. I accepted a long time ago that this is the kind of job where I’m never going to be able to leave with a clean desk. It’s a lot of putting out fires … That’s OK. We have to prioritize and if there’s an emergency situation that we have to knock out, there are other things that will wait.”

The Boyle County Circuit Court ranked 42nd in Kentucky with 549 cases in 2016.

Other counties in the region had the following rankings in 2016:

“I think that’s pretty up there for Boyle County,” she said.

While felony cases have gone up, certain types of violations — such as DUIs — have gone down, Dean said. She’s also seeing fewer traffic tickets.

“I think all of our law enforcement agencies — Perryville, Junction, Danville city police, Boyle County Sheriff’s Office — I think that there’s always an overall community safety in mind. They’re driving around and looking for things, but I think they don’t have as much time to look for speeders because they’re going to all these other calls for drug-related things,” she said. “People are more brazen about where they’re going to do drugs. They don’t have the inhibition or fear of getting caught anymore.

Dean expects the number of felonies will continue to increase, but the problem needs to be tackled. She said the community is getting better about “not taking chances and not staying quiet.”

“They’ll call it in … there’s an education piece getting out there, where people know they can call. We will not think you’re crazy if you call something in, if you think you see something,” she said. “They’ll check it out and make sure everything is good. People passed out at a gas station, behind the wheel — people can be dying. 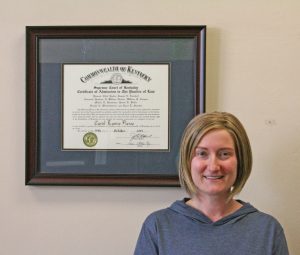 Kendra Peek/kendra.peek@amnews.com
Lynne Dean will be taking over as Boyle County Attorney as of April 1, replacing the retiring Richard Campbell. Dean has been the assistant county attorney for nine years.

Music fills the air at Shaker Village and Beaumont…