Antique bicycle group has been attending Brass Band Festival since 1990 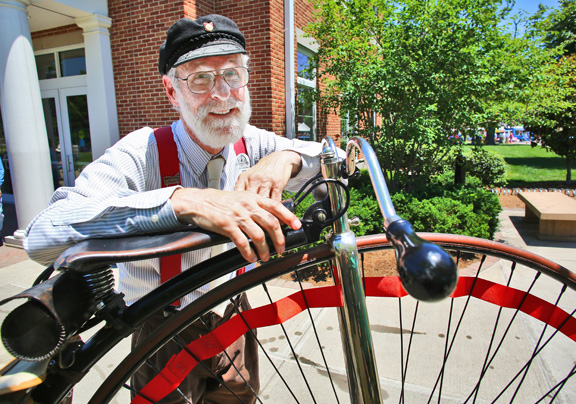 For almost as long as the Great American Brass Band Festival has been around, there have been “high wheel” and antique bicyclists pedaling the streets, adding their unique style to the festive atmosphere.

The international antique cycling group “The Wheelmen” has been joining the brass bands in Danville as far back as 1990, according to archives from The Advocate-Messenger.

Ohio Wheelman Captain Richard DeLombard has been bringing his antique bikes to the festival since 2008, making this his 10th year.

“It’s just a fun thing to do,” DeLombard said Saturday. “It’s all voluntary on our part. Plus here, you get music for free.”

The Wheelmen have member groups around the nation and even some international members. In all, there about 900 of them, DeLombard said. About 15 members from Ohio, Michigan, Indiana, Kentucky and Tennessee came to the Brass Band Festival this year.

According to The Wheelmen’s website, “The Wheelmen is a national, non-profit organization dedicated to keeping alive the heritage of American cycling, promoting the restoration and riding of early cycles manufactured prior to 1918, and encouraging cycling as part of modern living.”

High wheel bicycle racing used to be quite a big deal in the 1800s, DeLombard said. Serious racers, most of them wealthy men, would make their seats as slim as possible in order to allow their wheels to be bigger while still being able to get up on the bike. Bigger wheels equaled what would be considered today a higher gear, allowing for faster top speeds, he explained.

DeLombard said he grew up “on the shores of Lake Huron.”

“We call it the north coast as opposed to the east coast and the west coast,” he said. “… I grew up in rural Michigan and bikes were how you got around.”

DeLombard said he first stepped up onto a high wheel bicycle — which used to be called “standard” bicycles when they were indeed the standard type — in his 20s. He loved it, and “if the guy had been a better salesman, I probably would have bought it” then. But he didn’t at the time. In 2007, he realized he wanted to do it and got himself a high wheel bicycle.

Now, he’s biked hundreds of miles, including participation in a July 4th event in Washington, D.C., and a Football Hall of Fame induction ceremony in Canton, Ohio.

In the early years of the Brass Band Festival, The Wheelmen were associated with “Mary the elephant,” a retired circus elephant who would come to the festival, DeLombard said.

Mary attended after bicyclists attempted one year to perform as a bicycling brass band. It was a short-lived, one-year-only performance in 1992, according to Advocate-Messenger archives.

The organizer “thought that was too dangerous, so he arranged to get the elephant the next year,” DeLombard said.

An article in a 1992 Advocate-Messenger announces plans for a performance by St. Johns Bicycle Band. The band practiced for six months before giving a single, four-minute performance at the Brass Band Festival, then disbanded, according to archives. 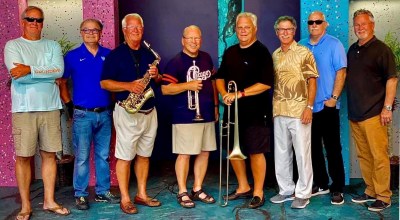 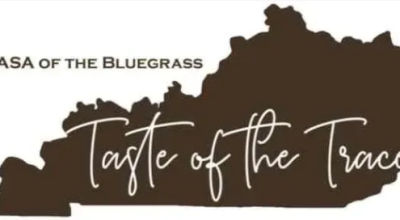