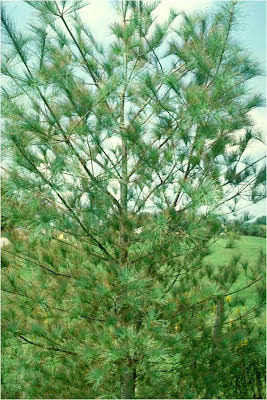 White pine decline — is there a solution?

Those who follow gardening news are probably very familiar with the current trend to plant natives whenever possible. Exactly what defines “native” is a question of some debate. Does native mean naturally occurring and thriving in a geographic region, a state or in North America?

When it comes to white pines — trees admired by landscapers for their imposing height, fast growth, and graceful appearance — most would agree that these trees are native to our area. That does not mean, however, that they will do well in all backyards. 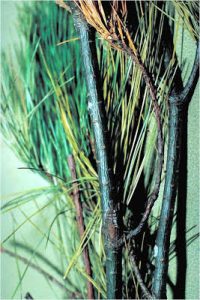 White pines may start promising and even flourish for a decade before they begin to have yellowing or browning needles (inconsistent with the normal fall yellowing and shedding of needles), shriveling bark on trunk and branches and oozing sap. If these symptoms are present, the likely cause is white pine decline. The solution? Unfortunately, there really isn’t one.

Since white pine decline is caused by adverse environmental conditions rather than a disease caused by a fungus, bacteria or pest, there is little a homeowner can do to treat the condition other than moving the tree to a more suitable location — which itself is not very practical.

The trees prefer a loose, loamy soil that has a pH of about 5.5. Adding amendments to the soil, such as mulch to loosen the soil, and adjusting acidity with granular sulfur can help, but it often is not a long-term solution, especially in our area where clay subsoil is common.

Our hot, humid summers are another factor that can’t be controlled. White pines don’t tolerate heat or drought well. Add in a rainy season on top of clayey soil and one common name for the tree — coffin pine (because they were once a popular wood for coffins) — takes on a whole new meaning.

Does this mean that this native tree should not be planted in our area? Not necessarily. It means that with anything we plant, we should first considered the plant’s suitability for the location. 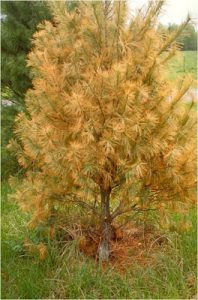 Those who want a white pine on their property should do a soil test (tests are free through the Boyle County Extension Office) to see if the soil has a favorable pH. They should also do a simple “perc test” to calculate soil water absorption, and they should choose a spot with loose soil that will allow for the tree’s extensive root development.

So, although you probably won’t be able to save a white pine that is in decline, with a bit of forethought and the right location, homeowners, and generations after them, can enjoy native white pines—which in the right conditions can live up to 450 years. 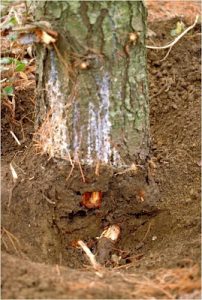