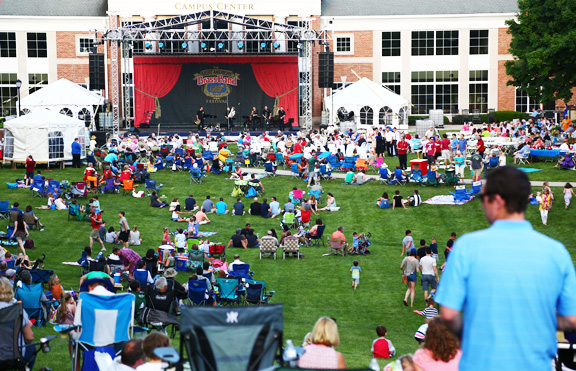 The Roaring 20s was alive and well this weekend, due not only to beautiful weather but an increased attention to marketing, says Great American Brass Band Festival’s executive director, Niki Kinked.

The 20s theme was seen throughout the picnic, with some table groups dressed up as flappers and gangsters from the era.

“We’re putting a lot more effort into marketing and making connections in the world of music, inside and outside of Kentucky,” says Kinkade, who believes that’s part of the reason the organization keeps seeing an increase in attendance numbers.

And, of course, there was the beautiful weather all weekend long, which was different from forecasts earlier in the week, which said not only rain but hinted at chances of thunderstorms in the area.

“We couldn’t have asked for any better weather,” Kinkade says. Jokingly, she says they “weren’t stressing out about it at all” about rain … “We had out-of-towners calling, asking if they should come. We know Kentucky weather, and how it changes.”

GABBF had its rain plans organized for each and every event, but thankfully didn’t have to go into overdrive to relocate anything.

Kinkade says she thinks some may have cancelled their plans due to the forecast early on, but if so, it certainly wasn’t seen in the crowds.

“Our crowds were nice and big. This was surely the biggest one I’ve seen in my tenure with the Brass Band.”

No firm numbers are in yet and she’s not sure exactly when they will be all totaled up, but Kinkade says Beaumont Inn in Harrodsburg reported a healthy 400 for its Friday night concerts — the largest it’s ever seen. Bayou and Brass was a huge hit as well, with many return guests commenting on the new “plaza setup” at Weisiger Park.

“We heard a lot of compliments about how nice everything looked there. And it will be even better when we have more shade, when all that’s done, so that will be good. Just a lot of nice comments on the use of the space and how well it all works.”

The addition of the luck dolls during the Bayou event — a craft event for kids inspired by voodoo — went over extremely well, she says, and the kids loved it.

Sure, there were some behind-the-scenes hiccups, as there always are with an event of this size, but Kinkade says she’ll never tell.

There are intense logistics that come into play with getting each band on stage on time, getting trucks set up where they need to be, and so on, she said.

But as long as all visitors see the GABBF organizers and volunteers cheerfully smiling, she’s happy.

“We had so many comments from people at the Arts Fest — it went over so well, again. The artists absolutely love it and they sell their pieces. And they all talk about how friendly the town is, how helpful everyone is here.” The only art booth that didn’t sell as well was homemade furniture — it’s hard to take home large pieces of wooden furniture if you’re visiting from out of town.

“The table numbers were a bit down for the picnic, but again — we certainly didn’t see that in the crowd,” Kinkade says. “And we did have people putting up tents in the middle of the lawn, which obstructed others views and is not allowed. So that’s something we’ll be more vocal about next year.”

This year was technically the first year that alcohol was sold on the premises at Centre College. Last year would have been the first, but the event was moved inside due to the weather and organizers weren’t setup to sell inside.

“It’s gotten to be such a big event, it’s hard to keep an eye on. With the alcohol addition, we have to stay on top of absolutely everything that could create a liability issue for us,” Kinkade says.

However, according to Police Chief Tony Gray, there were no incidents he knows of involving alcohol. But he did give the disclaimer that he hadn’t been briefed all the way.

“I’ll meet with my staff tomorrow (Tuesday) and see how the supervisor found things, but I haven’t heard of any significant arrests or any problems due to drinkers,” Gray said. In his second year on the GABBF Board, Gray said he was more involved in logistics this year than he was the first time around.

“With things like the Boston Bombing … it’s just a different era and time. From a security standpoint, we have to watch out for things that people aren’t even aware we’re watching out for.” He says they didn’t have anymore officers on staff than a normal shift — and a few enlisted officers  were even out of town on National Guard duty.

Gray said not only as chief, but as a board member — he’s proud the way the town handled the event, and the way the people conducted themselves.

“A few years back, when Bayou and Brass first started, we had some issues with some people trying to bring outside alcohol in. But once people understand the rules, I feel like it’s turned into a really fluid event.”

He admits — there are growing pains for a festival of this size. “You have to think about how to introduce the element of alcohol into the festival, but still keep that family feel to it. It is changing, but I think everyone’s doing a good job.”

Gray got a bigger dose at the logistics that go into the event as a whole this year, he says. “I was a little more involved with it this year, a little more hands-on. I got to see the festival from a different view. I don’t think people realize the inner-workings, who does what and when, how much it takes to put a festival of this size on. So yes, I’m proud when it goes off well and without any hitches. It’s good for the city and our community.” “We’re just so very lucky to have dedicated people who help us pull everything together,” Kinkade says.

Sunday’s numbers, which are traditionally the lowest for the weekend since it’s closing day, seemed to be up. Kinkade says based on what she saw — “It was the biggest for a Sunday I’ve seen in many years. I had a few people say to me they thought Sunday attendance seemed small, but I think that’s because Saturday was so huge.”

“I felt that the … 11 months of hard work paid off,” said Leigh Jefferson, associate director with GABBF.  “Nothing sells better than a happy crowd that’s enjoying all the world-renowned bands.”

As the saints of Big Brass marched on and off the main stage Saturday afternoon, donors flocked to the front for the Great American Picnic and got hip to its speakeasy theme.The picnic is the festival’s biggest fundraising event. Companies represented included the City of Danville, Pepsi Co., Hobart and United Warehousing, among others.

GABBF gave out festival posters this year for the best decorations in four categories:

• The Hemingway Award went to Jane and JP Brantley.

The looming question for Niki Kinkade from many is: Will you stay or will you go? She’s currently serving as interim director of the Community Arts Center after former director Mary Beth Touchstone’s retirement.

“I know CAC is working on a job description for the perm position and putting it out soon, and as I spend more time here, I find it to be just as I assumed — a wonderful place. I haven’t made any decisions yet, honestly I just don’t know. I’d like to say ‘Yeah,’ but I”m not 100-percent sure, and I need to see the job description and make sure it’s a fit for me. My degree is in art history, and I worked in galleries, so my pre-Danville life supports those interests.” 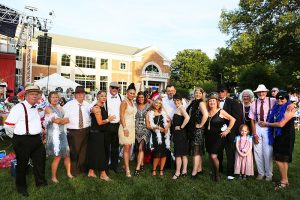 Goldie Financial employees and guests pose for a photo after winning the Razzle Dazzle award for creative costumes. 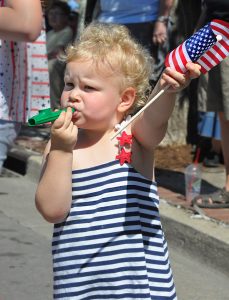 Photo by Robin Hart
Hattie Mast, from Atlanta, toots a kazoo and holds up a tiny American flag during the annual parade Saturday. 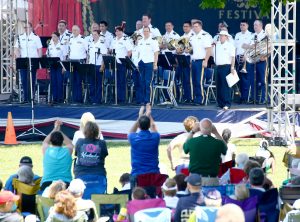 Ben Kleppinger/bkleppinger@amnews.com
The crowd at the main stage applauds the 202nd U.S. Army Band as they take a final bow Saturday afternoon.

Ben Kleppinger/bkleppinger@amnews.com
Festival-goers fill the lawn in between performances at  the main stage Saturday evening.