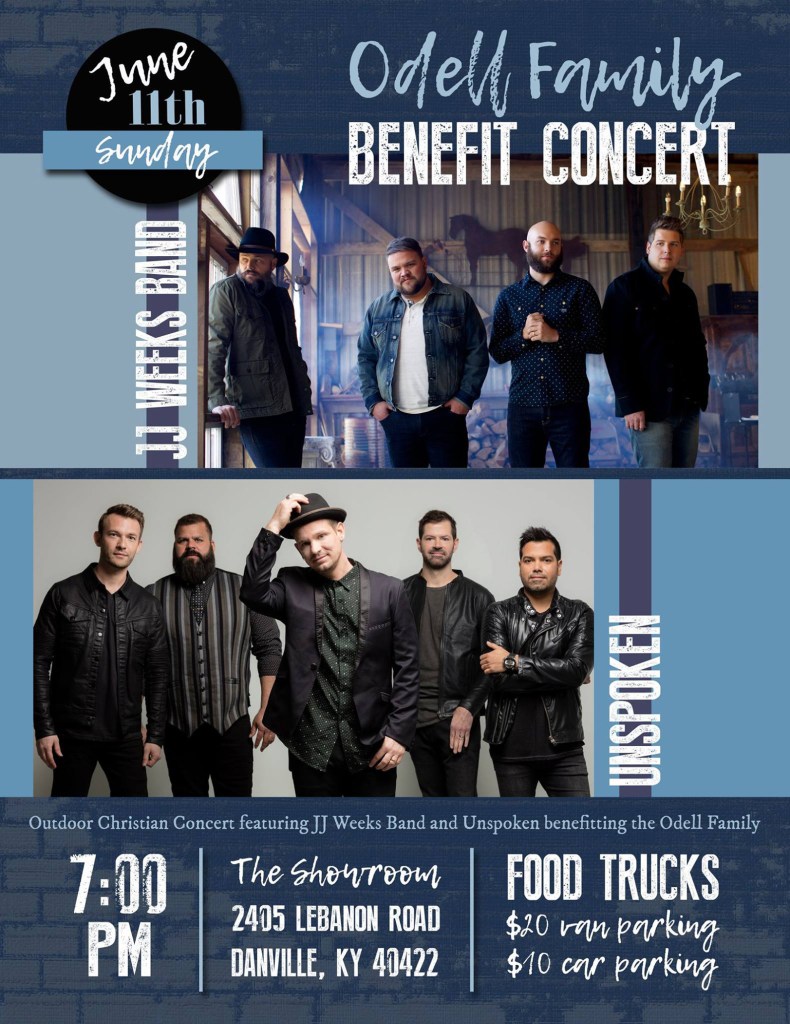 On Sunday night, the community will have a chance to rally together to support a Harrodsburg family as they recover from a crash that claimed the lives of three family members and left a fourth in the hospital.

“I think it’s an opportunity. It’s a way to show love,” said Jason Kilby, lead pastor of Centerpoint Church, which is partnering with The Showroom in this event. “They’re very involved — here’s a pastor that pours his life out into other people. Here’s a school teacher that’s pouring her life into other people. Here’s a great opportunity for our community to give back.”

Nicole Glasscock, who manages The Showroom and organized the event, said it was one of the many things they try to do to help the community. Initially, she said, they were simply planning to host a Christian concert for the community, but when the tragedy happened on May 11, it became a way to help this local family.

“It’s a way for us to give back to the community … we can rally around this family and support them,” she said.

The performers are the JJ Weeks Band and Unspoken, which are both contemporary Christian groups.

Glasscock said she had been inspired by Joel and Kelly Odells’ faith, which the couple have shared on their respective Facebook pages since the crash.

The young girl is now home, recovering, with a broken arm and other injuries, according to posts on her parents’ Facebook pages.

Kilby said it was impossible to explain such a tragic event.

“The only thing we can do is walk with them through the journey and hopefully demonstrate the type of love that Christ does,” he said. “This is not going to heal it, but this can at least come alongside and say we care.”

“It’s a chance to give back. At the end of the day, that’s what it is, a chance to love on people.”

Glasscock and Kilby said that’s what they try to do — The Showroom and Centerpoint have teamed up previously, hosting Easter, Christmas and Halloween events at the venue.

“The hearts behind The Showroom and the people who work here — are for the city. It aligns to our vision and our mission — we’re for the city,” said Kilby.

The benefit will be held outside, and will charge per carload — with $10 per car and $20 per van, all which goes to the Odell Family. There will also be food trucks at the event, and a portion of those proceeds will benefit the family. Donations will also be accepted.

Kilby said they expected the event to be over by 10 p.m.

“It will be a good evening,” he said. “I thank those who have seen the need and rallied behind. Those people, especially those involved in the showroom, say thank you on behalf of the family.”

They ask everyone to be “flexible” when it comes to parking and to be prepared no matter the weather, because the event will go on, “rain or shine,” Glasscock said.

The benefit for the Odell Family will be 7 p.m. Sunday at The Showroom, 2405 Lebanon Road, featuring local artists, as well as the JJ Weeks Band and Unspoken. Gates open at 5:30 p.m. for the outdoor concert, and the cost is $10 per car-full, $20 per van, which all goes to the family. Participants are encouraged to bring lawn chairs — the event will happen rain or shine. There will also be donations accepted, and there will be food trucks on site. A portion of the proceeds from food sales will also go to the Odell family. There is currently a GoFundMe set up to help the family as well at http://bit.ly/odellfamily

Although numbers not in, director says GABBF 2017 crowd…