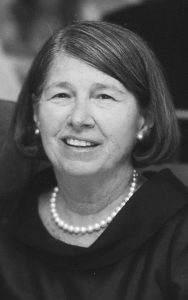 Wendy Gardiner Lewis, 78, died on June 4, 2017 in Lexington of complications from leukemia. The beloved wife of Robert K. Lewis, Jr., she was a resident of Danville, KY. Born in Chicago on August 21, 1938 to the late Judge William G. and Mary Gardiner, Wendy grew up in St. Petersburg, FL where she was a 1956 graduate of St. Petersburg High School.

She married Robert K. Lewis, Jr. on June 18, 1960 at the Cathedral Church of St. Peter. As a career Naval officer’s spouse, Wendy was a devoted wife raising their children, Mary Elizabeth, Mona, and Rob in New York, Florida, Washington, DC, Virginia, Hawaii, Rhode Island and Maryland before moving to Kentucky.

Wendy’s kindness toward others made her a valuable and loyal servant to each of these communities and the friends she made. Wendy’s spirit and love of sports was evident in her support of the USNA athletics and when the Florida Gators and the Kentucky Wildcats competed, she would wear her blue and white for the Wildcats and her orange socks for her Gators because she wanted everyone to win.

A lover of history, she became heavily involved with the traditions of her adopted state. Living at Forest Hill Farm she oversaw the restoration to have it placed on the National Register of Historic Places in America. She was actively involved in the Junior League Sustainers’ Garden Club at the Bodley-Bullock House, Preservation Kentucky, and the Boyle County Landmark Trust and The Garden Club of Danville. She was a member of the Presbyterian Church of Danville, Keeneland Club, Danville Country Club, and St. Petersburg Yacht Club.

Visitation will be held from 10 to noon on Thursday, June 8 at The Presbyterian Church of Danville, 500 West Main Street, Danville, and a Funeral Service will follow at 12 noon. Reverend James Stewart will be presiding. Burial will occur in the Lexington Cemetery at 3 p.m. In lieu of flowers, memorials are suggested to Boyle County Landmark Trust, P.O. Box 1693, Danville, Kentucky 40423-1693.