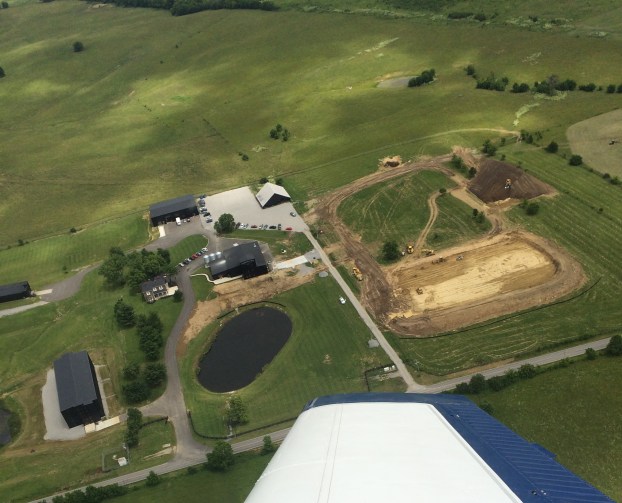 Photo by Robert Caldwell Construction activity at Wilderness Trail Distillery in Danville is seen from a plane flying above on Wednesday.

Wilderness Trail Distillery is planning a $9.91 million expansion at its Danville farm that is projected to sextuple its output and add 10 new jobs. The expansion, which is expected to be completed in January, is being helped along by the state to the tune of up to $350,000 in tax credits and incentives.

“We are a family-owned and operated distillery and this milestone helps us secure the ability to continue to grow now and in the future here in the commonwealth,” co-founder and master distiller Shane Baker stated in a news release announcing the expansion. “We are excited to bring more job opportunities to our neighbors and more for visitors to experience in our beautiful historical community and great state of Kentucky.”

The project will “expand” Wilderness Trail’s current facilities and involve purchasing and installing new equipment, according to the release.

“We have an 18-inch one now so we’re doubling the size of that,” she said.

“The project will raise the distillery’s output from 6,000 barrels annually to approximately 36,000, bringing new capacity for both its own brands and contract distillation,” according to the release.

The 10 new employees will “fortify its two shifts,” according to the release. Toadvine said the new shifts are expected to begin in July.

The distillery is the first business in Boyle County to qualify for any state financial incentives in 2017, according to a search of KEDFA’s database.

The release announcing the expansion and incentives quoted several local officials on the matter:

• Danville Mayor Mike Perros: “This is exactly the kind of economic development we want, and I applaud them for their entrepreneurial spirit and efforts.”

• Boyle County Judge-Executive Harold McKinney: “I commend Boyle County’s first distillery for not only making local history, but also once again creating jobs and reinvesting in the future of the Birthplace of Kentucky.”

• State Sen. Rick Girdler: “We anticipate that this investment will further raise the profile of one of our valued local businesses, and we are always pleased to embrace new job opportunities in the Boyle County community.”

KEDFA took action on the tax incentives on May 25. Kentucky Gov. Matt Bevin formally announced the project on Tuesday, stating that “Wilderness Trail’s expansion will create exciting opportunities for people in the Boyle County area and beyond, not only in relation to new jobs, but in attracting new visitors to the area as well.”

Wilderness Trail Distillery opened in downtown Danville in 2012 before moving to its current Lebanon Road location, on farmland on the edge of Danville City Limits, in 2014.

The distillery is a member of the Kentucky Bourbon Trail Craft Tour. According to Gov. Bevin’s office, the distillery attracted 20,000 visitors last year. 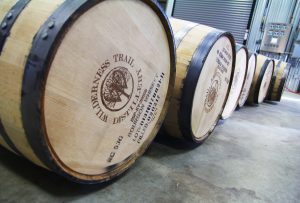 File photo by Amanda Wheeler
Barrels of bourbon wait to be transported to rickhouses at Wilderness Trail Distillery in February.

Earlier this year, the distillery expanded its footprint by purchasing an additional 13 acres, with plans to add a new rickhouse for storing bourbon barrels and provide a space for festivals and outdoor events. In March, the Kentucky State BBQ Festival announced it would be relocating from downtown Danville to the distillery property this Sept. 8-10.

The distillery’s offerings currently include rum and vodka. It plans to release its first four-year-old bourbon this December.

In a potentially related move, the Danville-Boyle County Planning and Zoning Commission approved Wednesday morning a site plan for work at the distillery property.

Kendal Wise with Vantage Engineering told the commission the plans would “make full use of the 33 acres that they own now.”

Wise said the plan includes three new barrel warehouses and an addition to the distillery production building. It will double the footprint of the distillery, Wise said, and “significantly” increase production.

Jennie Hollon with the office of Planning and Zoning said industrial sites which are undergoing development projects must devote 10 percent of the area to landscaping and planting trees. However, existing tree canopies can account for 50 percent of that.

Wise said that tree canopies currently account for 64,000 square feet of the total property, compared to the 50,000 the distillery would be required to plant if there were no trees.

Wise requested they be allowed to use the existing trees in the count. Otherwise, “before you know it, you have a forest out there with no industrial use.”

“If you approve a no new planting requirement — regardless of what you approve, they’re still going to plant 40 Holly trees. They’re not bad guys, they’re really good clients … They want it to be a beautiful place — it already is, they’re doing even more,” Wise said. “They are not bad people.”

The commission approved the site plan with the landscape changes.

Wilderness Trail co-owners Shane Baker and Pat Heist were not immediately available for comment on whether or how what was approved at P&Z is related to the $9.9 million expansion. 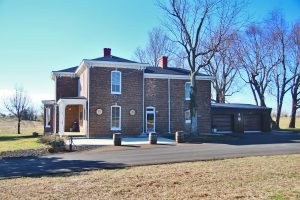 File photo by Amanda Wheeler
The historic Willis Grimes House at Wilderness Trail Distillery was built in 1859 and is listed on the National Register of Historic Places. It serves as the distillery’s visitor center and gift shop.

Items sold to raise reward money for anyone whose tip leads to her discovery  Two years after the disappearance of... read more