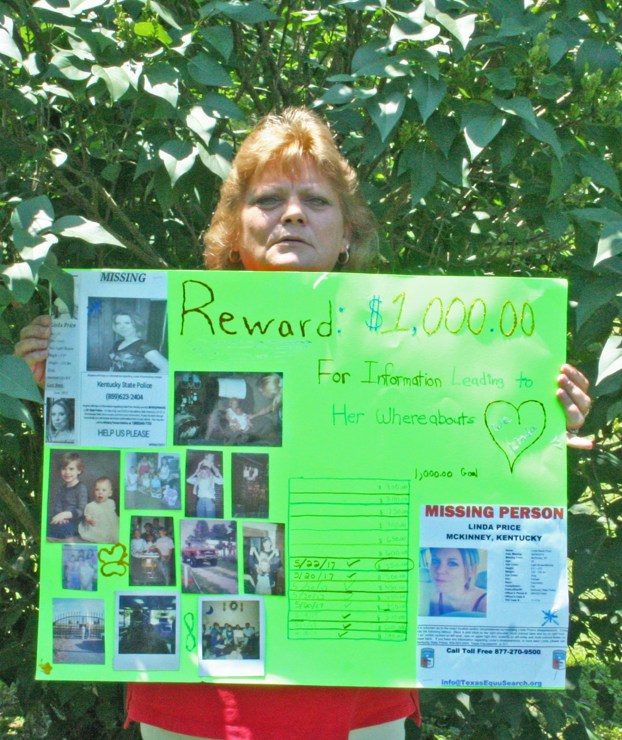 Kendra Peek/kendra.peek@amnews.com Mary Sargent, mother of Linda Price, wants answers regarding the disappearance of her daughter two years ago. She is working to raise a $1,000 reward through T-shirt and visor sales and donations and is over halfway there.

Two years after the disappearance of her daughter Linda Price, Mary Sargent seems to know better than to think Price may come walking through the door.

“I don’t have as much hope today as I did, say, six months after she was missing,” Sargent said. “She’d have never missed a Mother’s Day or my birthday.”

But she’s not ready to completely give up hope or stop searching for answers.

The two-year anniversary of Price’s disappearance is today. Her family is still seeking information on her whereabouts. Sargent has organized a drive to raise funds by selling T-shirts and other items in order to offer reward money to someone who comes forward with information leading to Price. Her goal is $1,000.

“Linda has two babies that need answers,” Sargent said about her grandchildren, Tyler Chase Ellis, 13, and Paisley Ellis, 11. “I’m hoping the reward will make someone come forward and just tell us where she is.”

Sargent said people can contact her via Facebook if they have information. If money is not used for the reward for some reason, Sargent plans to use it to help pay for a funeral for Price.

There are a lot of unknowns surrounding Price’s disappearance, which happened in the McKinney area of Lincoln County in 2015.

Sargent last spoke to her daughter in May 2015. Their relationship had its problems, but they were trying to improve it.

“She and I were estranged,” Sargent said. “ … we were going to work on our relationship.”

But the chance never came.

Price also spoke to her father, Tommy Wilson, on June 8, after the death of her grandfather — the last time anyone talked to her.

There were a lot of rumors surrounding Price’s disappearance, specifically that she had been murdered, Sargent said. That’s part of what prompted her to file a missing persons report on Aug. 3, 2015, with the Kentucky State Police. She said she decided to contact KSP instead of local law enforcement because there wouldn’t be an issue of county lines.

According to Trooper Frank Thornberry with the Kentucky State Police, there have been people who came forward with information, but no one who seems to have seen Price last.

“I have followed up on a lot of information that has come into post,” he said.

Thornberry said it’s a matter of wading through the bad and good information to find out what really happened. They’ve followed the leads, he said, some of which has led to the Tunnel Road and Angel Ridge Road areas of Kings Mountain.

And any tip that comes in gets investigated, Thornberry said.

“Any theory, I don’t just throw it to the side,” he said.

While it’s currently unknown if Price was murdered or simply disappeared, Thornberry said the case is still investigated in the same way.

Getting people to talk is the hardest part.

“You’ve got to try. Sometimes, (people) won’t talk. You can’t force somebody,” he said.

Nothing has been uncovered to help bring Price home.

“She loved her babies,” Sargent said. She describes her daughter as a “giving person,” extroverted and outgoing and as someone full of life.

“She was sweet and kind. She’d make you laugh,” Sargent said. “She always had a smile on her face.”

“She was my second one, my only daughter,” Sargent said.

But she can’t think of her missing daughter without thinking of others who are also seeking answers in their loved ones’ disappearances or tragic deaths.

According to the National Missing and Unidentified Persons System, through the National Institute of Justice, there are 219 people who have been reported missing in the state of Kentucky.

Besides Price, locally, those names include:

Thornberry said the disappearance of Price and Gorley within weeks of one another was strange, considering they were part of the same group of friends.

“Whether the disappearances are linked, I do not know,” he said.  “All I can tell you is I keep on working them.”

Thornberry is also working on the case surrounding the death of Desiree Sparks, who went missing in September 2016 and was found dead in a wooded area in Lincoln County less than a month later. As far as he’s been able to tell, Thornberry said, there was nothing linking Sparks to Gorley or Price.

“Any information on any of these cases is gladly accepted,” Thornberry said, encouraging people to call the Kentucky State Police at (859) 623-2405 or their local law enforcement agency.

Since the disappearances of their children, Sargent has become close to Gorley’s mom, Sandra Hasty, who reached out to her after Price went missing.

“Sandra has been my backbone through this. We’ve been there for each other,” Sargent said.

Their bond has grown, she said, because they each understand what the other is going through.

Mourning the loss is difficult, she said, because it’s unlike mourning the dead.

“It’s been hard. It has been a slow grieving process with no closure. Everyday, I wonder, ‘Is that phone going to ring?’ ‘Am I going to get answers?’ There are days I try not to cry,” Sargent said. “I try to have a normal day. Yesterday was not one of those days.” 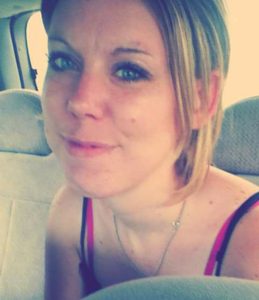 Photo submitted
Linda Price went missing two years ago Thursday, and her family is raising a reward to find out what happened to the daughter, sister, and mother of two.

Editor’s note: This is the first of two stories on Tuesday’s meeting between the Boyle County Fiscal Court and economic... read more