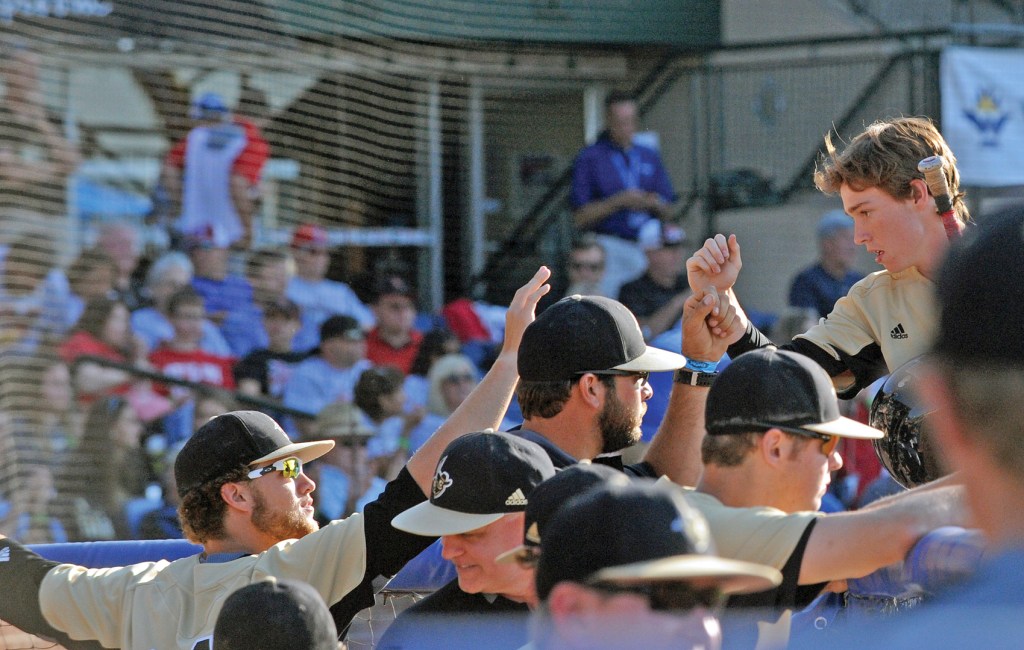 Matt Overing/matthew.overing@amnews.com Cameron Yates (far right) is congratulated in the dugout after scoring during the first inning of Thursday's game in Lexington.

Boyle batters struck out 15 times, the most in any game this season. It’s just the third time this year the Rebels have struck out more than 10 times in one game, and the first time it has happened in a loss.

“We haven’t seen that all year,” Boyle coach Kyle Wynn said. “A little bit more surprising was that we scored four runs in the first inning. We battled back and it looked like on offense, we were going to click. But (Hill) settled in on the mound, hats off to him, he did a nice job.”

The Rebels plated four runs in the first inning, capped by a three-run triple by Ty Dragan. Dragan scored Cameron Walker and Karson Thompson and was brought home after an errant throw reached the stands.

Kaden Gervacio would triple to bring in Cameron Yates for Boyle’s fourth and final run of the first inning.

Wynn said his team had the momentum after the first, but it shifted when Knox Central continued to bring in runs inning after inning. The Panthers scored at least one run in the first five innings, including a four-run outburst in the fifth inning.

“I don’t think we were overconfident, part of it was momentum just shifted,” Wynn said. “They kept scoring and we struggled to stop them. That fifth inning was the nail in the coffin. They were just chipping away and we weren’t doing much on offense. When you’re out here on the big stage, you get behind and you get nervous, it’s tough to overcome.”

Sam Tiller started on the mound for the Rebels, pitching the first four frames. He gave up six runs (five earned) while striking out four.

It was just Tiller’s second loss this season. 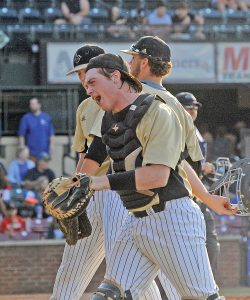 Matt Overing/matthew.overing@amnews.com
Hunter Mason celebrates after throwing a runner out to end an inning against Knox Central.

Thompson pitched the final 2 2/3 innings for the Rebels, striking out three. He didn’t allow a run.

Most of Knox Central’s runs — including two in the first — came with two outs. Part of the problem for the Rebels was playing on a larger field — hits that could have been caught were instead bloop singles to the outfield.

“We just needed somebody to come up with a big play,” Wynn said. “It’s a big field, a lot of balls dropped in here and there where if we were to make a play somewhere it might have been a different story.”

The Rebels finish 2017 with a 27-12 record and the program’s first state tournament appearance since 2005.

“I’m proud of our guys,” Wynn said. “They did a nice job. The accomplishment they had to get here in the first place is something that they’ll remember forever, getting to play on this field. I’ve got a good feeling that we’ll be back.”

The Rebels certainly have a chance to return, with Walker as the lone graduating starter.

“There’s a good young core,” Wynn said. “We’ve got three seniors and you never want that for them, but I think everyone else is just as hurt. I can see it in their faces right now. Hopefully it’ll drive us to get back, we know it’s not easy to get here.”