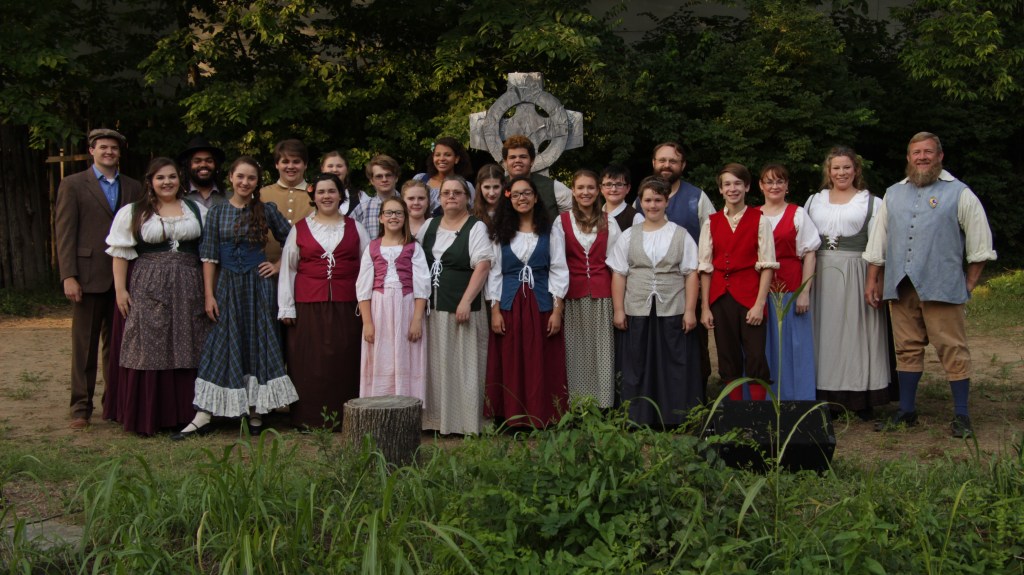 Allan Barlow took time out of his schedule for a Q&A about “Briggadoon,” to be performed at the James Harrod Amphitheater.

AM: For those not familiar with the story, can you tell us a little about it?

AB: “Two New York businessmen, Tommy Albright and Jeff Douglas are on a hunting trip in Scotland and wind up getting lost. When they check their map, the find they are in the middle of nowhere. However, while trying to figure out where they are, a mysterious mist appears in the valley beneath them and a town magically appears. When they investigate, they find the people in a town called Brigadoon in the midst of a town fair. They are introduced to the many faces and families of Brigadoon … They find out that Brigadoon appears only once every 100 years. To the people of Brigadoon, 100 years passes each night they go to bed and awake the next day. However, the spell may be broken when a member of the town leaves, thus leaving Brigadoon to be vulnerable to outside evils… That’s where I am going to end the story. Audiences will need to come to find out how the story ends and if Brigadoon’s spell is broken.”

AM: What’s appealing about this production/what got it on the production schedule for this year?

AB: “The most appealing thing about this show is how love can overcome any obstacle. The hauntingly beautiful melodies and the actors’ interpretation of the songs bring this love story to light in a very unique way. Miracles can, and do, happen and this story is proof of that fact. Brigadoon is a musical that has never been brought to the RECT stage, and to my recollection, any local theatre stage. If it has played, it has been more than 20 years ago.

AM: Was this hard to cast? Do you find musicals particularly challenging to cast, or easier? 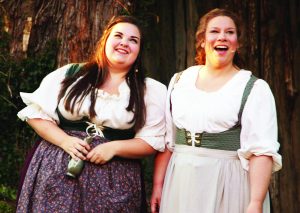 Elizabeth Meredith, left, as Meg Brockie and Sonya Steberl as Fiona MacLaren get their song on.

AB: “I was very impressed with the individuals who came out to auditions. Shauntina Phillips, the vocal coach and director and I had a great group of talented singers and actors to choose from, especially for the principal roles. There was a very limited number of adults who auditioned, but those that did were all cast in principal roles. We really needed strong singers to handle the very challenging music in this show  and believe we were richly blessed to have the right individuals audition. Auditioning and casting musicals is fairly difficult. As soon as actors hear that a show is a musical immediately jump to the conclusion that since they cannot sing, they won’t be cast. That is not always true. When I cast musicals, I look at auditions from the perspective of the characters. Sometimes, not being able to sing well fits a character’s personality and I will cast based on that fact. Actors do not have to have operatic voices to be cast. Most directors and musical directors can work with individuals to help them work through the music to make it their character’s, not the actor’s.”

AM: Tell us about the cast — any standouts or surprises?

AB: “I seem to get actors auditioning where one or two are from the same family. As an actor myself, I always enjoyed being in a show with my children. I try to make that happen for my casts as well. If there are several individuals from one family auditioning, I try to work them all into my show. We have a several family groups that have been cast. Three of which are principal characters. We have a couple new actors to the RECT stage who have grown into really great actors. It is hard to identify these individuals from the seasoned actors.”

AM: Will this appeal particularly to any group, in your opinion?

AB: “There are several tunes that will be familiar to older audience members, However, once the audiences hear the music, I know they will leave humming some of the great tunes. It is an older show, but as a middle-aged adult, the show has really grown on me. The more I hear the songs, the more the show grows on me. Anyone who believes in the miracle of love will very much enjoy this show. Once the audience gets into the show, it is very difficult to remember that Brigadoon is just a fantasy, but the events are true to life, even today.”

Matthew Curtis, a Centre College student and son of RECT’s former president, Judy Machal Curtis, not only sometimes functions as photographer for the theater, but created a promotional video which can be viewed at raggededgetheatre.org.