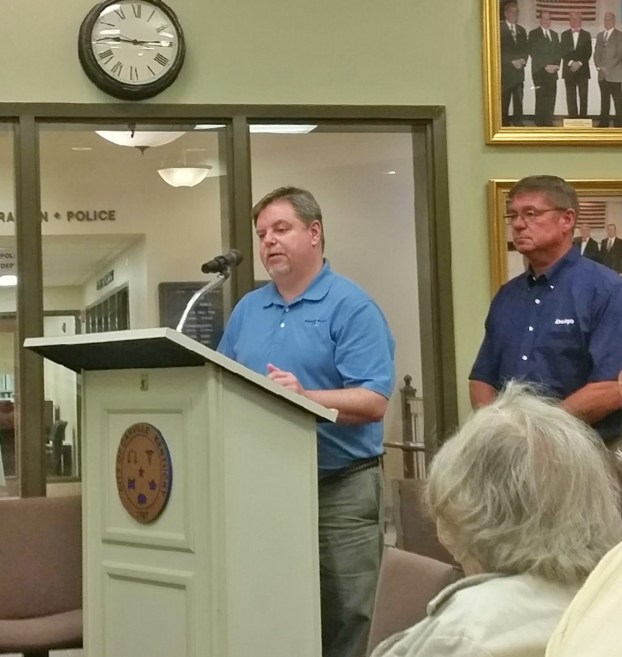 Kendra Peek/kendra.peek@amnews.com William Horton from Denham-Blythe, an engineering company from Lexington, speaks to the Danville-Boyle County Planning and Zoning on behalf of Denyo, while Joey Harris plant manager waits.

The Danville-Boyle County Planning and Zoning Commission has approved a plan from Denyo to potentially build an addition with a loading dock at their facility on Minor Road in Danville.

Joey Harris, plant manager for the Danville plant, said the plan is still in the very early stages and might not even come to fruition. It was presented to P&Z as the first step toward the process.

“I always like to go to the Planning and Zoning (Commission) first to give respect to the local officials,” Harris said. “There are a lot of maybes.”

Denyo is waiting for company approval to continue the process, which he said requires a lot of “leg work up front,” such as getting engineers, looking at the property, submitting the paperwork to officials and getting approval from the corporate office and the board of directors — before it can go to the state to be approved.

“A lot of times, it doesn’t go through,” he said. “Plant managers — we are always planning on these things, it’s just hard to get them to land.”

If the plan succeeds, a 73,280-square-foot manufacturing addition would be placed where the current dock is. Harris said the best-case scenario is there could be a ground breaking in October. Ideally, it would be in operation before the end of next year, he said. But all of that depends on getting the necessary approvals.

There’s a lot of contingencies that have to be approved,” Harris said. “It’s still ‘a maybe’ at this point.”

The plan was presented by William Horton from Denham-Blythe, an engineering firm from Lexington, which is working with Denyo on the potential project.

The Planning and Zoning Commission also approved a site plan for a four-plex to be built on War Admiral in Danville by JKB Holdings.

The Perryville City Council had second reading and approval on the 2017-2018 budget Tuesday night. The total proposed budget for the... read more