The Kiwanis Club of Danville is now a nonagenarian, marking March 1 as the 90-year anniversary of the local club’s formation.

“Ninety years is something worth celebrating,” said Kathy McBee, club member and former president times four. “There’s a lot of history to this club.”

McBee shared some of the club’s history since it was chartered on March 1, 1927, and the history of Kiwanis International, which was formed in 1915, initially as a business networking club. 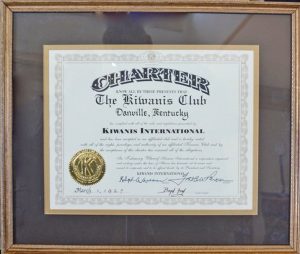 Photo submitted
The charter of the Kiwanis Club of Danville, formed on March 1, 1927.

The Kiwanis club has long been focused on helping children, and in the early years when the club was open only to men, the Danville club would taking young men in need out for a haircut, a warm bath and a nice set of clothing, McBee said, as part of the Christmas project.

The Danville club has hosted a variety of events to raise money or benefit the community, including a minstrel show, charity festival, dental clinic, a circus and more.

In the early 1990s, the club held a fish fry fundraiser at Weisiger Park in Danville, and would hold the Kiwanis Cookout during the Constitution Square Festival. That fundraiser was a big one for the club, McBee said.

After the end of the Constitution Square Festival, the club had to get more creative in fundraising, she said, as it made a big impact on their funds.

“Kiwanis, in Danville anyway, we have often felt like the little engine that could,” she said. “We’re smaller than we have been — at our peak, we probably had more than 100 members. Now we’re probably around 35. We had dropped below that a little bit.”

She said some of that had to do with the recession and companies pulling back from supporting community groups. McBee said the club’s “coffers” weren’t always as large as they wanted them to be, but the members were always willing to work to help those grow.

“We got the opportunity to do one of those test drives at Stuart Powell — that was wonderful,” she said.

Currently, they are now getting additional financial support from two local churches, and they have grown through increased membership, things that McBee calls “real blessings” for the club.

“We have tremendous fellowship in our group. I don’t ever dread going to a Kiwanis meeting,” she said.

The club meets the first four Thursdays of the month at the Danville Country Club at noon.

“Everyone is welcome to join us. As members, we’re always reaching out to folks, inviting guests, in hopes that they might consider joining,” McBee said.

There also information via their Facebook page. To join, new members must pay a one-time new member fee, and then every member pays the annual dues. A small portion of the money goes to Kiwanis International, she said, but the rest remains locally. Interested people can also email current President Philip Nichols via nicholsphilip3@gmail.com, or member Robert Cunningham at robertc@stuartpowell.com.

“Anyone who would be interested in becoming a part of the Kiwanis Club of Danville would need to have a heart and a passion for service,” McBee said. “That’s what it’s about, serving children in need.”

In more recent years, their focus has been on helping send children to the Salvation Army summer camp (10 this year), providing items for children going back to school, and helping with Salvation Army’s after school program.

“We do serve the most vulnerable population,” she said. “Sometimes we never hear … when you do, and we have, boy, it can getcha.”

McBee said they want to grow because they know what they’re doing makes a difference. That’s also why the group is willing to participate in events such as setting up as a food vendor last year for the Bourbon Chase, serving food through the night, until about 2 a.m.

“Those are hard hours. But when you know what you’re doing makes a difference in a child’s life, it’s worth it,” McBee said. “It’s a real passion … when you have an opportunity to be involved in a group that has the heart to serve those children, it’s a joy.”

McBee said they want to continue to increase the projects they are working on, to better serve the children in the community.

The project most recognizable, however, is the Christmas for Kids project, she said, which began in 1927 with the start of the club.

“For several decades, we have sponsored 25 children with new coats, shoes, clothing, undergarments, socks and small toys through this annual project,” she said.

The children, along with a teacher, parent or guardian, are invited to a Christmas party at the Danville County Club. There, everyone gets a kid-friendly lunch, sings Christmas Carols, gets to hear a reading of The Christmas Story and a presentation of gifts from Santa.

“This party is the culmination of our year and the project that we work the most in our fundraising efforts to support,” McBee said.

A future plan, McBee said, is to host a bluegill fishing tournament this fall, a brand new venture for the club.

“We are excited about that,” she said. “We’re hoping we’ll have a good turnout and it can be a very family-friendly event.”

Plans for that event will be announced sometime in July via the Kiwanis Club of Danville Facebook page.

“I’m very hopeful, optimistic and determined that we’ll make an announcement in July as to the win and where and the details,” McBee said.

The club is also chartering a Key Club at the Boyle County High School, which is focused on community service efforts, bringing back a club that had disbanded over the years. McBee said they were also in discussion about launching one at Danville High School.

“In its early years the Kiwanis Club of Danville sponsored a number of new adult Kiwanis Clubs within the region and new Key Clubs at Danville High School, Boyle County High School and Kentucky School for the Deaf,” she said. “Unfortunately, as the schools evolved and extra-curricular activities increased, the local Key Clubs diminished and eventually disbanded.” 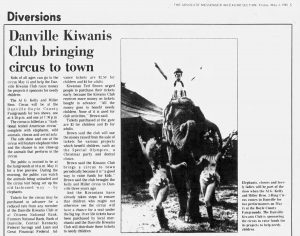 A May 3, 1985, clipping of The Advocate-Messenger highlights another Kiwanis Club of Danville event, a circus.

Owners could work on downtown buildings more easily under…