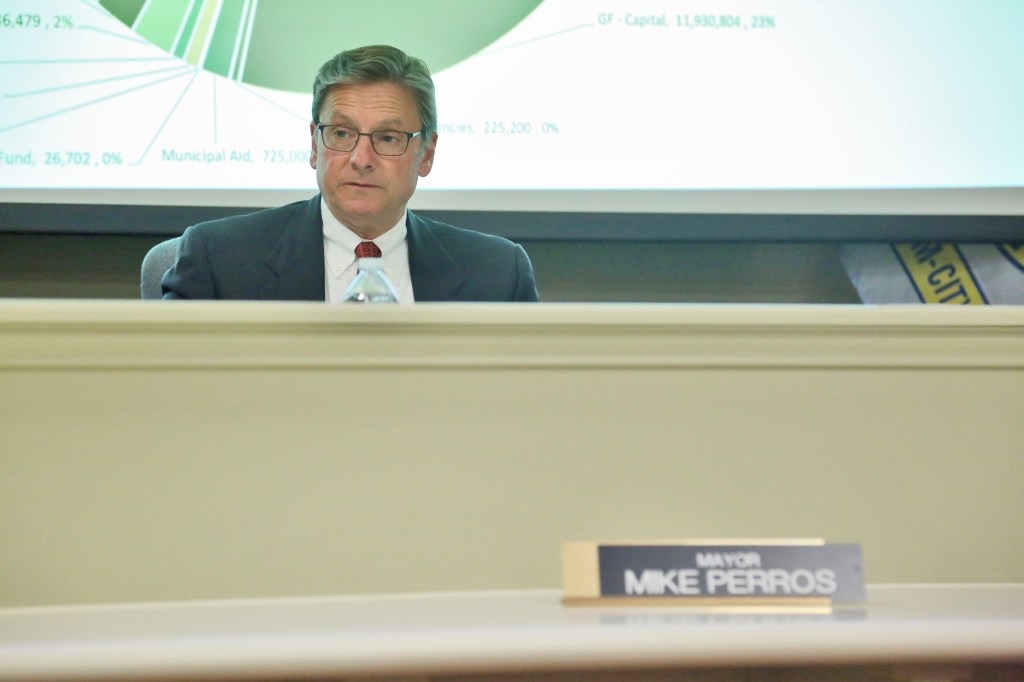 The Danville City Commission passed Monday a first reading of increases to the payroll and net profits taxes that would fund a new fire station and ladder truck; replace a deteriorating bridge; complete two downtown “streetscape” projects; and fund “emergency medical dispatch” 911 services, among other items.

The vote was 4-1, with Mayor Mike Perros and commissioners J.H. Atkins, Denise Terry and Rick Serres voting in favor and Commissioner Kevin Caudill voting against.

The tax increase ordinance, along with the city’s proposed 2017-18 budget, must still pass second readings — scheduled for the commission’s June 26 meeting — before they are fully enacted.

The ordinance would increase payroll taxes — taken as a percentage off of wages paid to workers — from 1.5 percent to 2 percent; and it would increase net profits taxes — taken from the profits made by businesses located in Danville — from 1.25 percent to 1.75 percent. Together, the increases would generate an estimated $1.9 million in new tax revenue in the coming fiscal year, and more than $2.5 million annually in the years after that.

The new $1.9 million represents about 3.6 percent of the approximately $52 million in expenditures planned in the 2017-18 budget.

The proposed tax increases would fund a long list of new spending items, including half a million in debt service annually so the city can replace the crumbling downtown fire station and a ladder truck that is more than 25 years old; implementation of 911 “emergency medical dispatch;” and additional funding for paving of city streets to replace a loss of state funding.

In the longer term, City Manager Ron Scott has said the addition of $2.5 million in annual revenue will cover necessary new expenditures in the next five fiscal years, including funding for potential park improvements in 2019-20 and funding to work on the city parking garage in 2021-22.

Prior to voting on the issue, commissioners heard from two members of the public — Chamber of Commerce Director Paula Fowler and realtor Mark Dexter, both of whom spoke against the increases. 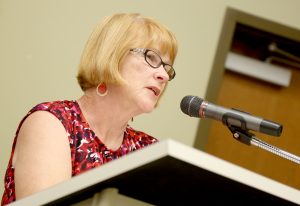 “To have 9 percent of my membership send me back comments and responses in eight hours and have 77 percent opposed really shows a lot of interest and a lot of concern about a tax raise,” she said.

“The increase in taxes will decrease the spending power of (employees’) wages and employers will be pressured to increase wages to cover a payroll tax increase. So a payroll tax increase actually acts as a pass-through on the employer, whether large or small,” she said. “This could become more of a pressure point for future business prospects.”

Fowler said it’s not been long enough since the last tax increases, which occurred two years ago.

“We don’t feel adding an additional $1.9 million in new taxes so soon after the last tax increase is reasonable,” she said. “The tax increases being adopted since 2015 are growing faster than our business community is seeing any kind of significant growth.”

Both Fowler and Dexter criticized the city’s initial plan to spend a maximum of $80,000 to hire a preservationist professional, who would help the city maintain its status as a “certified local government.”

“Most voters expect their elected mayor and commissioners to shift through the many requests for funding and determine priorities in order to use the available funds in the most prudent manner possible,” Dexter wrote in a letter he provided to the commission. “It is hoped that you will find ways to cut back on the proposed budget expenditures so that the proposed tax increase can either be avoided for now or greatly reduced. Several budget items come to mind.

“Number one is the $80,000 proposed for a preservation employee. This may be a good thing, but is it essential?”

Later in the meeting, Mayor Perros addressed concerns about the tax increases and defended their necessity.

The increases stem from a Feb. 3 “retreat” the city commission held, when it looked long-term at where Danville’s budget is and what kinds of expenses — especially capital expenses — are necessary to maintain quality of life, Perros said.

“We identified hard needs — not wants — in the total range between $30 million and $40 million,” he said, directing his comments to the audience. “This list is available to you any time you want to see it. We will gladly share it with you.”

Perros said the revenue streams the city has available are limited, with payroll taxes being the largest at around 60 percent of the city’s income. Meanwhile, the new costs are hard to ignore.

“This situation would be different if we didn’t need — not want — a safe fire station and a new hook-and-ladder truck. But as they say, it is what it is,” he said. “And these expenditures are central — they are central — to the main purpose of government and essential to providing a safe and livable community for businesses to operate.”

“Our time of need for our citizens is now. Not months from now, not years from now — it’s now,” he said.

Perros said he would welcome suggestions as to how the budget could be cut significantly enough to remove the need for new taxes.

“In my opinion, it’s easy for people to come in and say, ‘cut taxes.’ That’s easy,” he said. “I haven’t heard anybody say how.”

Perros asked the audience if they would be willing to tell police officers or firemen that they had to take a 10-percent pay cut, or if they would be in favor of cutting other relatively small expenses such as cemetery maintenance ($328,000), Code Enforcement ($468,000) or funding for the Community Arts Center ($78,000).

He added that the newest version of the city’s budget — the one that passed first reading — no longer includes funding for the preservationist position.

“But does that move the needle?” he asked. “No — that’s a gnat on this total situation.”

City Manager Scott then ran through a summary of the main budget points and further clarified the elimination of the preservationist position: He said the incoming Planning and Zoning director has proposed making the preservationist work required to be a CLG part of an expansion to a five-day work week for P&Z.

“I think we are inescapably where we need to be with this budget if we are going to address our realistic needs that we see,” Scott said. “If we are going to turn a blind eye to those and not, we can cut, we can delay, we can not address those. But my question is do you want to do that and is that action in the best short or long-term future for Danville’s citizens?”

Scott was critical of the results of the Chamber of Commerce survey, saying that a 9-percent response rate may not be representative and questioning the phrasing of the questions.

“I would ask if the question was framed correctly — if businesses had been asked ‘do you wish to pay a little bit more to continue to enjoy the quality of services provided or to address fire or other needs in the budget?’ — I bet you would have got a complete reversal on the results of that survey,” he said.

Commissioner Terry similarly noted that some responses to the survey included comments that they would be OK with a tax increase if it’s spent in certain ways.

“That is what we have laid out,” she said.

Terry also noted she would prefer not to allocate any additional funding to Planning and Zoning for expanding to five days a week because the city already contributes $10,000 more than Boyle County and the incoming director will be paid less than the retiring one; and she said she doesn’t think maintaining CLG status is worth the cost.

“Are we just holding onto that for prestige?,” she said. “… Unless there’s some more money coming down the pipeline, it’s really just not worth it. We’re going to continue our preservation efforts whether we are CLG-certified or not.” 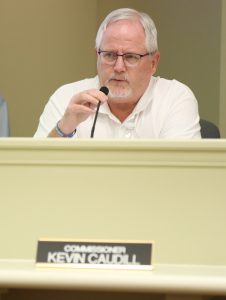 Danville City Commissioner Kevin Caudill explains his “struggle” with increasing taxes just two years after a previous tax increase during Monday night’s commission meeting. Caudill voted against the first readings of the city’s 2017-18 budget and an ordinance that would increase the payroll and net profits taxes.

Commissioner Caudill said he continues to “struggle” with the proposed tax increases.

“Are we going to price ourselves out of the market? I don’t know that we are or aren’t, but I think it’s something we need to consider,” he said.

Caudill said when the commission passed tax increases two years ago, “I kind of in my mind made a deal with the citizens of Danville that it would last longer than two or three years.”

“I think there’s a point where you can’t go back to the same well all the time,” he said. “… I guess I’m trying to get straight in my mind if we’ve done all we can getting up to this point. That’s what I’m struggling with.” 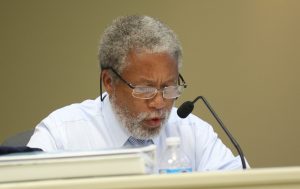 “When the mayor made his presentation, the tone appeared to be defensive. You may not have meant it that way, but it came across to the public that way,” she said.

Brown said she doesn’t believe any citizens question the need for a new fire station. And she took issue with Perros’ comments on the preservationist position.

“You said that the expenditure for that would be the size of a gnat on the budget, which we all understand,” she said. “I think the reason we picked that up is because that appears to be a non-essential service, a non-essential expenditure. So we’re wondering if that’s something we can see very easily … are there other things? So I believe we are using that as a symbol of things that could be eliminated from the budget.”

Toward the end of the meeting, Perros said he apologized to anyone in the room who took offense at his comments, “but i do not apologize for the comments, nor do I apologize for my delivery of them.”

“We’ve heard all the complaints, we’ve heard all the ‘cut taxes,’ but we haven’t heard any answers to this,” he said. “I have not had a single person come up to me and say, ‘I looked at the budget, I really think we ought to do X, Y or Z.

“… I made the comment two years ago at Danville Rotary that I would not raise taxes again in my tenure. And I’m going to have to eat those words sideways. So if anyone was offended by (my comments), I apologize, but I do not apologize for my message.”

Correction: A previous version of this story identified two streetscape projects as a major component of new expenditures funded by the tax increases. The larger of those two projects has now been removed from the proposed budget and can no longer be considered part of the planned new expenditures.