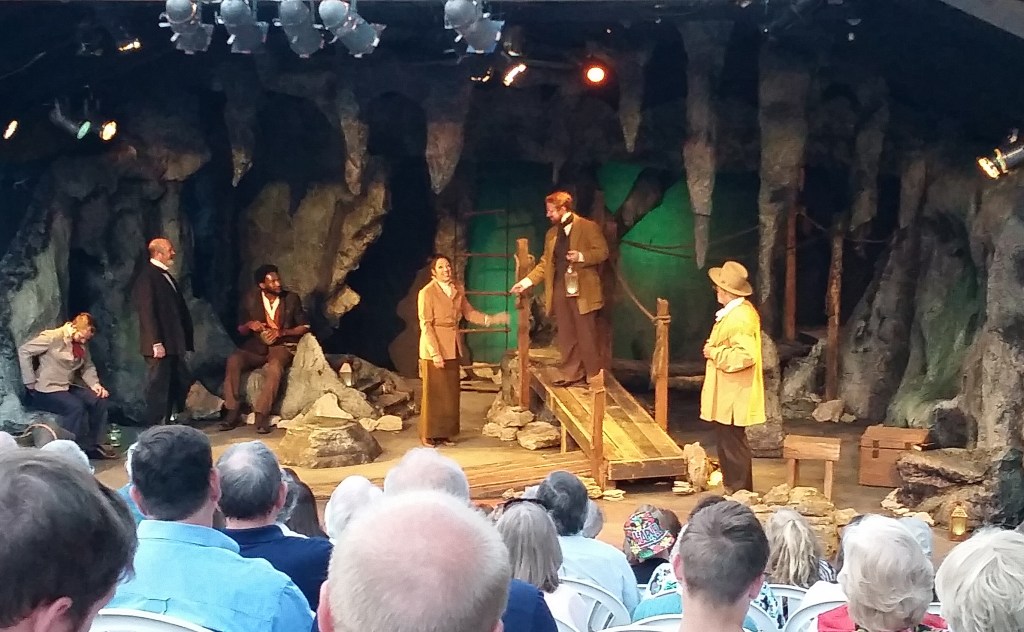 Amazing — and haunting at the same time

If you’ve never been on a tour of Mammoth Cave, it’s a truly fascinating experience. It’s eerie and beautiful at the same time; it will just as quickly haunt you as it will amaze you.

The same can be said for the first performance of Pioneer Playhouse’s 2017 season, “Death by Darkness.” The play is the first of two Kentucky Voices plays this year and is written by notable local playwright Elizabeth Orndorff.

“Death by Darkness” is set entirely inside Mammoth Cave, in a pre-Civil War Kentucky when outright slavery of black people was still ubiquitous. 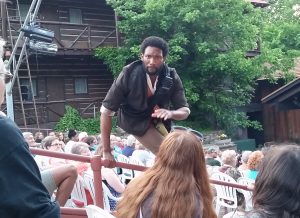 A slave who works as a cave guide, Stephen Bishop (Joshua Jerome), guides a small, eclectic band of tourists into the heart of the cave, the star chamber. That’s where personalities begin to clash and true identities are revealed. Before it’s over, there will be more than one death.

As the lights came up and the audience fell silent on opening night, a pair of bats circled in the air above, chasing down insects for their evening meal. It was a perfect accompaniment for the play that you wouldn’t get anywhere else but an outdoor theater.

“Death by Darkness” does a remarkable job of mimicking an actual cave in how the story flows. There are open, expansive scenes where the characters spread across the stage and light is shed on who they are; there are dark and confusing moments, when you’re not sure where things are headed; there a few scares that you don’t see coming.

The characters themselves are cave-like as well. As the play progresses and you learn more about each person’s motivations and history, you discover all kinds of hidden information and dark secrets. The second act takes you deeper into these caves of people than the first, as Orndorff’s clever writing reveals things forgotten in the past, much like a lantern in Mammoth Cave.

Tourist John Huffman (Liam McDermott) and southern preacher Horace Mallory (Robert Sean Parker) compete early on to see who can offend the audience more — Huffman with his insulting views of southerners or Mallory with his “Biblical” defense of slavery.

Those two stand out as main attractions in the first act, but it’s the slave tour guide Bishop with whom the audience casts its lots.

Jerome — a Centre College grad who performed in last year’s Kentucky Voices play, “Good Blues Tonight!” — performs impressive monologues as Bishop at the beginning and toward the end of the play. He imbues his character with honesty, simplicity and wisdom and earns his spot as the star of the play.

Bishop is based on a real-life person, who was a slave “renowned for his knowledge of the cave,” according to the theater.

There are eight actors in the play, but I hesitate to detail their roles and performances and spoil the surprises the play is built around. Suffice to say I was happy with the performances all around and didn’t think there were any noticeable weak spots.

This is the second time that “Death by Darkness” has been performed at Pioneer Playhouse — it premiered at the outdoor theater in July 2008, and was brought back this year by popular demand, according to the theater.

If you see the play on a Thursday, Friday or Saturday night, you can come early for a pre-show question-and-answer session with Orndorff.