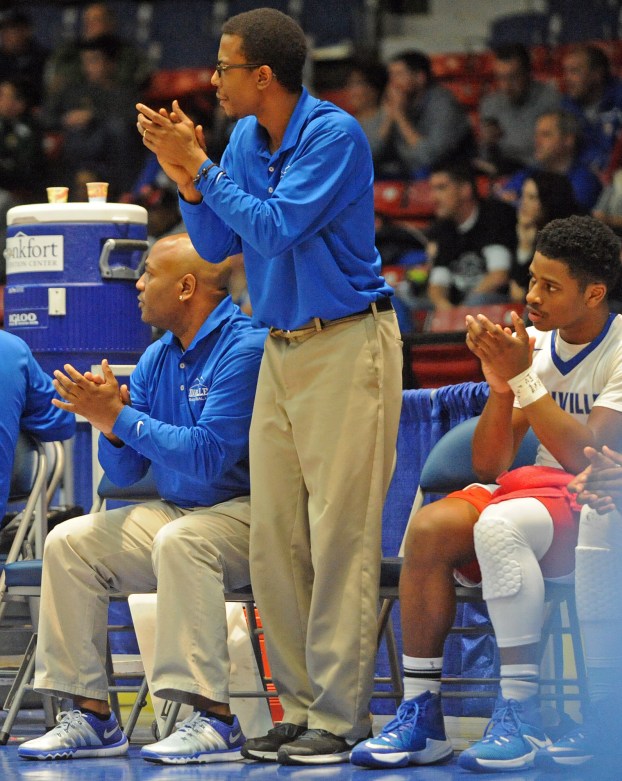 Clifford Berry didn’t take a traditional route to his first head coaching job, and that’s exactly why he believes he’ll be perfect for the job.

Berry was publicly introduced as the next coach of the Danville girls basketball program Thursday evening. A 1998 graduate of Danville, Berry not only got his first job as a head coach, but his dream job as well.

“It’s a dream come true, to be back in my hometown that I played in and graduated from,” Berry said. “I’ve been back here for the last few years as an assistant, but there’s nothing like being a head coach, having the guys say, ‘Hey, coach.’ It feels good to be back home and lead a group of girls I know already.”

After graduating from Danville, Berry went to Berea College to study and play basketball. He lasted through the first half of his sophomore year before an family illness brought him back to Danville.

It was Danville boys coach Ed McKinney who helped steer Berry back on track, bringing his former player onto his staff as an assistant coach.

“My mother ended up getting cancer and I came back,” Berry said. “It was a tough process getting back into that. I just ended up coming back home, working at home for a while, never really figuring out a direction.

“Ed pulled me up and got me going and motivated about coaching. That made me get back into my education. It’s been a long process, but I’m happy I learned a lot along the road.”

For Berry, his struggles after high school and the roundabout path he took in his life will help him lead and teach his players.

“I understand the tough parts about getting to college, not being prepared fully,” Berry said. “I can help a young high school kid be prepared when they go. That’s what I tell my wife all the time, sometimes I want to put my head down in shame, ‘Man, I should have done that right.’ Now I know I’m in the right position to help a kid learn and not make those mistakes.

This is the second time in three years Danville athletic director Lisa Fisher had to head up a search for a new girls basketball coach. She believes Berry’s background with the school helps make him the perfect for the job.

“That was a big factor for us, knowing he’s a Danville alum, his interest has always been at Danville and he’d be someone to stay with us,” Fisher said. “… We didn’t want to rush. We wanted to make sure we had the right fit for our kids and our program, and Clifford is definitely that person.”

When Berry got the opportunity to be an assistant coach for McKinney at his alma mater, he jumped in with both feet. He didn’t care if McKinney had him do the laundry, he wanted to show his commitment to coaching and the school.

Berry credits McKinney with getting him to this point in his life.

“He helped me tremendously, just as he did when I left high school,” Berry said. “He’s my mentor, getting me to college, helping me when I came back and wanting to learn how to coach, learn the ins and outs. He would throw me into some things and I would think, ‘Why in the world would you have me do this?’ Now, I understand it. I know it was all about helping me prepare to be a head coach.”

McKinney entrusted Berry with plenty of responsibilities, from going out on trips with the players and organizing those to doing that laundry. As Berry said, “It’s easy to do the Xs and Os, but to know the other side of it, that’s the tough side of it.”

But they do have one of the most talented players in the region back in junior guard Ivy Turner. She’s already topped the 1,000 point list for her career, and last year she averaged 19.6 points and 5.2 rebounds per game.

“I can’t lie, that was one of the big reasons to sign up for the job,” Berry said of Turner. “She makes a lot of things easy. She’s a really good point guard. She’s not selfish; she makes the players around her better. That will make it easier for me to help develop the younger talent I need to help her be successful. … It’s not going to be about one player, but she’s the key that’s going to get us through that door.”

There is plenty Berry must replace, though, and he’s wasting no time — the Ads will be in the gym Monday and are looking for summer games.

He’s spent time working with the Bate Middle School girls basketball program, so he’s already familiar with many of the younger players who’ll appear on the Danville roster.

“I have that relationship started with them already,” Berry said. “… The last couple of years, I’ve worked with some of the girls who have had varsity minutes.”

Berry replaces Michael Menifee, a fellow Danville grad who left after two years to take the girls job at Lexington Christian. Menifee won 34 games in his two seasons, including a pair of All-A region titles.

Menifee had followed Judy Mason, who won 146 games in eight seasons at Danville, including four 20-win seasons. Berry knows the tradition and talent is there to keep Danville girls basketball heading in the right direction.

“When I first started out in my high school career, it was in 1994 when Danville was at the absolute top of football, and I decided then I wasn’t playing football because I wanted to build Danville basketball,” Berry said. “That was my entire thinking and process then, and now as a head coach, that’s the only thing I’m thinking.