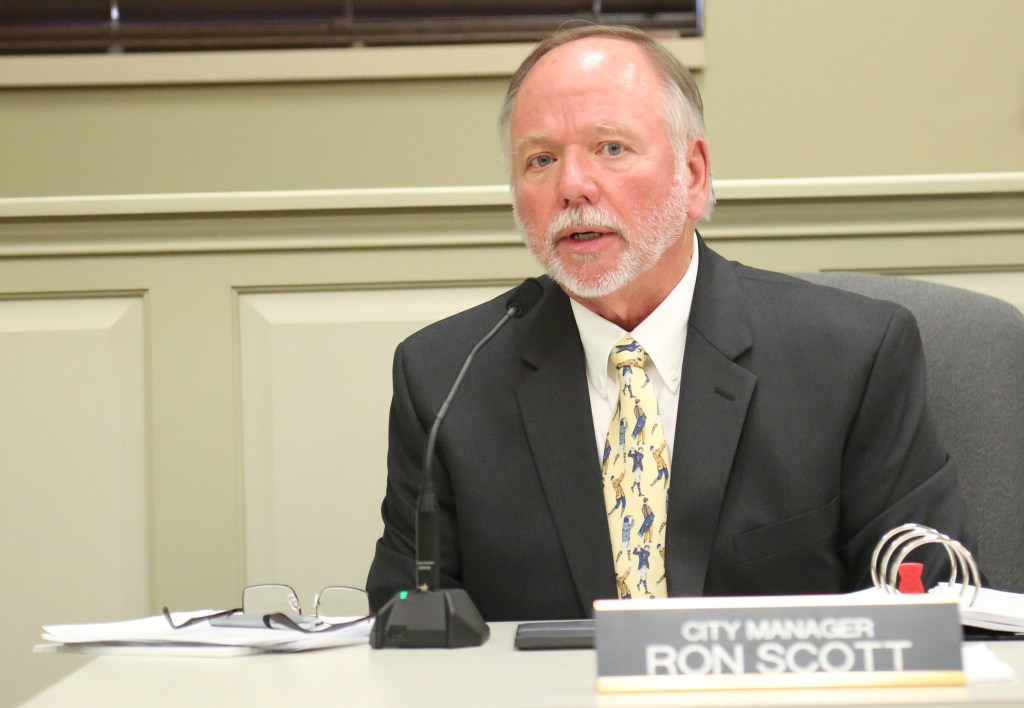 Ben Kleppinger/ben.kleppinger@amnews.com Danville City Manager Ron Scott speaks during Monday night’s city commission meeting. Scott confirmed Tuesday morning that Danville had been denied a large “streetscape” grant it had been pursuing to renovate the sidewalks, curbs and streetlights between Second and Fourth streets along Main Street. The city plans to eventually re-apply for the grant.

The City of Danville has been denied about $928,000 in grant funding for a downtown “streetscape” project. But the city manager says it plans to re-apply and seek the funding again.

The project would renovate sidewalks, curbs and streetlights from Second to Fourth streets along Main. Danville had planned to contribute a 20-percent match of $232,152 for the project, which was expected to cost around $1.16 million in all.

“Probably the biggest reason we did not get that one is because we already have an open grant,” City Manager Ron Scott said Tuesday morning.

The city was already approved for another streetscape project, which would renovate Main Street from Fourth to Fifth streets. That project, for which Danville was approved several years ago, has a budget of $350,000, with $84,250 coming from the general fund. The city is waiting on final approval from the state to advertise for bids on that project, Scott said. It could be a month or so until a bid is chosen and work can begin.

The city pursued funding for both streetscape projects through the Transportation Alternatives Program, a federal grant program that is managed by the states. Scott said having one TAP-funded program still in the works is why he thinks the city wasn’t approved for another one.

“I think there was nothing wrong with the grant application — in fact, it was an excellent example of teamwork,” he said. “… Our need is great, our application was great. I think it’s just the fact that we have one open.”

According to the city’s application for the Second-to-Fourth-streets grant, there have been 30 “sidewalk fall” incidents documented in downtown from 2013 to 2016.

“Since 2013, the City of Danville has paid over $51,000 in settlement claims from sidewalk falls and additional claims are still pending and have not yet been paid,” the application, filed in September of 2016, reads. “In addition to the obvious safety concern presented by these claims, the financial burden to the city and increases in liability insurance costs further dictate a dire need to ensure that all sidewalks and crosswalks are safe and devoid of trip hazards.”

The same application also cites the fact that five people have been struck by cars in the area since 2014.

Scott said the city was notified about a week ago that it had lost out on the grant. The current round of TAP grant awards were announced on June 2, according to a news release provided by Keith Buckhout with the Kentucky Transportation Cabinet’s Office of Public Affairs.

A little more than $13 million was awarded to 34 projects around Kentucky through the program. Buckhout said he couldn’t predict how much funding would be available in the next round.

“It’s hard to know what to expect or to accurately forecast potential transportation alternatives funding for next cycle because the current system uses a formula based on available funding from the Federal Highways Administration,” he said.

The Transportation Cabinet is not yet accepting applications for the next round of funding, but will send out a news release to cities and counties when it’s time to apply, Buckhout said.

In order to correct the pending 2017-18 city budget, Scott said streetscape funding was reduced and money was added instead to a “construction materials” line item in the public services budget.

The $484,250 that had been budgeted for streetscape matching funds was one of the biggest new expenditures identified by city officials as necessitating increases to payroll and net profits taxes.

Scott wrote in an email that the added funding in the construction materials line item is “for use either as: a) a match for the reapplication of the downtown TAP Grant Program next funding cycle, increased somewhat for inflation/higher costs a year later or b) if we don’t get the TAP Grant next funding cycle, potentially that … might be used to provide construction of ‘bump outs’ downtown.”

Scott added that another alternative would be to use some of the money for repairs to heavily traveled downtown sidewalks.

“We have had repeated requests to improve the sidewalk in front of the Subway and other buildings on Fourth Street on that side of the street, which do not have underground utilities,” Scott wrote. “The sidewalk is in bad condition. Possibly, replacement of this sidewalk … can be done prior to another TAP Grant submittal, or if not, included as a part of a future TAP Grant. It’s but one example of pressing need … when it comes to sidewalk new construction or repairs.”

Scott said the city plans to wait until the current Fourth-to-Fifth-streets streetscape project is complete before it re-applies for for the Second-to-Fourth-streets project, in order to ensure it doesn’t get denied again. If the city is ultimately unsuccessful in landing the streetscape grant, the work “may have to be done in stages” using city funds, because it’s needed either way, Scott said.

“Ideally, we’d like to get the streetscape grant, of course, and I think we have a good shot at doing so.”

Warrant issued for arrest of Mathes, man involved in…