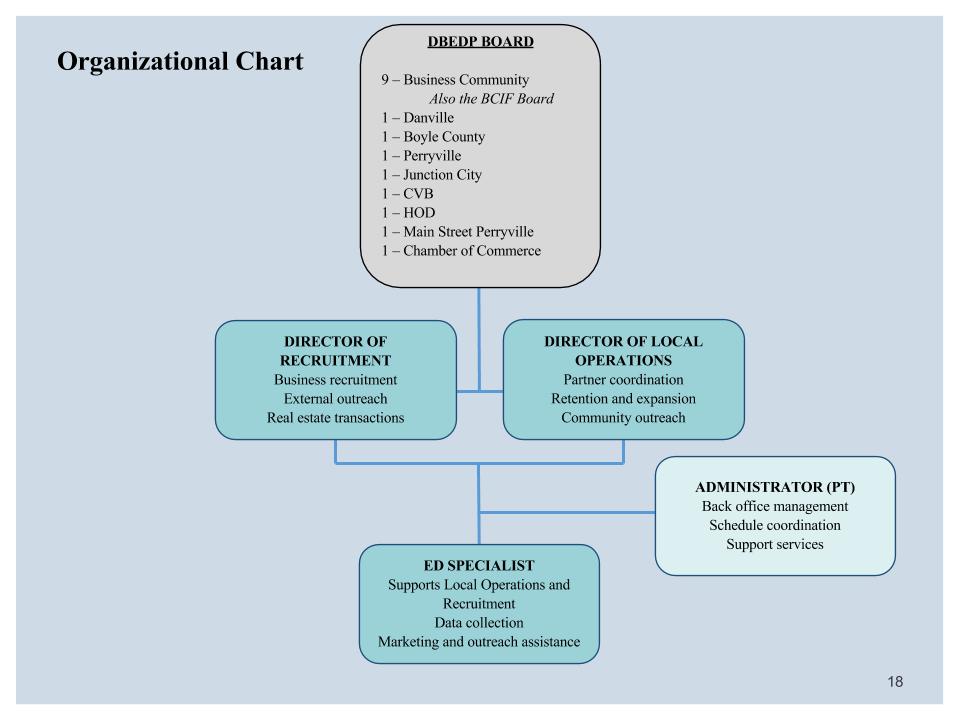 A slide from a draft Powerpoint presentation shows an early iteration of economic development consultant Kyle Talente's proposal for how the Economic Development Partnership could be reorganized. This proposal changed substantially before a modified version was released in late April. The newer version had increased representation for Danville and Boyle County, along with six seats for the Boyle County Industrial Foundation instead of nine.

The records, which are mainly emails between local officials and RKG consultant Kyle Talente, contained little that was surprising, but their contents may nonetheless illuminate some of the months-long process that resulted in the area’s strategic economic development plan, the final version of which is scheduled to be released this weekend.

One find was a preliminary presentation from Talente that detailed an earlier version of his idea to reorganize the EDP’s board.

The presentation was sent to EDP Chairman Ben Nelson, Boyle County Judge-Executive Harold McKinney, Danville Mayor Mike Perros and Danville City Manager Ron Scott on March 8. It contained a proposal for a reformatted EDP board more than a month before a different version of the idea would be presented to the public.

The early proposal listed a “DBEDP Board” of 17 voting members, nine of whom — a one-vote majority — would be from the “business community” and would also act as the board for the Boyle County Industrial Foundation. The other eight members would have been one each from Danville, Boyle County, Perryville, Junction City, the Convention and Visitors Bureau, the Heart of Danville, Main Street Perryville and the Chamber of Commerce.

On March 6, two days before Talente sent his early proposal, he asked the same four people — Scott, Perros, McKinney and Nelson — to schedule a time to discuss his ideas.

“As you will see, the draft reorganization structure requires the greatest adjustment from the Industrial Foundation,” Talente wrote. “As a result, I felt it most appropriate to gauge their willingness to adopt this new approach before bringing it to the larger working group.

“I spoke with John Albright and Greg Caudill (from the Industrial Foundation) last week to pitch my ideas of how the Industrial Foundation would have to reshape itself to fit within this draft structure. I heard this morning that they are open to my suggestions. So I am now moving onto ‘phase 2,’ which is a conversation with the public investors.”

Asked about the earlier version of the proposal, Nelson said Wednesday the document represents a “first testing-the-water version” of Talente’s proposal for reorganizing the EDP.

The proposal went first to the Industrial Foundation because if it wasn’t willing to consider Talente’s idea, the plan would be “kind of dead in the water,” Nelson said.

After the Industrial Foundation saw the proposal was when the email was sent to Perros and Scott with Danville and McKinney with Boyle County because those two “were the most affected” and Talente didn’t want them to feel “ambushed,” Nelson said.

Once they had seen the proposal, it was given to the larger EDP working group responsible for helping to develop the strategic plan.

From that point, discussions about a balance between private and public representation on the board continued and “the numbers began to change,” Nelson said, noting that the public partners gained more of a voice.

When the restructuring proposal was made public in late April, it included six seats for the Industrial Foundation, and three seats apiece for Danville and Boyle County.

Nelson said there’s been a continual effort from him and by the working group to find an equitable balance of representation on the board that will work for the community.

“For me, it’s been about trying to get to a better parity because so much of the tension you see in this community is” due to disagreements about where decision-making power should lie, he said.

Nelson said he knows there are members of the community who do not think the current balance is fair enough. He said the emailed document shows how thinking has been evolving as the working group tries to improve on plans and find something that will work.

On April 20, Magistrate Phil Sammons made public comments about his belief that EDP President and CEO Jody Lassiter had not performed as well as he wants.

“I’d have to give him probably an F on bringing other employment into Boyle County,” Sammons said during a meeting RKG to discuss the strategic plan. “He attends job fairs, but I’ve attended job fairs before and I think the biggest thing a job fair is is meeting people and having parties. I don’t think it’s ever produced anything. And I don’t know of any factories or anything that he’s brought in in the seven or eight years we’ve had him here, but he’s done a wonderful job with our present people, keeping them here and talking to them.”

A week after those comments were made, Nelson sent an email to EDP members, reviewing with them the proper methods for evaluating Lassiter’s performance.

In his most recent performance evaluation, Lassiter “was rated as meets expectations in his current role and he has consented that I share that with you,” Nelson wrote, adding that he is “not aware of any board member who advocates terminating Jody for poor performance.”

“While everyone has their own opinion, the partners should collectively understand and support the established formal performance process,” Nelson wrote. “That will best assure that the board’s authority is consistently upheld and help avoid potential employee relations liability for the partnership.”

“There has certainly been some public and some email comment about Mr. Lassiter’s performance when discussing the strategic plan,” Davenport wrote. “I suppose that some of the comments are ‘fair’ and some really are not.”

Nelson replied that he believes the EDP board “is going to have to take a clearer stand on Jody’s credibility going forward.”

“Part of the reason the ongoing criticism of his performance is both un-constructive and at times uninformed is it creates a never-ending narrative that undermines our community’s buy-in to intention economic development,” Nelson wrote. “Given that continuing narrative, it seems the EDP board has not forcefully endorsed Jody … or at least (not) forcefully enough to address the criticism. Given the chance to focus on what he does best, many folks believe that he has and will continue to prove his value. However, the board has to make that case for him and give him the chance to succeed.”

On March 23, about a week after a meeting between the EDP and Talente, Boyle County Magistrate Jack Hendricks sent an email to more than 80 people involved in the planning process, referencing a recent meeting.

“I have to tell you there was a lot of info in that meeting. Some good, some not so good in my opinion,” Hendricks wrote. “And some of it sounded like it was coming from a Washington, D.C., mentality.”

Hendricks noted Talente “waited until close to the end to say, ‘there is risk in many of these suggestions.’”

“That’s an understatement in my opinion,” Hendricks wrote. “Do you really think the voters of Boyle County would stand still for two and a half more people in Jody’s position? Do you really think we could sell using taxpayer dollars on such a risky venture as a 50,000-square-foot building, with nothing but a hope that someone would want it, same with pads set up for construction of building? These things would require millions of dollars to complete, much of it would be taxpayer dollars.”

Hendricks was likely referencing items in Talente’s proposals that suggest the EDP should work toward 3.5 full-time staff instead of the current one; and to build a “spec” building in order to attract businesses that want to start operations immediately.

“I totally understand what he’s saying about ‘investors,’ but everyone knows this would be a high-risk investment and I don’t believe for a minute you will find those folks willing to settle for 8 to 10 percent (maybe) profits five to 10 years down the road,” Hendricks wrote. “If we can find investors to step up, great, I’m all for that, but no way on this earth would I suggest we invest taxpayer dollars in such risky ventures.

“I invest, I have invested in real estate for years, as well as some risky business, like horse racing, but I’m doing that with my money, not someone else’s.”

Hendricks finished his email by saying he thinks there isn’t enough of a focus on workforce development.

“Until we do that, even if we landed one of those high-profile companies that would use a 50,000-square-foot building, we couldn’t furnish the workers they would need,” he wrote.

Jason Cullen replied to Hendricks that “while I agree that we do not need 2.5 Jody’s, I disagree with your notion that the Boyle County voters will not allow taxpayer dollars to be spent on risky ventures.”

“We taxpayers see the county continue to spend money on their top priority, the jail, instead of investing in things that would better the community like parks, pools, etc.,” Cullen wrote. “If the county really wanted to help workforce development, there would be a conversation regarding a vo-tech school in our community to help train our youth with some real skills that would encourage companies to choose Danville.”

“With all due respect, Jack, that mentality is exactly how we got in this position,” she wrote. “If we aren’t careful, we will die on the vine without even knowing until it is too late — I think that has already happened to an extent. We shouldn’t wait until we are desperate and take desperate measures. I believe this philosophy also applies to planning and expanding the parks as well.”

In order to obtain behind-the-scenes communications about the strategic planning process, The Advocate-Messenger filed open records requests with the EDP, the Convention and Visitors Bureau, the Heart of Danville, Main Street Perryville, the City of Danville and the Boyle County Fiscal Court, asking for all communications between representatives of the agencies with RKG from the date RKG was hired.

The EDP provided around 200 email chains including attachments in digital form on a pair of jump drives; Boyle County Fiscal Court provided dozens of pages of printed correspondence; and Danville allowed review of hundreds of pages of printed emails and documents. Responsive documents from the Heart of Danville, Main Street Perryville and the CVB were included within the EDP’s response.

Perryville Mayor Anne Sleet told The Advocate-Messenger she did not have any responsive documents to the open records request.

A review of the records obtained from other agencies shows many of the emails were sent to an email address for Sleet.

It took a little more than a month to obtain access and review all of the documents made available to the newspaper through the open records requests.

Work could begin on 311 West Main if permit…