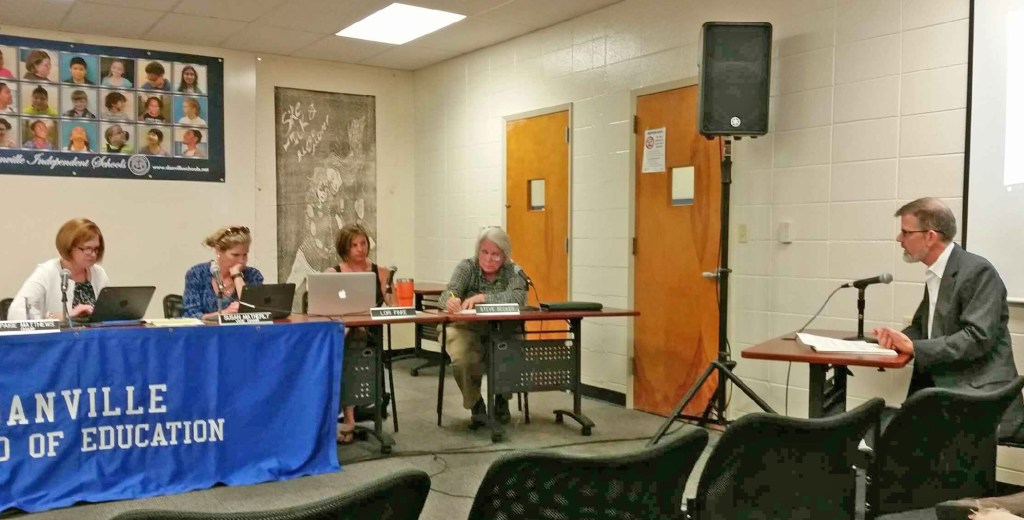 Kendra Peek/kendra.peek@amnews.com Steven Ward, with Studio Kremer Architects, speaks to the Danville Board of Education Monday night. Studio Kremer has been selected to work on the Hogsett Elementary renovation project.

Renovations to the Hogsett Elementary School are expected to cost about $5,345,000, according to a proposed budget document being sent to the Kentucky Department of Education Monday night’s Danville Board of Education meeting.

Superintendent Keith Look explained on Tuesday that the cost is what the board believes the district can afford at this point for the project.

Steven Ward, with Studio Kremer Architects presented the plan to the board Monday. According to the application, plans include:

• determining how to best use the existing media center or library space to best meet the needs of the preschool through first-grade students;

• renovating and potentially expanding the kitchen and figuring out how to reconfigure that space for younger children;

• adding additional support spaces for the Family Resource Center, custodial and administrative areas, resource rooms and other spaces as needed;

Ward said the timing of the project is still very tentative. Initially, he said, officials had put an “aggressive” draft schedule together based on their previous work. Monday, he said they believe that the construction might stretch across two summers.

“We will get some of the school leadership involved in late July,” he said to the board.

When school resumes in the fall, the plan will be to get some of the stakeholders — students, parents and teachers — involved in the process.

Ward believes the project will go out for bid in March and then construction could begin, which saves from having to manage construction during the school year.

“By pushing up the bids to March, we still have the aggressive construction schedule, but also have two summers,” he said.

Construction will not begin this year. While the building will be used by students throughout the construction project, Look said it is too early to predict when it will be complete.

Board members said they were excited to have Studio Kremer on board.

“You have big shoes to fill. RossTarrant has done an excellent job with Toliver,” said board member Steve Becker. “We wanted a different feel for this building. We’re dealing with the wee little ones … There’s so many possibilities.”

Work could begin on 311 West Main if permit…