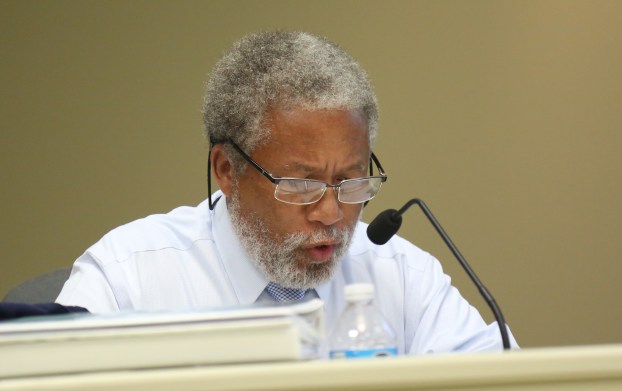 Work could begin on 311 West Main if permit issued

A building permit allowing work to begin on a condemned Main Street building could be issued this week.

Danville Building Inspector Rusty Cox is expected to tour 311 W. Main St. with the owners today in order to see their specific plans for the building, according to comments made by Code Enforcement Director Bridgette Lester and Danville City Manager Ron Scott on Monday.

“The building inspector can only issue a building permit when he has a clear scope of work,” Lester told members of the Danville City Commission. “(The owner’s) work must conform to the current building code.”

The building has been a repeated topic of discussion at city commission meetings since April, when the Architectural Heritage Board submitted a memo detailing five years of failed attempts to get the building repaired. The AHB asked the city commission to take action concerning the building before further deterioration could lead to not only collapse of 311 W. Main, but the possible need to demolish adjoining buildings as well.

The city initially asked for a plan of action from the owners, but the plan was not provided by the expected deadline. In late May, Scott told commissioners he had received a plan, but the owners had requested it be kept private. Scott and City Attorney Stephen Dexter agreed that was not possible — that the plan was a public record and part of an ongoing issue in the public eye.

At Monday’s meeting, a copy of the plan was provided in commissioners’ packets and given to The Advocate-Messenger.

The plan was sent May 18 by Ann Yager McCrosky, one of the owners. It lists some progress made earlier in the month, including turning power on and contacting Rumpke for a dumpster. It lists “next week plans” — which would have been the week of May 21-27 — of receiving a dumpster at the site and beginning to clean out the back of the building.

The plan also includes a list of nine items labeled “2017 & 2018 building plan,” including cleaning out the first floor of the building; shoring up and stabilizing the second and third floors; and replacing walls and windows.

Scott said items in the outline provided “were not terribly specific in terms of timeline.”

The next step will be for the city commission to again discuss the building after the city learns what happens during Cox’s walk-through, Scott said.

Commissioner J.H. Atkins asked whether the city has “the right to push for some estimated … timeline of completion” on the restoration of the building.

“I don’t know that I can give you a definitive answer on that,” Scott said. “It’s been quite a number of years with multiple owners and we haven’t produced that acceptable timeline yet, but I hope at this time we may. That’s all I can say at the present time.

“If you are unsatisfied with the specificity of the remediation plan, or the lack of progress in meeting that plan, you could do as the Architectural Heritage Board recommended and pursue the matter in court to levy civil fines against the owner of the building for non-compliance.”

Atkins said the outline the city has “looks promising.”

“But I don’t understand the degree of what it’s going to take to get the building back in use,” he said. “… If it takes two years for this to get back in service, what are we really getting out of this deal?”

“We need, at some point in the near future, a timeline,” Perros said. “It’s going to be done by when. Not cast in stone — we understand contractors that say they’ll be there one day and then got something else, we’ve got that — but we need something that says, ‘this is how this is going to proceed forward, and this is the timeline to do it.’”

The April letter from the AHB asks the city to take action because the building’s condemnation status placed it outside the AHB’s authority.

“There is evidence of mold, cracking of plaster/brick, bowing walls and structural instability on adjacent buildings, which lends to our concern that someday soon, we could potentially lose two or three significant buildings in our historic district, due to water damage from 311 W. Main St., if action is not taken immediately.

Atkins said he hopes the situation can be resolved so the city commission won’t have to keep discussing it. 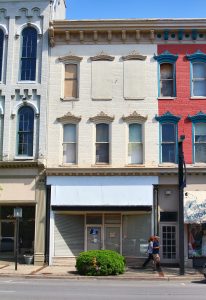 Ben Kleppinger/ben.kleppinger@amnews.com
The building at 311 W. Main St. in Danville has been condemned for years.

Jeffrey Spielman, 45, accused of murdering his 6-month-old daughter, pushed an oxygen tank as he walked through the Boyle County Circuit... read more