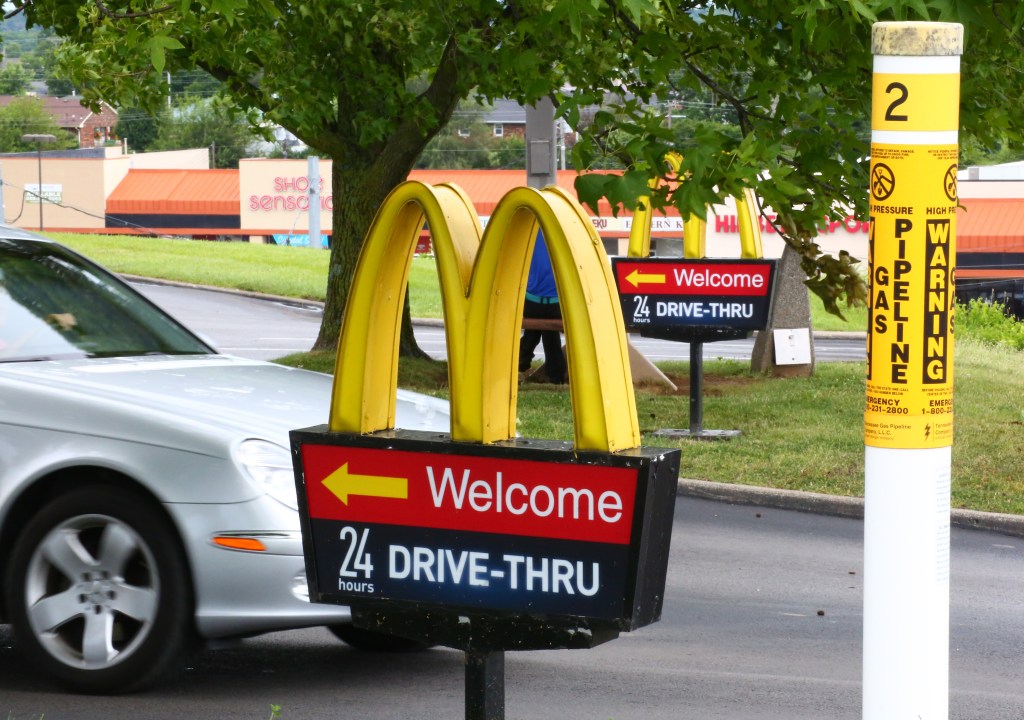 Ben Kleppinger/ben.kleppinger@amnews.com A high-pressure gas pipeline owned by Kinder Morgan runs underneath the McDonald’s property on Jane Trail in Danville, complicating the restaurant’s plans to construct a new building.

McDonald’s wants to rebuild one of its Danville restaurants, but a high-pressure gas line runs underneath the property, complicating the approval process. 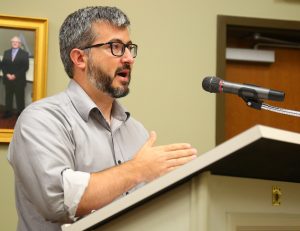 Ben Kleppinger/ben.kleppinger@amnews.com
GRW Engineers Project Manager Roderick Saylor explains the plans for a new McDonald’s building at the restaurant’s Jane Trail location to members of the Planning and Zoning Commission’s Board of Adjustments Thursday morning.

The new McDonald’s building on Jane Trail in front of Walmart would be flipped 180 degrees from the orientation of the current building, said Roderick Saylor, a project manager with Lexington-based GRW Engineers. The new building would be an example of the international restaurant chain’s newest architectural design, called a “Ribbon and Blade” building, Saylor told members of the Planning and Zoning Commission’s Board of Adjustments Thursday morning.

Before McDonald’s can pursue the standard construction permitting process for its plan, it has to get approval from the Board of Adjustments because the plan encroaches on a setback from where a high-pressure gas line runs underneath the property. That gas line is operated by energy giant Kinder Morgan, but is a different pipeline from the company’s much-debated Tennessee Gas Pipeline No. 1, which Kinder Morgan has been attempting to turn into a pipeline for fracking byproducts.

Planning and Zoning Director Paula Bary explained the situation at the meeting Thursday:

• At issue is a requirement for buildings to be set back from “easements” for pipelines by 25 feet on either side. That “setback” requirement was created in 2004.

• Different from setbacks are easements or right-of-ways that companies like Kinder Morgan own on their pipelines. People cannot build on top of these easements, in order to allow access to the pipeline underneath.

• The existing McDonald’s building was built long before the setback requirement was created, and so it is built partially within the setback, making it technically too close to the easement owned by Kinder Morgan if it were built today. The building does not encroach on the actual easement.

Bary said the setback rule provides “an additional buffer” on top of easements, in order to ensure there are no complications or additional problems “if there is something that goes on,” such as pipeline repairs or upgrades.

Complicating the situation further is an easement on the other side of the restaurant for Kentucky Utilities, which has power lines running through the area. There is no setback required from KU’s easement, but according to a blueprint provided by P&Z, the new building would be less than car’s width from KU’s easement in some places.

Saylor told Board of Adjustment members the proposed building encroaches on the setback by a little less than 23 feet. He didn’t have an exact measurement on the current building, but “it looks to be very roughly the same distance off of the easement.”

Kinder Morgan was represented by several people at the meeting. Greg Harbour, a damage prevention supervisor, told the board “our policy is to not let anybody excavate or build structures within our right-of-way.”

“I hate to say we want as much right-of-way as we can possibly get, but we need something to protect that critical zone,” Harbour said. “… McDonald’s has always worked with us very well in the past. They always contact us any time there’s work to be done in their parking lots and we’ve had a good relationship in the past, so I think that would continue.”

“I’m unclear — are you objecting to this? And if so, why?” Board of Adjustments member David Anderson asked. “… What are the problems and what’s your stance?”

Harbour said there are usually no problems as long as people who are building near high-pressure gas lines follow the rules.

“Our stance is essentially, we want to maintain and protect our current right-of-way.”

Anderson repeated his question, “are you objecting?”

“We are here to help you and support you if you feel you need to protect your setback. At the same time, we are here with GRW to help them do their work and construct the facility in a safe way,” Harbour said.

Board of Adjustments Chair Virgie Johnson eventually asked Harbour, “Will the proposed building be more safe, less safe or the same?”

“It will be the same,” Harbour said.

Scott Faulkner, operations supervisor for Kinder Morgan, said construction of a building so close to a high-pressure gas pipeline would require monitoring from the gas company. There’s also the risk of having to dig up McDonald’s parking lot and drive-thru if Kinder Morgan has to access its pipeline for repairs.

The blueprint of the proposed building shows while the building would not be in Kinder Morgan’s easement, the parking lot and a portion of the restaurant’s drive-thru lanes would be.

Faulkner said Kinder Morgan’s main concern is making sure nothing is built on its easement.

“You can imagine, if a building is in there and we have to dig up a pipeline, it’s going to be a problem — we’re going to have to move a building,” Faulkner said. “That’s why we try to maintain and keep everybody off of our right-of-way. The setback is just to help us out. It makes things a whole lot simpler.”

Bary eventually told board members, “I feel like you’re trying to get them to take a position and I don’t think they’re going to.”

“This 25-foot building setback line is not the Kinder Morgan easement,” she said. “I feel like they’re probably not going to take a position. I probably wouldn’t either.”

Faulkner and Harbour told board members the condition of the pipeline is not a concern and it would be unlikely that Kinder Morgan would ever need to come in and dig it up. The age of the line — it was installed in 1947 — is not a problem and Kinder Morgan uses devices called “intelligent pigs” through pipelines to determine what condition pipelines are in.

“The integrity of the pipe is the same as back when it was put in,” Harbour said.

“It seems as if we say no to this, then we will just still have the existing building, which is right there on the easement anyway,” Anderson said. “So the proximity to the easement isn’t going to change.”

Anderson said the two issues seem to be a potential problem for McDonald’s if Kinder Morgan needs to dig up its drive-thru; and the possibility of increased risks while construction of the new building is going on close to the high-pressure gas line.

Saylor said McDonald’s is fine with Kinder Morgan’s easement and the possibility of the drive-thru getting dug up if a problem occurs.

“McDonald’s would never have any objection to — if a repair needed to be done, if they needed to shut down, that is kind of the consequence of having a site with such a large easement on it,” Saylor said.

Harbour later noted the number of problems that occur with construction projects close to gas lines is “almost zero” when there’s been planning in advance and Kinder Morgan is aware of what’s going on.

Johnson said she thinks the Board of Adjustments needs to consider that McDonald’s is “not changing their footprint a lot, but our ordinance has changed since the original building was there.”

Board member Donna Fairchild said “apparently, those setbacks were established for a reason.”

“If we continue to change that or give exceptions, I’m not sure what the consequences of that are down the road,” Fairchild said.

The Board of Adjustments voted to table McDonald’s variance request until its July 20 meeting, and to have Bary produce “findings of fact” concerning the proposal, including specific numbers on the current setback encroachment.

If McDonald’s gains approval for the variance, Bary said the next step would be the “site plan review” phase.

Saylor said McDonald’s plans to pursue a standard construction schedule for the new restaurant if it clears the variance hurdle, but he did not provide a timeline of how long that might take.

Saylor said the existing McDonald’s building has been around since at least 1981. 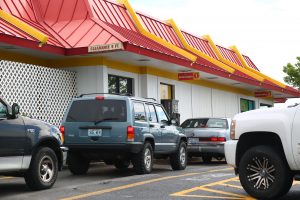 Ben Kleppinger/ben.kleppinger@amnews.com
The drive-thru at the Jane Trail McDonald’s would have a reversed flow if a new restaurant is constructed. The drive-thru lanes would also be on top of a high-pressure gas pipeline easement, meaning they could be dug up if the pipeline company needs to make repairs. 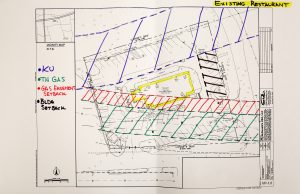 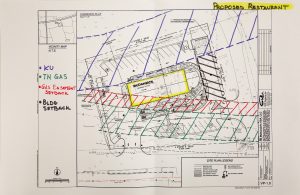 Cemetery clean up day for volunteers to be rescheduled,…