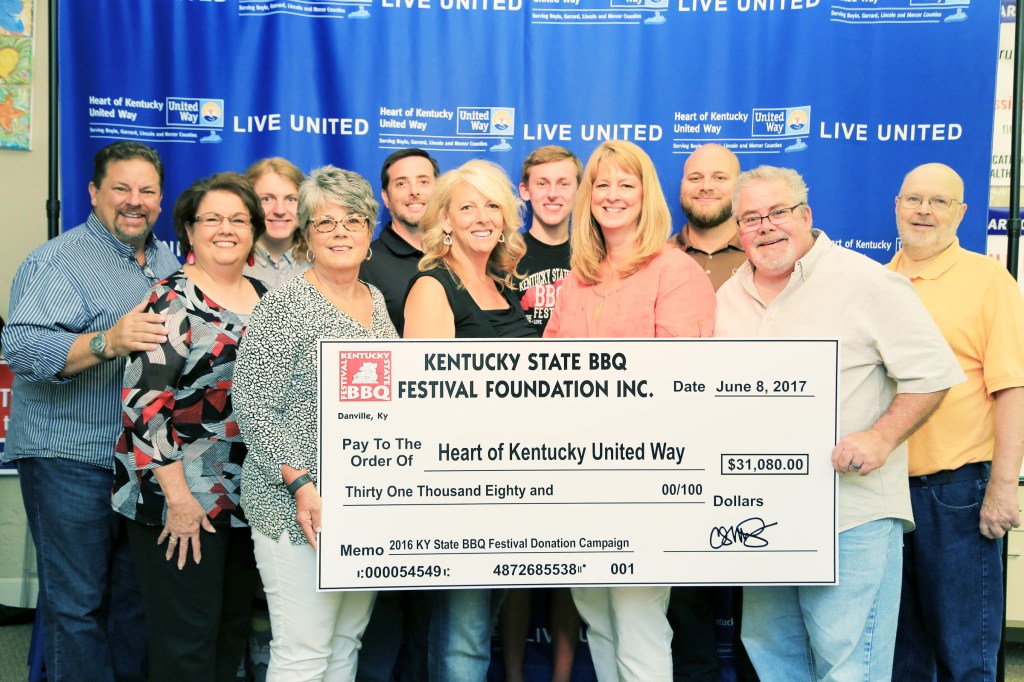 The Kentucky State BBQ Festival made its annual donation to the Heart of Kentucky United Way on Thursday, presenting the organization with a check for $31,080. Over the Danville festival’s six-year lifetime, it has now contributed almost $137,000 to the United Way.

“With the new location, we should be able to do even better this year,” said Brad Simmons, a lead organizer of the festival, referencing the festival’s planned move from downtown Danville to Wilderness Trail Distillery on the edge of town.

Simmons said when the BBQ Festival was first getting started, it approached the United Way for assistance with marketing and getting the attention of local people. The United Way, which supports a wide variety of local non-profit efforts to improve the community, has an extensive mailing list, which helped the festival get the word out.

“United Way took a chance on us,” Simmons said. “We came to them and we said, ‘we’d like to partner with a charity.’”

In its first year, Simmons said the festival gave the United Way $2,500. Why that amount? “We just really pulled it out of the air,” he said. “$2,500 — we figured we could at least write that check ourselves (if the festival failed).”

Far from failing, the festival has been a huge success and has grown each year. Organizer Cindy Simmons said each year, the festival board holds enough of its funds in reserve to run the festival again the next year, then gives the rest to the United Way. Every year, the donation has been bigger than the last, she said.

The BBQ Festival is regularly among the “top 20” corporate sponsors of the local United Way, said Brian Shannon, resource development director for the United Way.

“We’ve been able to get some great BBQ out of it, as well as some great publicity,” Shannon said.

“The Kentucky State BBQ Festival is a hero every day for our communities,” United Way Executive Director Stephanie Blevins said in a typed statement. “Because of their commitment to our communities through their generous donation to the Heart of Kentucky United Way, we are able to fund over 40 programs that help hundreds of children and families achieve their full potential and lead healthy, productive lives.”

The Kentucky State BBQ Festival is a non-profit organization that donates the majority of its proceeds to the Heart of the Kentucky United Way. It has also donated $7,800 to the Constitution Square Park Endowment Fund. This year’s festival will be held Sept. 8-10 at Wilderness Trail Distillery on Lebanon Road in Danville. To learn more about the Heart of Kentucky United Way, visit hkuw.org.