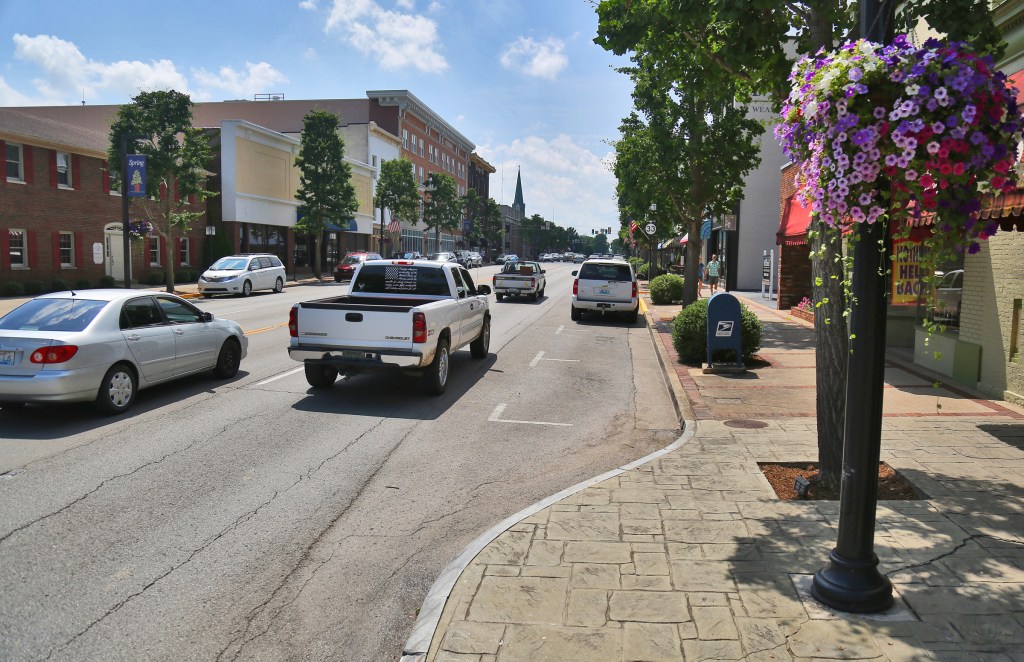 The controversial “road diet” proposal for downtown Danville may be coming back off the shelf sometime soon, according to a Boyle County magistrate.

Caywood declined to elaborate or talk further about his comments following the meeting.

Judge-Executive Harold McKinney said after the meeting that he was unaware of whatever plans Caywood seemed to know about.

The road diet — shorthand for a plan to take Main Street in Danville from four lanes to three — short-circuited tempers and led to bitter disputes among Danville leaders, residents and business owners back in 2014. In April of that year, the plan was unexpectedly canceled by the Kentucky Transportation Cabinet after months of heated discussions between various entities, including Danville City Commission and the EDP.

The plan would create one lane of traffic in each direction instead of the current two, with a single, shared turning lane in the center. It would potentially slow downtown traffic and create more possibilities for parking.

Natasha Lacy with District Seven of the Kentucky Transportation Cabinet told The Advocate-Messenger on Friday that “currently there is not (a) resurfacing project scheduled for Main Street in downtown Danville,” but a “pavement analysis will be performed this summer.”

“The analysis will be utilized in the fall to determine the needs and future paving project selections,” Lacy wrote in an email response to a request for information on any road diet or resurfacing projects planned for Danville. “The highway department will meet with local officials prior to scheduling a resurfacing project … discussion will be revisited about how to best utilize the available pavement area in order to address traffic, pedestrian and parking concerns … at this time, no discussions have taken place concerning a Main Street resurfacing project.”

Danville City Manager Ron Scott said he has not had any communication from the Transportation Cabinet concerning bringing back the road diet plan, but “that doesn’t mean it wouldn’t be possible in the future.”

“It’s not a secret that (the Transportation Cabinet) has implemented lane reduction strategies in many communities to make downtowns safer,” Scott said. “I think that remains their primary approach to improving safety issues.”

Because there are concerns with safety in downtown Danville, “it wouldn’t be surprising” if the road diet is what the Transportation Cabinet proposes, Scott said.

“That is how they traditionally have implemented safety improvements,” he said. “… I think we need to be open-minded and creative as we try to address downtown safety issues and have a good discussion on it when that opportunity presents itself.”

Danville City Engineer Earl Coffey said he also hasn’t heard of any work planned or been contacted by the Transportation Cabinet concerning a road diet.

Scott said he has heard from “one or more businesses downtown” that while they were opposed to the road diet last time, “they might be more open to (it) this time around because they see the need for more parking downtown.”

Scott noted the area’s strategic economic development plan set to be released this month will include recommendations for making downtown Danville “more hospitable” and making it possible for more people to live downtown on the second floors of buildings. Accomplishing that would similarly require looking at how to improve parking and safety, he explained.

“These discussions may come sometime in the coming months; I’m just not aware of any discussion that’s planned to occur,” he said.