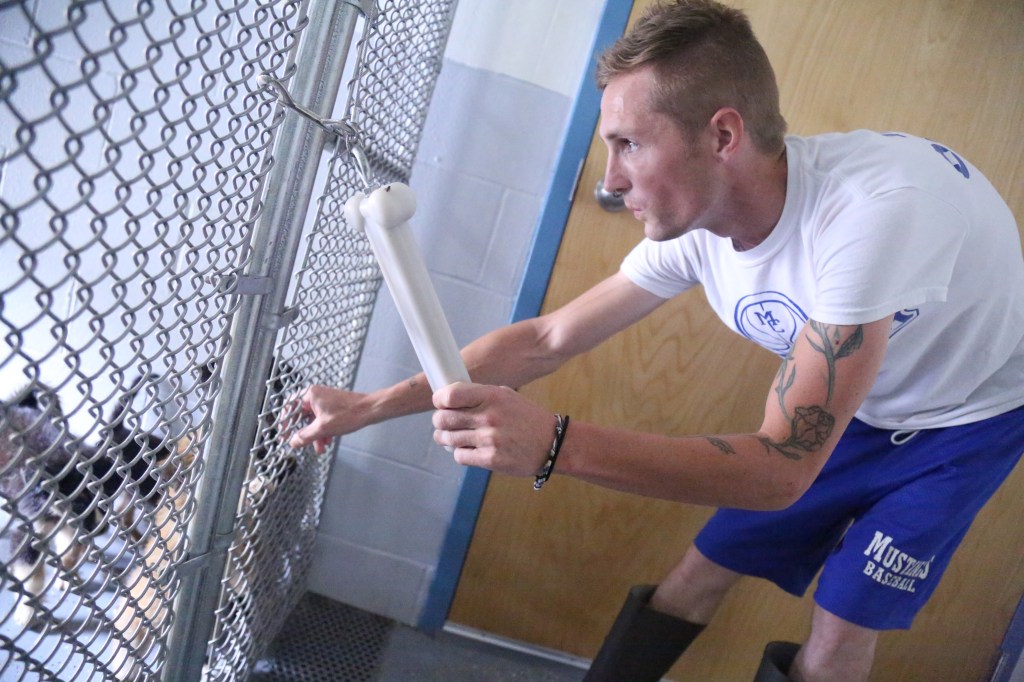 Ben Kleppinger/ben.kleppinger@amnews.com Justin Morgan attracts puppies to the front of a kennel as he lowers a gate to the outside dog run.

If you ask Justin Morgan what it is he likes about working at the Danville-Boyle County Humane Society animal shelter, he’ll tell you it’s because he relates to the situation the dogs are in.

“I know what it is to be a stray,” he said. “This isn’t exactly jail — this is a really nice animal shelter here, but dogs get locked away and nobody really pays a lot of attention to them. … At least every other day, I’ll have every one of them out, walking them, just trying to show them some love, because — you know, it’s not the greatest spot for an animal to be in a shelter. They want to be in a home, running around with somebody.

“I don’t know — it just feels good to show a dog some love.” 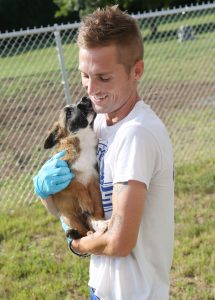 Ben Kleppinger/ben.kleppinger@amnews.com
A puppy licks Justin Morgan’s face as he carries it outside the Katherine E. Nelsen Adoption Center Wednesday.

Morgan mentions jail because he’s served time in the Boyle County Detention Center on more than one occasion, for issues stemming from an addiction to opioid pain relievers. But now, he’s seen as an early success story for a new outpatient treatment program available to Boyle and Mercer inmates at the jail.

On Tuesday, Boyle County magistrates gave Morgan a standing ovation after approving him as the newest permanent employee at the humane society. Morgan began volunteering at the shelter through the outpatient treatment program, which is run by Shepherd’s House out of a South Third Street building in Danville.

When the position at the shelter came available, Morgan applied and got the job. According to officials, obtaining employment is one of the main goals of the outpatient program, which allows eligible inmates to be released from jail while they participate. 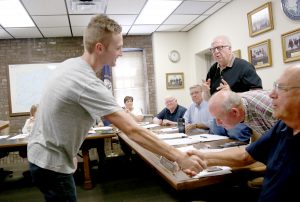 “Young man, good for you. We support you,” Judge-Executive Harold McKinney told Morgan Tuesday. “In some ways, you’re a trailblazer for us.”

Morgan said he is one of the first 20 inmates who began participating in the Shepherd’s House program in late February.

“None of us knew really what to expect. And they (Shepherd’s House) have kind of grown with us as we’ve gone along,” Morgan said. “They had an idea of how it was going to go, but the people who are running it are new to it— this is a new thing.”

From quarterback to addict

Morgan had a level of celebrity in high school — he was the quarterback for the 2006 Mercer County Titans football team that went 15-0 and won the state championship. After high school, Morgan, a talented multi-sport athlete, signed to play baseball with Birmingham-Southern College. But opiate drugs had already entered into his life before either of those milestones.

“Before I left high school, probably like my junior year, I had gotten into opiates and then from then on, just kept doing them,” he said. “I wound up quitting baseball, quitting school. I got cancer when I was 20; I got prescribed a whole bunch more opiates and I was off and running.”

Morgan told magistrates he believes without the Shepherd’s House program, he wouldn’t have been able to clean up his act the way he has. He told The Advocate-Messenger on Wednesday he doesn’t believe a different option that used to exist for getting out of jail — monitoring through Kentucky Alternative Programs — was very helpful.

“The thing about KAP was when they release you from jail, you have no job, more than likely no money. I know when I was in jail, I lost my job, I lost all my money, everything was gone. And then they immediately start you on drug screens that you have to pay $27 a week for. They just kind of release you and say, ‘good luck,’” he said, explaining that random drug tests would regularly pull him away from working. “… I worked at Toyota in Georgetown. I would have to drive to Danville, so I was missing work constantly and I had to come up with the money for drug screens. If you can’t pay for it … you go back to jail, more than likely. Fail one and you go back to jail. You can’t release an addict out for six months after sitting in jail and say, ‘hey, fail one drug test and you’re going to do your time and probably six more months because we’re going to hit you with contempt.’”

The Shepherd’s House program is staffed by people who understand the situations addicts can be in and know what it takes to get better, Morgan said.

“There’s been people that have failed drug screens … but they don’t immediately just bury them back in jail,” he said. “They work with them to figure out what’s going on, how they can help and how they can stop doing it again. One slip-up isn’t the end of your life like it was before.”

Morgan said when he started in the Shepherd’s House program, he would volunteer at a food bank.

Then, “(Boyle County Animal Control Director) Dan (Turcea) called up to the Shepherd’s House, saying they needed some help, and I was there in class,” he said. “I was like, ‘yeah, I’m all about it — I love animals.’”

He said the job isn’t exactly what he expected.

“I love animals but I didn’t know a lot about caring for them, as far as … trying to tell if they’re sick, this and that. It’s been a lot of learning on the fly,” he said. “… There’s so many animals that come through here that it gets overwhelming sometimes … I thought it was going to be cleaning up and sticking them back in there. But there’s a lot more to it than that.” 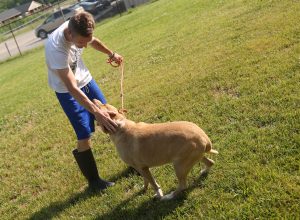 Morgan volunteered for a few weeks before he was allowed to start taking dogs on walks. A while after that, he was told about the open, part-time position.

“Essentially, I do the same exact thing now that I was doing volunteering, but now I’m getting paid for it,” he said. “Either way, I would do it. But it’s nice to get paid for it.”

If everything goes according to plan, Morgan will graduate from the Shepherd’s House program six months after he began, on Aug. 27. The program lasts six to nine months for participants, depending on the progress they make, Morgan said.

Graduating is his main goal right now — other things can come later.

“I can’t think too far out because for the past two or three years, it’s been out six months, in jail six months, out three months, in jail seven months — it’s been a roller coaster,” he said. “Right now, I just want to complete the Shepherd’s House and then hopefully I can get full-time here, get an apartment — all those normal things I should have done a long time ago.”