Centre Coach continues to recover, thankful to ‘heroic’ students who jumped into action 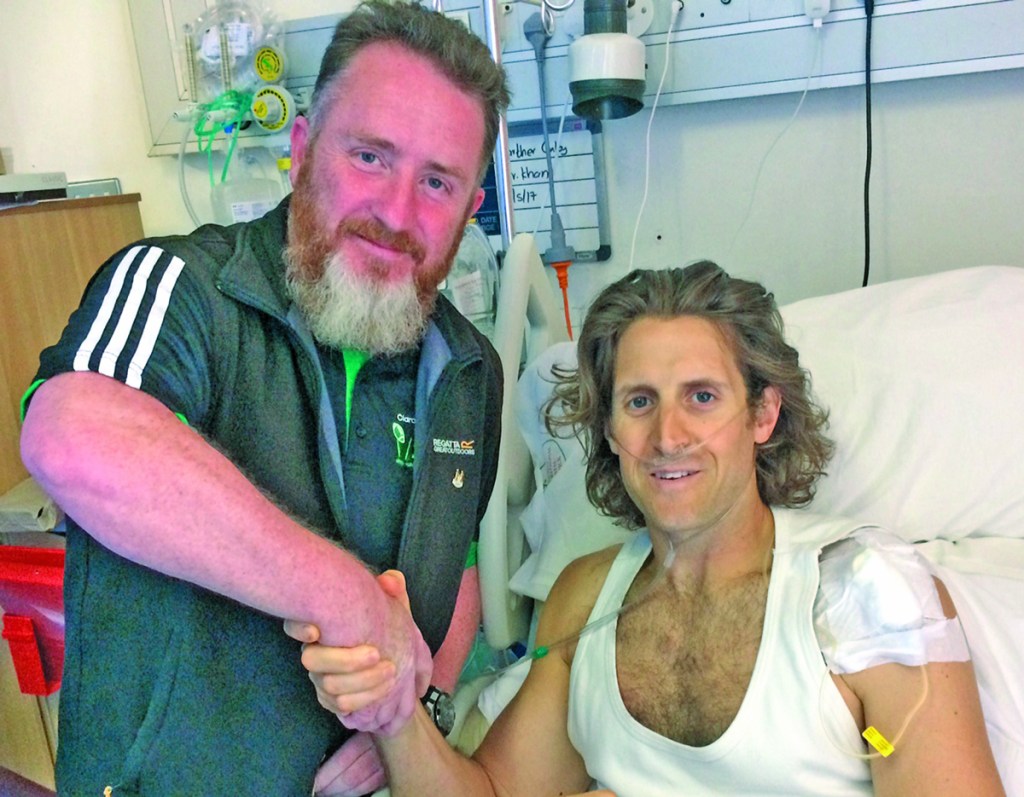 “Everyone totally freaks out when they hear that I fell from the Cliffs of Moher, because plain and simply, people just don’t live when that happens,” said Centre College Football Coach Carter Conley, via email from his hospital bed in Limerick, Ireland, just over two weeks after falling 20 feet while on a team trip to the country.

In fact, he shared, the 700-foot Cliffs of Moher are well-known in the region as a place where suicides are often committed and have a running tally of deaths. 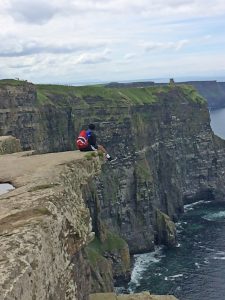 Photo submitted
Cliffs of Moher from the top. It’s a 700-foot drop to the shoreline below.

“Just being at the top takes your breath away. It is an amazingly beautiful wonder of the world, just incredibly vast,” Conley said.

It was there, from a path on the side of those cliffs, that Conley and a student athlete fell while hiking with two other students down a half-mile trail, known locally as the goat trail, to the base of the cliffs on May 31.

Conley said it happened as they neared the bottom, where they could see a good view of the shore. He stepped of the trail and then began sliding.

“Once the sliding started there was no stopping — I knew it was time to brace for the final 20 or so feet descent to the shore. That doesn’t sound like a great height, but as I gauged the situation, it was apparent that there was just no good way to manipulate the landing.”

As he neared the shore, he said, it became more apparent that what looked like small pebbles from the top were boulders, and much bigger than their initial appearance. The landing was not an easy one.

“As my left fibula and tibia snapped on contact, the bones shot through the side of my leg, and I fell back into the rocks breaking nine ribs, three of them in more than one place … I lost consciousness briefly because I did not realize that one of our players stepped over to check on me at which point he slid in the same manner and landed on the rocks close by,” Conley said. 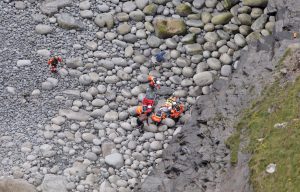 Photo submitted
Cliffs of Moher at bottom, the site where Carter Conley, assistant football coach at Centre College, and one of his players landed after falling 20 feet.

The student athlete, whose name has not been released, injured an ankle, his nose and his hip.

“We both quickly registered what had happened and acknowledged to one another that things would be OK,” Conley said. “I felt extremely closely connected to him, being in the face of real adversity, knowing we would do anything to help each other.”

By this time the other two students, Colin Burnam, a rising junior from Bowling Green, and Cal Lewellyn, a rising sophomore from Louisville, had reached the bottom via the path, and “without hesitation, jumped into the role of true heroes.”

That’s who Conley said it’s important to recognize in all of this.

“In fact, the sole reason I agreed to this interview is because I feel so strongly about celebrating the actions of these young men … Both stepped up and made a bigger, more heroic play than any of their amazing feats on the field,” he said.

Conley said their actions took courage, which is something the team emphasizes under the guidance of Head Coach Andy Frye, who maintains the importance of courage.

“All other virtues hinge upon courage. It takes courage to be honest, kind … We make clear to our players that courage is not the absence of fear, rather the absence of self,” Conley said. “Colin Burnam, and Cal Lewellyn both acted out of selflessness as they were assertive and totally devoted to the aid of their family. I’m not surprised by their actions, but I also could not be more proud.

“The composure and fortitude they displayed in the face of adversity is such a powerful lesson of virtue that will make our entire team better men. All along, Colin and Cal displayed compassion and reassurance which was incredibly important at the time.”

Looking back, Conley said, the rescue efforts following the accident were “nothing short of miraculous.”

“Colin Burnam, like the rest of the people visiting the Cliffs that day, had zero cell phone reception the entire time we were there, yet as he rushed to the rescue at the bottom of the cliffs, he was able to (get cell reception and) contact the coast guard, flag down a ship in the sea, and coordinate with emergency evacuation helicopters to organize our transportation to emergency treatment,” he said. “(Burnam) and Cal did an amazing job in a situation where many of us would have understandably panicked and frozen.” 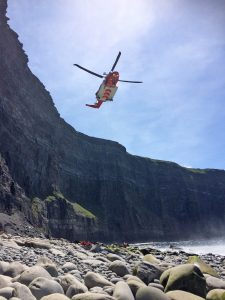 Photo submitted
The helicopter and emergency crews coming in to rescue Conley and his player.

Burnam wasn’t even stopped at the sight of the injuries, which included Conley’s leg being held together by a T-shirt.

“Without skipping a beat he made sure I was OK and proceeded to heroically coordinate the rescue effort and see us both safely hoisted into the rescue choppers above,” Carter said. “It was intense! I can’t say enough about Colin and Cal. I think they deserve all the credit in the world for turning a potential tragedy into a very positive outcome. Simply put, it is nice to know we still have modern day heroes.”

Recovering from the fall

The student athlete who fell has already been able to return home, but Conley is still recuperating in Ireland.

“With his incredible work ethic and positive attitude, I’m confident that (the student) will make a full and speedy recovery. No matter what, he will be a great leader for our team again this season,” Conley said. 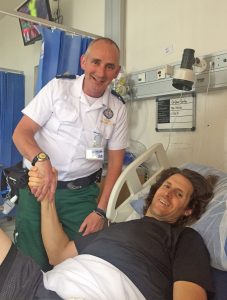 Initially, Conley said he was only concerned about that player, but that young man has taught him something in all of this.

“I was responsible for him, and as you can imagine, my heart completely rips apart for him. However, as I beat myself up about his injury, I have been quickly called into check by this mature young man,” he said. “He has reminded me of the wastefulness of anxiety and worry. Through our incredibly transparent and even raw life conversations we’ve had with each other over the years, I have constantly been reminded by this young man about the big picture perspective.

“This incredible young man and his faithful courage have helped me regain perspective on what is most important — why we are here: to serve others — and we can’t wait to do that together this season.”

Before leaving Ireland, the player and his family visited Conley, and brought him a fan for his room.

“Constantly thinking of others, even during their own trials and tribulations — what a strong message of selfless courage,” he said. “He, along with his heroic teammates, Colin and Cal, and the countless people who have shown amazing love and support make this story one of blessings and hope. I will forever embrace the telling of this story — the likely tragedy that turned into a feel good story that made everyone involved stronger and more hopeful!”

The coach still has a way to go toward recovery.

“I was supposed to fly home earlier in the week, but a new chest X-ray was presented that showed a slight pneumothorax remaining,” he said. He can’t fly in that condition, so he remains in Limerick.

He will also have to remain off of his right leg for six weeks and his left leg for 12 weeks, so Conley has been using a wheelchair while at the hospital. But he said he’s already back at work, recruiting from the hospital room. He’s also attending staff meetings via video teleconference.

“The staff here has been incredible and I am progressing every day,” Conley said. “They even bring Holy Communion to my room each day. I’ve been amazed at how nice everyone has been. My physical therapy has gone really well and I plan to be home very soon.”

Conley’s wife Christina, a pediatric nurse practitioner at the University of Kentucky Children’s Hospital, and his father-in-law, Tom Knox, had been at the hospital in Limerick, helping in the early phase.

“(Christina) has been phenomenal through all of this. I can’t say enough about her,” Conley said, adding that Knox had been helping with the insurance logistics while there.

They returned home last week, his wife to their Lexington home and their three children — Ella Jane, 5; Patrick Carter III, 3; and Kathryn Rose, 1.

Conley’s own parents, Patrick and Laura, flew over to be with him.

“They’ve taken this hospital and surrounding towns by storm, making friends fast and creating great memories despite the circumstances,” Conley said. “My dad has wheeled me around and taken me to the chapel here several times.”

Conley is also receiving a slew of visitors from across Ireland, from local coaches and players to emergency personnel who helped get him to the hospital. One man, “Graham,” even went to the airport to pick up Carter’s wife.

A ‘savage’ trip to Ireland

Conley said the trip had been a great one prior to the accident.

“The trip has been, as the young people say here in Ireland, ‘savage,’ which would be the equivalent of awesome. First and foremost, it was great to see our players, coaches, staff, families and supporters come together and form even tighter bonds in such a unique way. I’m sure I can speak for everyone when I saw how thankful we are for the opportunity to deepen our relationships and represent Centre and each other vs. the Belfast Trojans and just as ambassadors in Ireland and Northern Ireland in general,” Conley said. “The efforts of Andy Frye and the college and all of the alumni support along with Debbie Sebastian and her office made this overseas contest truly remarkable. It was such a special experience.” 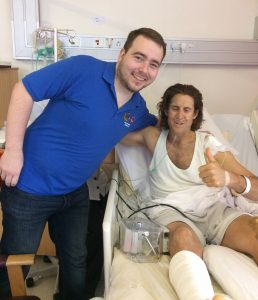 Despite what happened on May 31, the rest of the trip has been “phenomenal” for Conley.

“The people have been amazing both here and back home with all the love and support,” he said. “I thought I was a grateful person before, but now I am having a hard time wrapping my head around all the different blessings for which I am thankful. From our Centre family all the way to the different players and  coaches involved in American football in Ireland who have come to visit me in the hospital, to the medical staff here, everyone has been phenomenal.

“I’m truly thankful to be associated with such amazing people.”

The accident, he pointed out, could have been a lot worse — but it wasn’t.

“We could have easily broken our backs, sustained head trauma … And how miraculous that Colin was able to get reception and get us out of there! I don’t spend a ton of time trying to understand God’s plan,” Conley said. “Instead I look for all the different blessings for which we are grateful and place trust in our creator.”