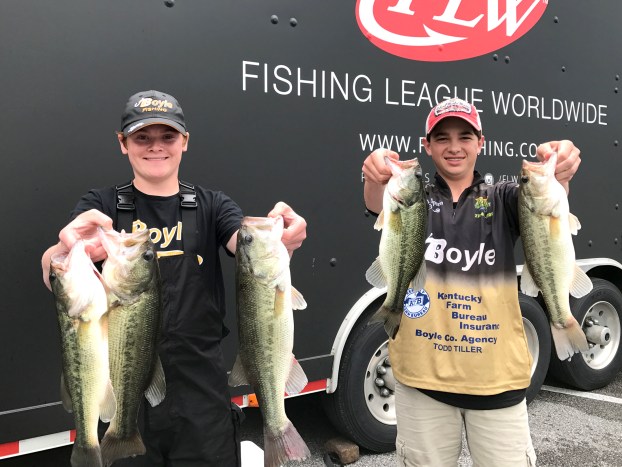 Every year in the state bass fishing tournament, Boyle County coach David Christopher has a goal of improving their finish. Two years ago, the Rebels finished 16th, and last year they followed that with a 15th-place showing.

And it all looked good after the first day of the tournament last month on Kentucky Lake. Sam Clark, Daniel Notter and Cooper Kreider were sitting in 10th after catching five fish totalling 16 pounds, 11 ounces.

Day two, though, was a different story. The fish weren’t biting in the bushes and trees, the area the Rebels had feasted upon a day earlier, and they caught three fish weighing 6 pounds, 6 ounces.

All together, their total weight of 23 pounds, 1 ounce put them in 31st place after the two-day tournament.

“I would say we definitely all felt like we left something on the table after the tournament,” Christopher said. “One day one, Sam, Daniel and Cooper’s boat were in tenth place. We felt good about what we were doing. Day two, both boats had a tough day. We didn’t get the bites we needed.”

Christopher said the lake was flooded so there was an effort to get as much water out as possible. That shifted the prime spots for landing fish out into the ledges, an area Clark said they weren’t familiar with.

“Our main area got pounded and there were a ton of fisherman fishing it,” Clark said. “… The ledge fishing and fishing offshore, we’ve never done that before.”

With that in mind, Christopher and Clark were back on Kentucky Lake fishing the ledges Friday, in preparation for another tournament this weekend.

“We’re trying to figure out how to do that,” Christopher said. “It’s a Tennessee River chain lake and ledge fishing is a factor.”

Practices are important for bass fishing teams, giving them an idea of the best areas to fish during the tournaments.

“People don’t realize it’s like a scouting report for anything else and your two days of practice are to gather information,” Christopher said. “You’re trying to gather information like you were scouting a football team, ‘What are their tendencies? What are they going to do?’ That’s what we’re trying to do when we come, especially when you come to a lake you don’t fish all the time.”

Taylor Harris and Braxten Beasley of Muhlenberg County won the state title with a total weight of 38 pounds, 10 ounces. According to Christopher, that makes four out of five years a team from within 20 to 30 minutes of the lake have won the title.

“A lot of us coaches are saying it’s not football, it’s not basketball, there’s a huge thing called home court advantage,” Christopher said. “… It’s definitely stacked against us when we come, but we come down here with the intent to win.”

There was disappointment for the Rebels in not only failing to win but also failing to improve their finish. Those feelings were even greater after a solid region tournament — Clark, Notter and Kreider finished seventh with five fish weighing 13 pounds, 11 ounces.

“We were disappointed with our finishes,” Christopher said. “Sam, Daniel and Cooper just didn’t get the bites they needed on day two.

“Fishing is a game of ounces. One pound here or there makes a huge difference in where you finish.”

The good news for Boyle, all five anglers who qualified for this year’s tournament will be back next year. And the goals won’t change.

“These kids have learned a ton,” coach Christopher said. “We always say we wish we knew how to fish like they do at their age. We keep saying the fish might not have a chance in ten years.

“There’s no doubt this has been a building process.”

A pair of local pitchers picked up All-State honors when the teams were announced earlier this week by the Kentucky... read more