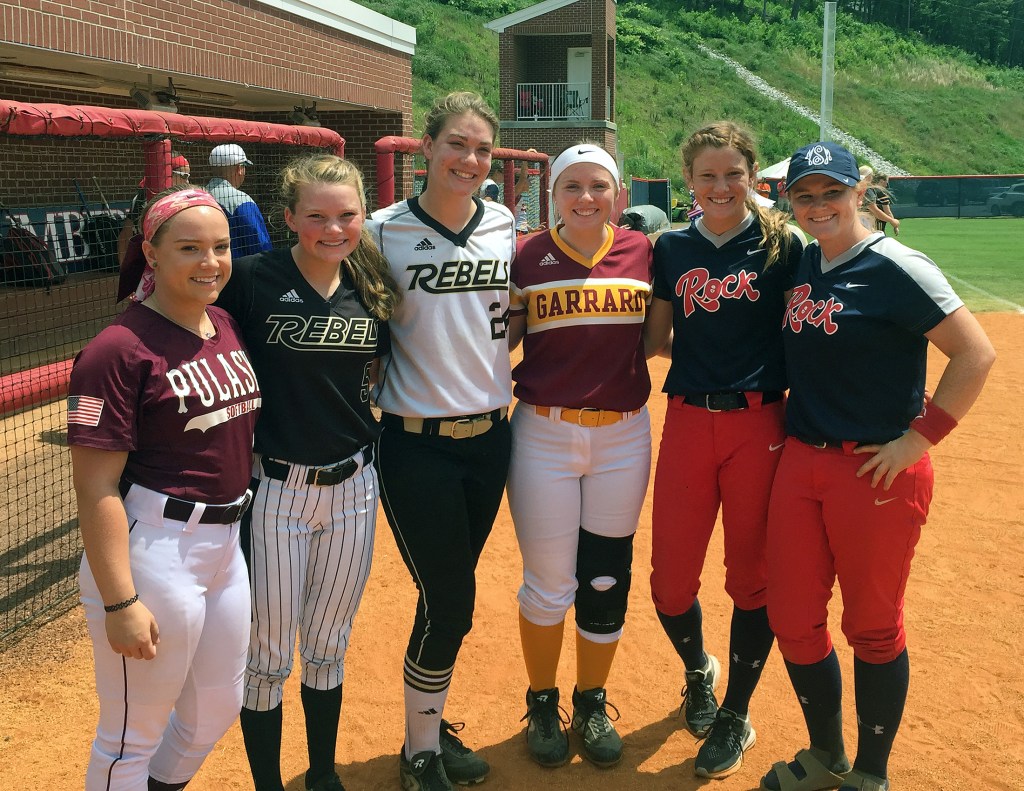 For the fifth straight year, Boyle County had at least one representative at the Kentucky Softball Coaches Association East-West All-Star game, and this year it was two players — McKinley Rush on the senior team and Mattie Robbins on the junior team.

Garrard County’s Elle Montgomery was the first Golden Lions player selected to the team by a panel of coaches since 2010.

The teams played three games over the weekend at the University of the Cumberlands, two on Saturday and another Sunday. On Friday, each team had practice and followed with a pizza party for players and coaches.

“It was an amazing experience to play with and against some of the best players in Kentucky,” Robbins said.

While Robbins suited up at catcher for the Rebels, she played in the outfield for the All-Star team, which had four catchers on the roster. She said playing in a different spot was good to show off her versatility.

While Rush has been a pitcher through most of her Boyle career, she spent time in right field for the All-Star game.

“It was interesting, it was a whole new perspective,” Rush said. “I appreciated that, it was really cool to see it from that way.”

Rush spent a good portion of her senior season injured, so getting nominated for the team was an honor in itself.

“It was a goal at the beginning of the year, and I didn’t know how that would play out after I got injured,” she said. “I was really excited I was able to be nominated and that people around the state of Kentucky trusted in me enough and saw the potential in me to put me on the team even though I was reserved injured at the time.”

Rush received one special honor while at the games — she received the Vernon Bibb Scholarship for the east team, which was voted on by the Kentucky Prep Softball board. Bibb was a longtime coach and instructor in Kentucky, and he’s in the KHSAA Hall of Fame.

Each winner received a $1,000 scholarship. According to the scholarship criteria, “These individuals fortunate to receive the scholarship will be well-rounded, positive role models who have demonstrated excellence in academics, school and community involvement, character, sportsmanship and citizenship.”

“I am so appreciative of the award and want to thank them for investing in my collegiate future,” Rush said.

While she spent games patrolling the outfield, Rush went through some pitching practices. Along with that, so many aspects of the game make the trip to Williamsburg worth it.

“It was cool to see the other pitchers come in and how they worked as well,” she said. “As a player, you always grow. I learned how different people call different pitches, especially last year. I learned what atmospheres, how those change between high school ball and (college) and travel ball and also the All-Star game. The experience alone, you learn things like who cheers, how cheers change, how attitudes and coaching styles change throughout the state of Kentucky. I always learn different pointers from the All-Star game.”

This was Rush’s second year in the All-Star game after being named to the junior team a year ago. She saw many of the same faces and said the competition in the games show how much Kentucky has grown as a softball state in her four years at Boyle.

She credited coaches and instructors from around the state, including Bibb, who’ve helped the game improve.

“Just within my four years of high school softball, it’s changed from ‘OK, let’s go to Tennessee, let’s go to Florida to get high level competition,’ but now you can stay in Kentucky and get some of the best competition in the nation,” Rush said.

“Every experience is different, but I was more prepared this year,” she said. “I knew what was going to happen, I knew the time frame. I was excited for it. Knowing how well it went last year made me even more proud and honored and humbled to be there this year.”