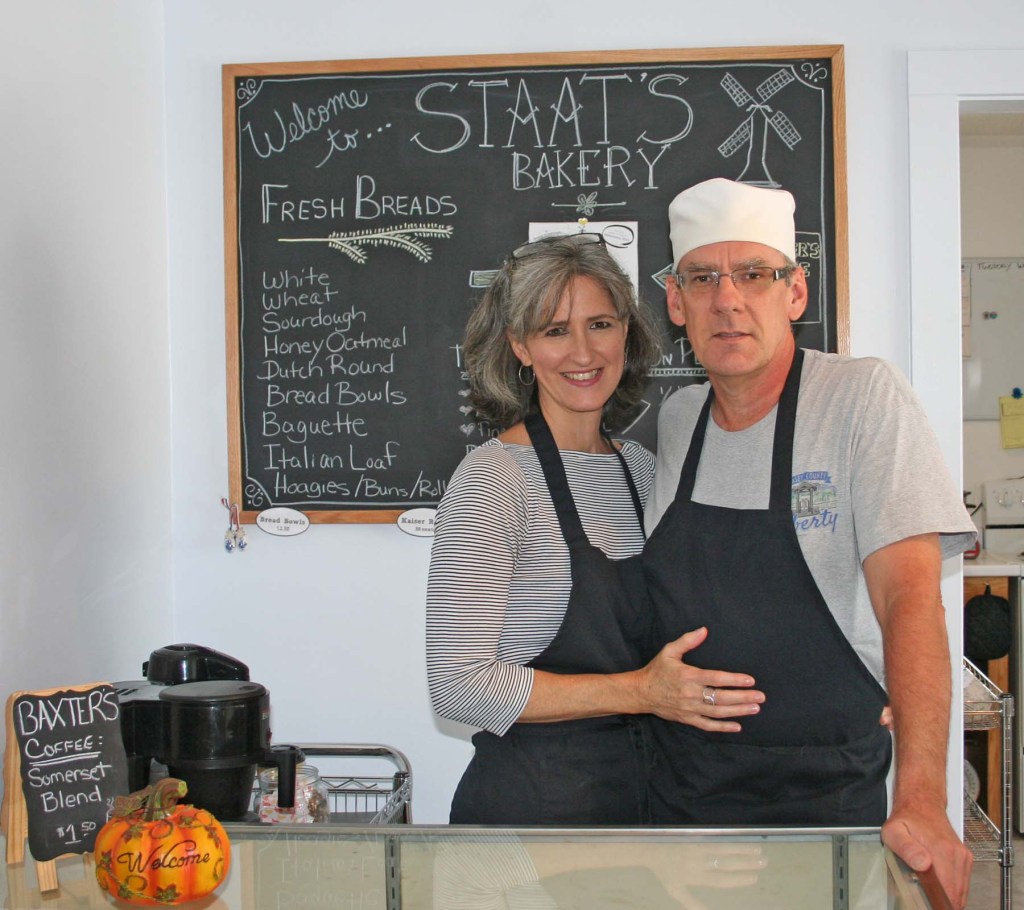 Kendra Peek/kpeek@amnews.com Catherine and Blaine Staat are the owners of Staat's Bakery, which calls Liberty home.

Tucked away in a little white house on Beldon Avenue in Liberty is Staat’s Bakery, where Blaine and Catherine Staat produce traditional bakery-type goods, as well as some more unusual items, such as biscotti, shortbread and stroopwafels.

“We make stuff other people don’t make, so it’s stuff you can’t really get anywhere else,” said Blaine Staat.

After making the effort to quit smoking, Blaine began making sourdough bread as a way to keep busy.

“I can’t tell you how many batches we went through, but we were making sandwiches, talking about — ‘Wow, this would be really good,’” said Catherine Staat. “We’re big on good food, real food, real ingredients. Everything we make here is made from scratch. There’s no cans, no box, no mix.”

They use “all real stuff,” she said.

“We use organic coconut — not that we’re hung up on organic stuff, but the coconut you get in the store has a bleaching agent in it,” he said.

He said he doesn’t know if those bleaching agents will hurt someone, but why try it when you can go chemical free.

“It’s like someone coming into our house,” Catherine Staat said. “You want to serve your guests the best food.” 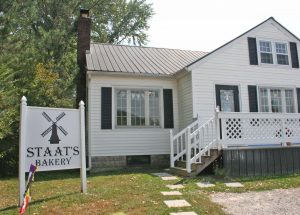 That was part of the decision behind the location for the store in a house, giving it a cozy feeling.

They also use their store as a place for local and Kentucky Proud vendors to show off their own products, including local cheese and meats, pottery and more.

“It’s nice to be able to say, ‘I’m in a store.’ That’s one of the hardest things to do,” Staat said. “If we can help someone else out, it’s totally worth it.” 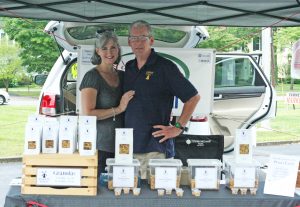 She said they wanted to be that location for others because they understand it can be hard. Getting started, getting the name out there, deciding on labels, packings and more — those are one of the hardest part of starting a business, Staat said.

“And if you don’t produce enough of a product it’s hard to get in a store,” she said.

So, they opened their doors to those small businesses, placing products alongside their own bakery-fresh items.

Of all the things the Staats make and sell, their biggest hit is their granola. Orders ship around the country — Wyoming, Florida, Washington — and across the state of Kentucky.

“We’ve had people drive from Lexington and Louisville to Liberty, just to try our granola,” Blaine Staat said.

It comes in a classic black and white package, and current flavors include almond-raisin, pecan-cranberry, pineapple-walnut and peanut-chocolate chip — “a candy bar in a bag,” said Catherine Staat. It can be used in yogurts, smoothies or even on salads, she said.

It’s become such a hit that select stores in Liberty and around the state — Berea, Columbia, Campbellsville and Pikeville — have begun carrying the product, including Cerci on Main in Danville. It’s even available in Texas.

“We were open about a year and half, two years. We had great feedback on our granola. On our other stuff, too, but our granola has been our lead on everything,” said Blaine Staat.

He said they love Liberty, but being a town of 2,000 people puts a limit on the reach of the products. So they started going out to farmers markets and visited a few around the state before deciding to fully participate in the Boyle County Farmers Market, at Danville High School.

They said they love the market.

“This is a great location,” said Catherine Staat.

It’s become a little community of farmers, makers and artisans, she said — if someone is absent, they all notice and want to ensure they’re OK. It also gives the Staats a chance to speak with customers and get feedback, as well as talk with other sellers about the best places to get needed items, such as bags.

They’ve also become big proponents of one another’s brands, and the Staats said they do a lot of their shopping at the market.

“This is the kind of stuff that we eat, and these are the kind of people we like to do business with,” Blaine Staat said. “Everything out here — and we like to think we fall into this — it’s all good, quality stuff … It’s good stuff. We get to talk to the people who raised it, made it, baked it, and we get to ask questions about it.

“Come on down and see us. There’s great stuff here.”

Staat’s Bakery, at 58 Beldon Avenue in Liberty, is open 10 a.m. to 4 p.m. Tuesday through Friday. From 9 a.m. 1 p.m. Saturdays, the Staats can be found at the Boyle County Farmers Market, located at the Danville High School, with their specialty granola, and a few select items, such as Kentucky-shaped butter cookies.

Their granola can also be found in select shops in Liberty and around the state, as well as at Cerci on Main in Danville.

It can also be shipped.

To learn more about Staat’s Bakery, find the business on Facebook, or visit staatsbakery.com. 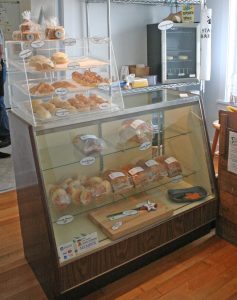 Kendra Peek/kpeek@amnews.com
Some of the wares found in the Staat’s Bakery, many from Staat family recipes. 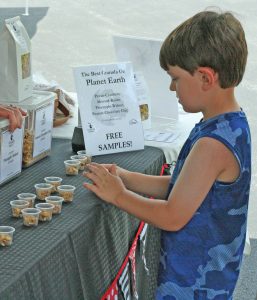 Kendra Peek/kendra.peek@amnews.com
Leotis Look, picks out which granola he wants to try of the Staats Bakery granola.